The Boom in Biking Benefits Everyone, Not Just Bicyclists - Shareable
Skip to content 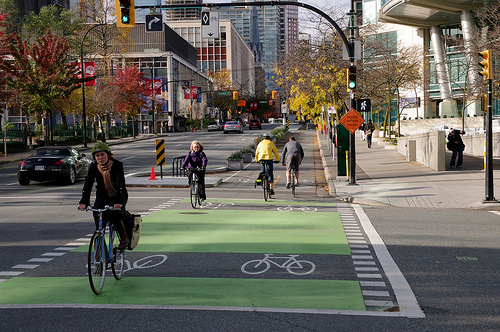 For the past year powerful voices around Washington have singled out programs to improve biking and walking as flagrant examples of wasteful government spending.

But yesterday (March 29) the U.S. House of Representatives—the hotbed of opposition to bike and walking as well as transit programs—voted to extend the current surface transportation bill for another three months, saving the funding of bike and ped programs. The Senate followed two hours later.  (This marks the 9th extension of the existing transportation bill since 2009 and another victory for the growing movement to ensure federal support for biking and walking projects.)

The political forces that want to steer policies back to the 1950s—when cars and highways were seen as the only way to go—have consistently failed to muster enough votes to shift federal transportation funding into reverse. There are several reason for this, but one of the most surprising is the emergence of bicycle advocates—and to a lesser extent pedestrian advocates—as a persuasive political lobby.

Groups like the Alliance for Biking and Walking , the League of American Bicyclists, America Bikes, Bikes Belong, Rails to Trails Conservancy, People for Bikes, America Walks and others emphasize the message that the biking and walking benefit everyone, not just folks who ride and stroll frequently. They’ve earned the attention of a growing bi-partisan bloc of Congress members, which makes the prospects for continued federal support of bike and pedestrian improvements much more likely than anyone expected last year.

The core of their message is plain common sense: All Americans are better off because biking and walking foster improved public health (and savings in health care expenditures for households, businesses and government), stronger communities and local economies, less congestion, safer streets, lower energy use and a cleaner, safer environment.

While Congressional critics belittle bicyclists as a marginal, almost silly special interest group, others herald them as self-reliant citizens who get around without the need of imported oil and mega-highway projects that cost taxpayers billions. Instead of a boondoggle, continued funding to improve biking and walking conditions in the U.S. represents a sound investment that saves taxpayers money now and in the future.

Even if you will never ride a bike in your life, you still see benefits from increased levels of biking. More bicyclists mean less congestion in the streets and less need for expensive road projects that divert government money from other important problems.  Off-road paths, bike lanes, sidwalks and other bike and ped improvements cost a fraction of what it takes to widen streets and highways. It’s proven that bicycling and walking increases people’s health and reduces obesity, which will translate into huge cost savings for government and a boost for our economy.

Higher gas prices (which have topped four bucks for the third time in four years) means more Americans are looking for other ways to get around. Bikes offer people more choices in transportation. This is especially true for people whose communities are not well served by mass transportation or where distances are too far to walk to work or shopping.

The number of Americans who commute primarily by bike leaped 43 percent since 2000 according to census data. The number of overall bike trips rose 25 percent.

But for those numbers to keep climbing—and the benefits for all Americans to continue accumulating—people need to feel safer on their bikes. Seventy-one percent of all Americans report that they would like to bike more than they do now, according to U.S. Highway Safety Administration data. But many of them fear riding on busy streets with speeding traffic.

Sharing is the best way to help these people feel safer. By historical tradition and legal decree, streets are not for the exclusive use of moving and parked cars. They are shared space belonging to everyone.

The Green Lane Project, which will launch in May, is an initiative to reclaim a bit of streets for bicyclists. The goal is to pioneer 21st century streets in six cities where bike lanes on major routes will be protected from heavy traffic by curbs, posts, parked cars or paint. This could do for bicyclists what asphalt roads did for cars a century ago.

The report cites data from the U.S. Department of Transportation showing that rural Americans bike only slightly less than their urban counterparts, and much more than people living in newer suburbs. Here are two particularly surprising findings.

As the CEO of the Billings (Montana) Chamber of Commerce John Brewer told a Congressional hearing last year. “Talented people are moving to Billings in large part because of our trail system that creates the quality of life they are expecting….Trails are no longer viewed as community amenities; they’re viewed as essential infrastructure for business recruitment.”

This story is adapted from remarks Jay Walljasper gave at the National Bike Summit in Washington, D.C. on March 21.