Portrait of a Shareable Street in Progress - Shareable
Skip to content 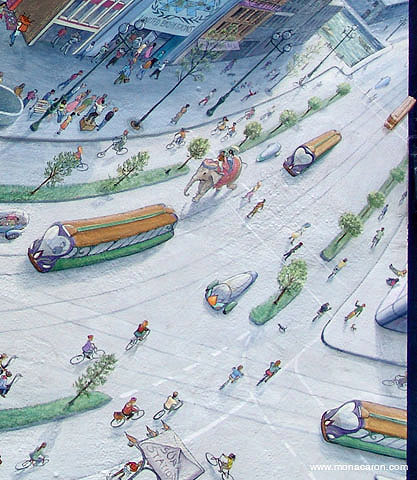 Market Street is San Francisco's main thoroughfare. In some ways, it's evolved as a classic example of a non-shareable street, one dominated by motorists, which fractures community and hurts our health. But the redoubtable Streetsfilms has made a lovely seven-minute video (below) about efforts to turn Market Street into a great public place, which I share with you as a kind of case study in building a shareable city, "an affirmative and assertive cultural effort to expand the realm of sharing, cooperation, mutual aid, and solidarity."

Says Streetfilms: "Now, as the Better Market Street Project moves forward with trial traffic diversions, the Art in Storefronts project, music and programming in public spaces, greening along sidewalks, and pedestrian safety improvements, San Francisco's political class is intent on revitalizing the street for the long haul. Though the concrete vision for what Market Street will eventually look like is some ways off, there is more effort now than in many years to improve the public realm and ensure the street lives up to its great potential."