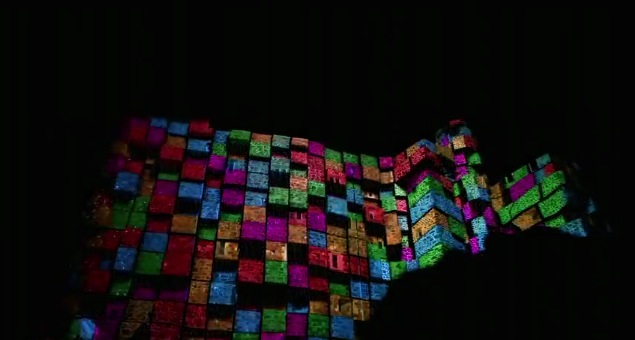 This remarkable video of a 3D projection against Branchage Castle in Britain has been making the rounds, courtesy of GOOD. Against an imposing medieval facade, arts and technology collective Seeper projected a dance of color and shapes that reimagines an ornate public space as a canvas for post-Millennial digital art:

3D projection techniques are being using not only in public spaces, but in theater and even film, to lend a new dimension to works of art. Any surface becomes a medium when digital imagery is projected against it, making 3D projection a thoroughly contemporary mixed-media form. The results can be transfixing, as they are in SCINTILLATION, a short film by Xavier Chassaing:

But 3D projection's most intriguing application may be as a tool for activists and guerrilla artists. The walls of power can be transformed into canvases for activist messages, as Occupy Wall Street protestors recently demonstrated:

Urban Projection is a blog devoted to guerrilla projection for street artists and activists, documenting projects such as as the Light Rider, a DIY "urban projection mobile unit" that bolts a laptop, projector, battery and sound system to a modified tricycle:

Despite these activist and guerrilla art applications, 3D projections can also be harnessed for pure fun and wonderment. As we head into Halloween weekend, it's appropriate to close out with the technology conjuring the undead and providing some good old-fashioned thrills and chills: