Portland’s circular economy is primed for success. Can it offer a blueprint for the rest of us? - Shareable
Skip to content 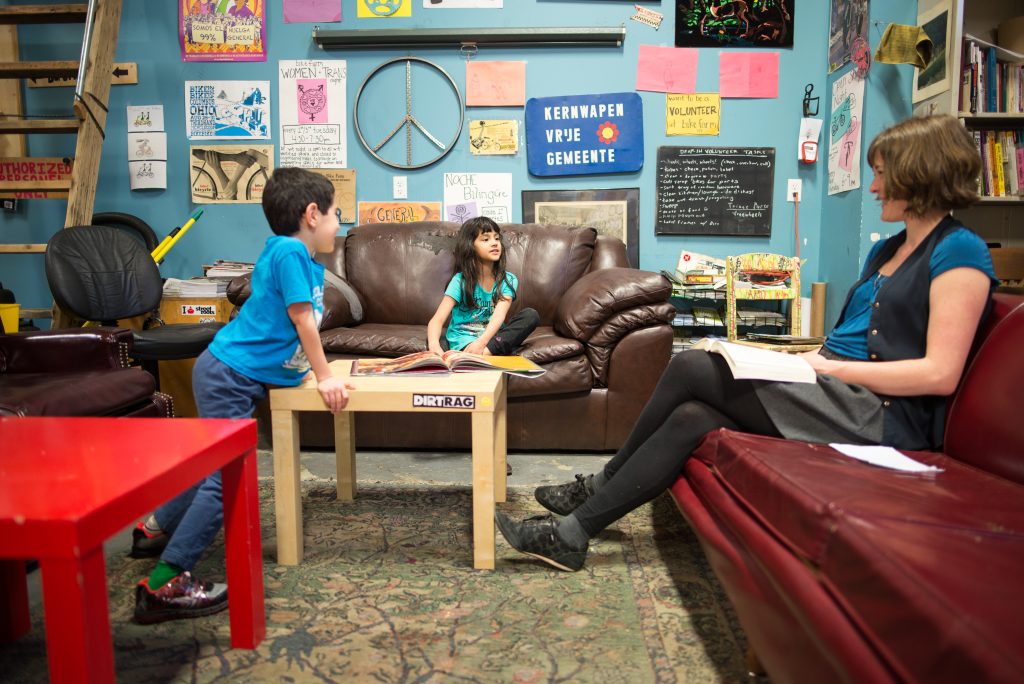 This year’s climate conference, COP 27, focused a lot on loss and damage compensation. The question of who should foot the bill for our current climate crisis has highlighted a growing conversation around planetary boundaries and collective responsibility.

The disparate impacts of historical emissions on Global South communities show us that pushing waste, emissions, and externalities out of sight isn’t only unjust, it’s unsustainable. And while these problems continue to unfold on a global scale, each country, city, and locality’s role in perpetuating them — or helping to craft solutions — has been brought to center stage.

Sustainable waste reduction requires a transition from a linear economy — one where goods get used for a short period and then wind up in a landfill — to a circular one that prioritizes sharing, repairing, reuse, and creative upcycling.

In the United States, the city of Portland, Oregon offers some leadership in terms of what this might look like in action. The city boasts a lively network of partnerships between nonprofits, businesses, civilians, and different bureaus and layers of government.

Lauren Gross founded and runs the nonprofit Repair PDX. “The mission of Repair PDX is to spread repair culture,” explained Gross. “For the last nine years, that looks like holding repair cafes, which are repair events where volunteers fix people’s broken household items for free.”

But Gross knows better than to try to revolutionize Portland alone. She’s partnered with tool libraries and the City of Portland’s Fix-It Fairs so that Repair PDX can host pop-up repair cafes with the support of those who have resources, staff, or communications. Gross’ mutually-beneficial relationship with the City of Portland helps promote and increase attendance at her pop-up cafes.

What was nice about partnering with the City of Portland was that they do paper outreach. And that meant that they could reach a whole lot of people that we wouldn’t have access to. So it was a very diverse group of folks from all of the different communities that would come and attend those cafes. — Lauren Gross, Repair PDX founder

Gross’s Repair PDX works closely with six other nonprofits that call themselves, as a group, the Reuse Collective. This group includes a bike repair shop, a furniture bank, a reuse center, a creative reuse center, an electronics reuse and repair center, and an organization that diverts reusable materials from going to landfills.

Pooling resources makes it easier for these organizations to sustain themselves while expanding their reach and impact, so the Reuse Collective is focused on growing together. “Everybody needs a lot of space right now,’ explained Gross. “We’re all working on potentially finding space together to create a reuse depot.”

The role of government and municipal power

Recently, there has been more effort from the City of Portland to assist reuse-focused nonprofits like Repair PDX with resources, research, and public education. Specifically, Portland’s Bureau of Planning and Sustainability (BPS) has been getting ready to scale up its collaborations with nonprofits and businesses in the area.

The mere existence of BPS is something of an innovation in how the government thinks about sustainable development: starting in 2009, the City of Portland started merging its city planning efforts with its sustainable development efforts under the guidance of former mayor Sam Adams, who understood that they were two sides of the same coin.

Since then, many informal (and some formal) collaborations have occurred between nonprofits, businesses, neighborhoods, and the government. In the past couple of years, there has been a more intensive focus on understanding what needs to be done to really ramp up the circular economy in Portland and the surrounding area.

To gain this deeper understanding, BPS commissioned a needs assessment to understand how local government can better serve the reuse and repair community. It found that “five major needs emerged as threads throughout these conversations: space and location; racial and climate justice; communications and marketing; capacity building and staffing support; and grants and funding.”

The City’s provision of marketing support and physical space for Repair PDX is a good start, but the scale of needs is still much greater. Resourceful PDX, a program of BPS, aims to maximize impact by prioritizing public education around reuse and connecting residents, nonprofits, and businesses with the resources they need to participate in a circular economy.

“These nonprofits need support from government,” says Alicia Polacok, Sustainable Communities Program Coordinator at BPS. “And something that we could do that was in our wheelhouse at BPS is the communications piece, the marketing or campaigns. Utilizing Resourceful PDX is kind of the way to do that.”

In the bigger picture, Portland is a part of something unusual in the United States: an integrated regional government. This regional government, known as Metro, sits between the city and state levels. Metro encompasses three counties and twenty-four cities and provides infrastructure and shared services that localities might not otherwise be able to provide well for themselves.

Metro gets its funds from taxes, bonds, and fees collected from bottles and when people drop their garbage off at the transfer stations, which is why it funds reuse and repair projects. “Ultimately, we’re saving the government money [by] keeping things out of the trash,” says Gross.

The transfer stations (dumps and recycling dropoffs) for twenty-four Oregon cities (including Portland) are operated by Metro. Much of the research funding and program deployment around circular economy and sustainable consumption comes from this localized governing body. Repair PDX and others in the Reuse Collective have even received grant funding from Metro to do their work.

“Metro’s a huge funder through grants,” explained Polacok. “The State of Oregon’s Department of Environmental Quality (or DEQ) also has a materials management grant statewide,” she added.

Similar to the BPS study but larger in scale, Metro is conducting its own reuse study for the region to better understand needs and how to fill them.

Creating a mindset of sustainability among the public is not easy work, nor does it happen very quickly. Cultivating a society-wide practice of sustainable consumption and development amidst a larger economy that prioritizes speed, novelty, and disposability is equally time-consuming.

The pandemic posed significant problems and setbacks for Portland’s government, nonprofits, and communities focused on sustainable consumption and a circular economy.

The necessity and proliferation of single-use items like masks and other rapidly manufactured PPE made sustainability workers question if the greater public would forget about one massive problem (waste) because of the threat posed by another (public health). The lack of physical social proximity also posed a problem for reuse and repair initiatives, which operate mostly as in-person support services.

Outsides of the effects of the pandemic, Repair PDX, and others in the Reuse Collective have pressing financial and material needs. “Folks are already using the Community Warehouse and ReBuilding Center, but they’re at their max capacity now,” said Gross. “We need more space, we need more infrastructure, we need support from government.”

Growing the circular economy — in Portland and beyond

Despite these challenges, Portland is still leading the way in developing a thriving circular economy. In fact, it has often led the way in sustainable consumption and reuse. Over 50 years ago, Oregon was the first state to pass a bottle bill, which mandated that a redeemable deposit gets paid on each bottle, incentivizing recycling and reuse. Portland also launched the first deconstruction policy in the United States, ensuring that materials are carefully taken apart and reused rather than smashed and taken to a landfill.

In recent years, many other sustainability initiatives have been initiated by people, nonprofits, and public-sector entities. A notable example is that of Clackamas County, which is part of the Metro area. The county recently integrated libraries of things into all branches of its public libraries, so residents can borrow more household items instead of buying them.

When asked about why Portland might be in some ways special for its inroads into expanding sustainable consumption, reuse, and sharing, and a circular economy in general, Polacok and Dabbs had some ideas. For one, the City itself takes an active role in fostering robust civic life.

“[Portland] had been known in the past for our large neighborhood network. explained Polacok. “We have ninety-plus neighborhood associations in the City of Portland. They are city-funded, volunteer run.”

Dabbs explained further: “That whole system of neighborhood associations and coalitions began in the ‘60s with people banding together to protest what was called the Mount Hood freeway… they didn’t want a freeway cutting through their neighborhoods and coming into downtown. So they banded together, and they won. And what replaced the freeway was the light rail system.”

What’s apparent from conversations with Polacok, Dabbs, and Gross is that all these efforts have been in the works for some time, demonstrating that building a better community, city, and Metro area involves sustained efforts over the course of many years, sometimes many decades.

Certainly, nurturing the social values that get people to think about and behave differently around consumption and waste takes time and multilevel action. Maybe your locality is far along in this process. Maybe it’s not. But as the saying goes, “The best time to plant a tree was twenty years ago. The second best time is now.”