How to start a tool library - Shareable
Skip to content 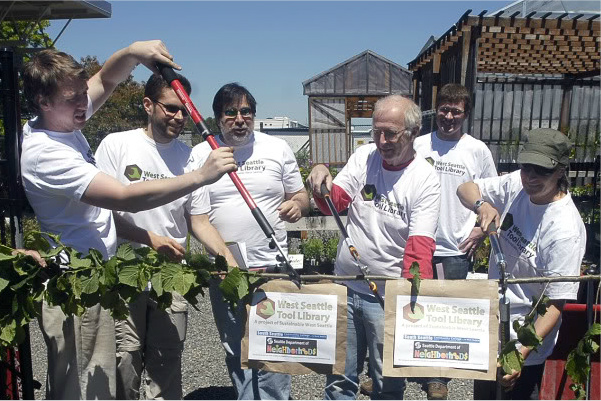 It might seem a little risky to lend out a bunch of power tools to those who probably don’t know how to use them. After all, tools can be dangerous, people can be idiots, and we live in an exceptionally litigious society. For some strange but very understandable reason, those concerns alone have been more than enough to effectively end many community tool libraries before they even start.

As the sharing economy continues to blossom, however, more communities are overcoming that inherent fear and establishing lending libraries to embrace the beautiful benefits of sharing with neighbors. Through Google groups, starter kits, and incubator workshops, new tool libraries now have the ability to overcome their inherent concerns by learning from the experiences of many who have come before them.

Though it seems like a relatively unique idea, around 40 community tool libraries already exist throughout the United States, from Philadelphia to Seattle and south to Oakland and New Orleans. Each has its own unique flavor but most operate roughly the same way by accepting tool donations from the community and then lending those tools out for free—or nearly free—to anyone capable of presenting an ID and signing a waiver. Through that basic setup, some tool libraries have been happily participating in the sharing economy for over 20 years.

While most tool libraries are more than willing to share whatever they’ve learned, a handful of libraries have recently led the charge towards making it increasingly easy for even the most cautious and underfunded communities to take up the challenge. Strangely enough, these libraries happen to be some of the youngest.

Michael Froehlich, for example, felt compelled to establish a National Tool Library Google Group a couple years ago, just after founding The West Philly Tool Library. By creating a space for common questions and answers, he hoped to not only provide greater access to lessons learned but also to manage the barrage of inquiries he was receiving.

“Almost immediately after opening our tool library, we were getting 3 to 5 requests per month for advice from others who also wanted to start tool libraries,” says Froehlich. “So many people had helped us get started, we certainly weren’t going to ignore their requests. But we wanted to figure out an easier, more efficient way for people interested in getting started to tap into the wealth of information from tool libraries across the country.”

In like fashion, the founders of The West Seattle Tool Library, myself included, also felt compelled to share everything we were learning in the planning and management of our own tool library. Since the first day we starting planning the project, our hope was to develop The West Seattle Tool Library into an easily replicable model for any individuals and organizations interested in starting their own version.

“The biggest reward for me is being a part of the amazing community of tool libraries, as well as all the makers, fixers, artisans, and neighbor s who use them,” says Gene Homicki, one of The West Seattle Tool Library’s founders, “I wanted to encourage that community’s growth by making sure that everyone who is interested in tool libraries has access to all the resources they needed.”

With that in mind, The West Seattle Tool Library set about creating a tool library starter kit. Our hope was that this kit would effectively comfort the worrisome souls who were either intimidated by the numerous details of the planning process or quite appropriately concerned about safety, liability, and security. The result of those efforts recently became its very own project, Share Starter, which has now hosted a handful of tool library incubator sessions as well as developed a free starter kit.

While inquiries on starting a tool library come from far and wide, The West Seattle Tool Library and Share Starter also constantly receive a large number of requests from our own region. By hosting local Incubators, we’ve actually been able to address those inquiries and efficiently share our knowledge in small, personal sessions with anyone in driving distance.

“The incubators really inspired us to get started on our own tool library,” says Susan Gregory of the newly-forming Northeast Seattle Tool Library, “We got good nuts and bolts information on how they organized their tool library, we were offered excellent support as we got up and running, and we were inspired by the success West Settle has had so far. Having a successful model to emulate has helped us to procure a space to use, has given us an example to reference when people are unsure of what we’re attempting to do, and hopefully will help us attain funding for our project.”

Partly as a result of the incubators, there are currently six other tool library projects underway just in Seattle alone and a handful more starting up throughout our region. The starter kit—including liability and membership forms, tool use policies, sample work plans, budgets, letters of support, and fiscal sponsor agreements—will hopefully allow all of these organizations to overcome the burdens and worries of moving their concepts on to the next stage.

Considering all the obvious benefits that tool libraries offer, from encouraging neighborhood development to serving as a great foundation for the sharing economy, it’s rather a shame that there isn’t one in every neighborhood. Through the efforts of a growing tool library community, though, that situation seems to be changing rapidly. With all the resources now out there to tap into, and all the established tool libraries calming the fears, it’s quite possible that everyone will soon have a tool library just down the street. If that doesn’t automatically happen where you live, perhaps all these resources will at least give you the confidence to start building one of your own…and then share what you learn.