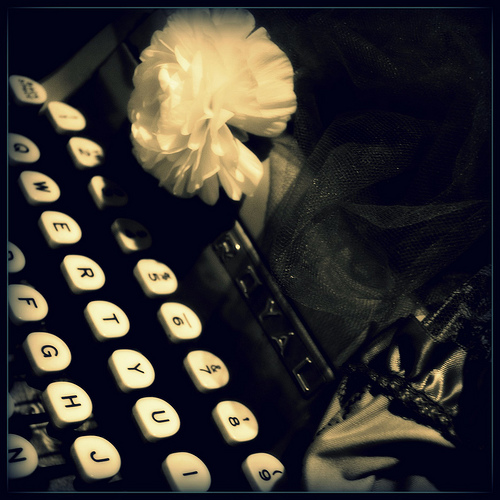 This is the final story in Mary Robinette Kowal's typewriter triptych. The first two are "A Type of Favor" and "Playing Against Type."

Gloria flexed her wrists trying to work some of the tension out of them while she waited for the propmaster to reset the scene. How had secretaries used typewriters like this for hours at a time?

Her left hand was captured in a strong, masculine grip. Gloria followed the arm up to meet Chance Hendrix's eyes. He smirked at her with all the wattage of the dark eyes which had given him one of the highest recognition credits in his day. God. She'd had such a crush on him when she was a teen — but then so did all the other girls and most of the boys in her creche.

"May I?" He turned her hand palm up, and pressed his thumbs into the base of her hand. The deep umber of his hands made her own arms look pale and dead.

"Thank you." It took every bit of theater training to keep her voice steady.

He glanced over at the director. "Do you need a break?"

After the incident where they nearly lost the camera, Gloria was keenly aware of the time crunch facing the film. "I don't want to slow produc–"

"That's not what I asked. I admire your professionalism but you've been typing for two hours now." He lowered his voice and moved his thumbs in circles up the length of her wrist.

"I can ask for a break and it won't reflect on you." The smirk reappeared. "He owes me. Balance of favor…"

Her wrists did ache. Gloria chewed the inside of her lip at the temptation but shook her head. "It won't be that much longer."

"And then your scene will be finished, you'll be gone and I would… I would take it as a favor if you stayed a little longer. Let me do this for you so the scales are balanced."

"I enjoy flirting but not with people I can't take seriously. You do good work."

"You know I can't believe anything you say, since you admitted to flirting."

"This?" He held up her hand. "I haven't started yet. And yes, I'm cocky but being nice is purely a business decision."

"Oh?" She couldn't wait to see how this line of logic played out.

"Second rule of show business. Be nice to everybody, you never know who they'll be later. That favor might be useful to have." He released her wrist and beckoned. "Other hand."

She gave it to him, sighing as his fingers dug into the ache. "That begs the question: What's the first rule?"

He squeezed her hand once more and released it. "Remember where you came from." Standing, he stretched his arms over his head, showing off his still taut physique. "Harold! I need a little break before we start again. Can we stop for lunch early?"

Stammering, Harold dismissed the crew. Not for the first time, Gloria wondered how he had managed to accrue enough favor points to score Chance, even if the star was on the downswing of recognition creds.

Chance turned to her and smiled again. "See, that was easy and doesn't slow us down."

She arched an eyebrow and tried for her best Bond girl purr. "I suppose now you expect me to have lunch with you, Mr. Hendrix."

"It would please me."

"Well then…" She lowered her head and looked up at him through the eyelashes in a move that she'd practiced a hundred times. It brought out her cheekbones and made her eyes look huge. "I suppose you have a date."

Two minutes after the film went live, Gloria's vanity search pinged with the first review. Her five-minute scene had been noticed. Ten minutes after that, Chance Hendrix emailed to ask if she had lunch plans.

A man that Gloria had never met stopped next to her seat in the Broadway co-op's cafeteria and put a small pressed paper tray in front of her. It held five neatly-wrapped caramels centered in it.

"Enjoyed you in 'Last Dime'." He nodded to the tray. "Salt caramels. Made 'em myself."

"Oh!" Gloria pressed a hand to her breast in astonishment, the actor part of her brain noting that, apparently, people really did that when moved. "Thank you. I'm touched." She was overwhelmed, truly. This was the first Practical Thank You she'd gotten from someone who didn't know her. Not that she was going to let him know it was her first PTY. It would undermine her cred.

"Well, I enjoyed your work, so, you know." He shrugged and nodded at the caramels. "Practical Thank Yous make the world go round."

Gloria was fairly sure she responded, but couldn't remember what she'd said after he was gone. The steno girl had been a bit part, but Gloria had wanted it anyway because it gave her a chance to appear on the screen with Chance Hendrix. It must have taken Harold crazy amounts of favor creds to do it. He must know somebody, who knew somebody, because she sure as hell had never heard of him.

And really, that obscurity had worked in her favor. After all, if he'd been better connected, she wouldn't have had a shot at the role, since it would have gone to a Known.

"Well that was nice of him." Across from her, Chance rested his elbows on the table. "First time?"

She nodded, only just realizing that the gift had not gone to Chance, but to her.

"Thought so. I recognize the goggle-eyed look." He reached across the table and squeezed her hand. "Get used to it. You're on the upswing."

Gloria stared at the salt caramels, thinking of Chance's first rule of show business. "I suppose it would be silly to save these as a memento."

Chance laughed. "Yes. That would be very silly." He tapped the tray with his free hand. "These are the fruits of your labor. Enjoy them."

She handed him a caramel and when he raised his eyebrows in question, she said, "Second rule of show business. Be nice to everyone. Would you like a caramel?"

When Gloria checked her email next, there were PTYs in the form of transferable clothing credits, spa services, and a healthy increase in her tip jar.

All for a part that had her onscreen for ten minutes.

Her next role was a lead. So was the role after that. 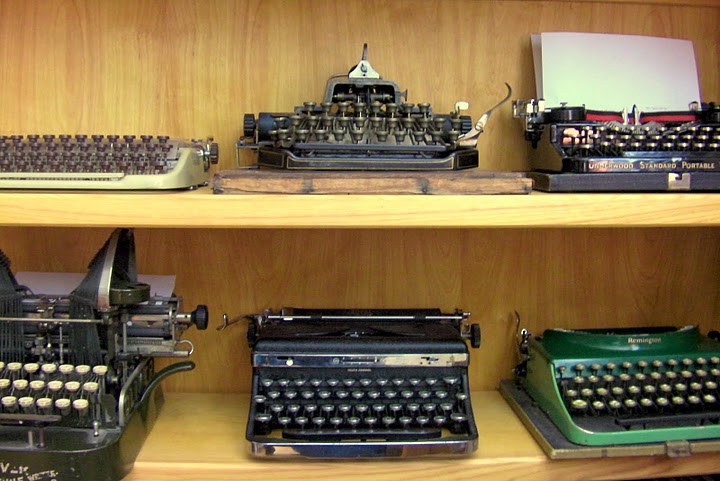 Gloria stopped so suddenly that Chance's hand slid out of hers. She backed up a few steps and peeked through the door of the cubby they'd just passed.

Shelves filled the walls with typewriters. Gloria had no idea so many different ones existed. Most were black and glossy, but the shelves also held gleaming red, green and silver ones.

"Can I help you?" The typewriter lady from Last Dime lifted her head from a machine she had disassembled on the table.

"I do." She tilted her head, waiting. What was her name?

"Could I…" The words were there before she could understand the impulse. "Could I borrow a typewriter?"

The typewriter lady chewed the inside of her lip for a moment and then nodded, stepping back. "Which one?"

Gloria stepped into the cubicle, completely entranced by the walls of machines. Chance followed, silent and bemused. The typewriter she'd used in the film had been battered and looked its age. These all could have come off the assembly line that morning. She drifted over to a pebbled black one with chrome details. "How many do you have?"

"Thirty-six. Plus some parts machines." She– Jenn. The typewriter lady's name was Jenn — she nodded to a stack of paper on her desk. "You want to try that one?"

"No. Thanks. I was wondering if I could borrow the typewriter I used in the film. Long term."

Gloria looked back at Chance, who seemed to have gone unrecognized by Jenn. The longing articulated into his first rule of show business. "I want a reminder of the film." Jenn nodded. "All right. You were gentle with it." She pulled a case off one of the lower shelves and held it out to Gloria.

The worn leather handle fit comfortably into her hand. "Thank you."

Back in the corridor, Chance took her free hand. "First rule?"

Gloria nodded, suddenly shy about her reasons. But when they were back in her cubby, she took out the typewriter and slid a piece of paper into it.

She typed three words and showed them to Chance. He smiled, wrapped his arms around her to reach the keyboard and typed them back.

Mary Robinette Kowal wrote most the typewriter triptych on her collection of manual typewriters!