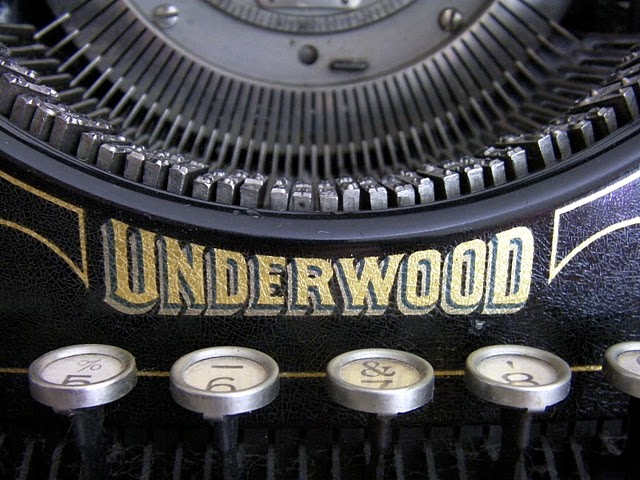 Like most of the co-operatives that sprang up after the Oil Wars, the Broadway co-op had a specialty. While other co-ops might focus on medicine or music, the Broadway members created and exported films to the commercial world. In exchange for pooling their time and resources they were able to have a higher standard of living than any independent artist. But of course, even an economy based on sharing and cooperation demands sacrifices…

Jenn stared at his chin, focusing on the stubble and hoping that her distaste didn't show. Why had she borrowed Harold's tools? Now she owed him.

Harold's request to borrow one of her typewriters for the film he was making was perfectly reasonable, but this did nothing to keep the sour taste out of the back of her mouth. When she'd traded borrowing points, she hadn't thought the typewriters would be in danger. No one used them anymore. She'd thought she was throwing skills or tools into the communal pot when she immigrated to this co-op. At her old one, no one cared about the typewriters. Was there a way she could say "No," plausibly?

"These are very delicate machines." She stood between him and the — not collection — the group of typewriters on the shelf of her cubby. Past the four short walls the constant murmur and hum of the Broadway Cooperative continued without regard for them. She stared past Harold, focusing on the vertical gardens covering the cooperative's walls. The cascading waves of green served as a balm of predictability.

Harold's head bobbed like a stork on his thin neck. "I know they're fragile. They're, like, ancient. Which is perfect. I mean. Completely. When I saw them on your application I said we had to have you." 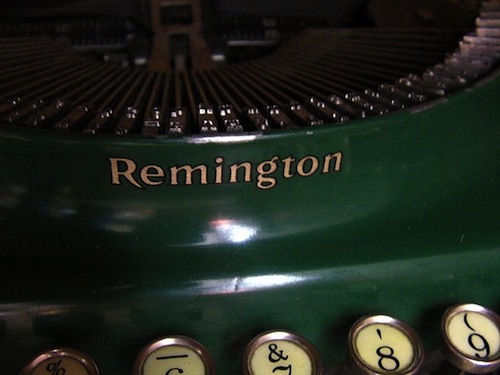 Jenn jerked her full attention back to him. Her immigration application had been approved because of the typewriters? Her stomach twisted.

Harold paused, clearly waiting for her to hand him a typewriter the way you'd share a blanket or a terminal. "Won't it be nice to see one of them being used?"

It would not. Not by someone who thought that typing meant using a touchscreen. Not by someone who had no understanding of the way to return the carriage or use the tabular settings without letting the carriage thwack against the metal stops. Or who would type too fast and jam the keys together. But she owed him. Dammit. Her hands tightened into fists. "Which one?"

Harold grinned, bouncing onto his toes. "Rad." He edged past Jenn, no longer paying much attention to her now that she'd agreed. He stopped in front of the spidery frame of the Blickensderfer #8 and his eyes widened. "Oooo. How abo–"

"No." The word was out of her mouth before she realized it.

Harold raised his eyebrows in surprise at her blatant refusal.

She tucked her hair behind her ear and could hear her creche-mother singing, "Sharing is caring." Jenn cleared her throat. "It's not a QWERTY keyboard. Hard to type on."

"Oh." His head bobbed again and she felt the curious urge to set out a bowl of fish.

"How about this one?" The Groma Kolibri lay in front of his outstretched hand, fingerprints hanging in the air above it. 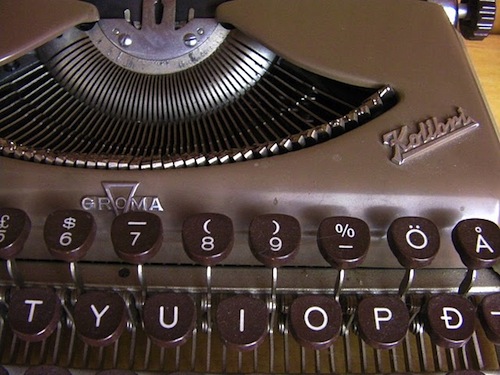 "A German machine. When is your film set?"

"1928. See, they had a couple of stock market crashes back in the 20th century, but that was the first and, like, no one saw it coming. We're trying to create a metaphor between the greed and corruption that led to the first crash and the climate before the Oil Wars started. See both times led to an aftermath in which people lived locally and shared with their neighbors."

She only half listened to him, slowly becoming aware that there might be a way to say "No" after all. "As I recall, the stock market crash led to the Great Depression. A lot of people starved."

"Not in places where people shared their resources. And that's what our guy does"

"He shares?" Half of the typewriters were safely out. They were made after 1928. 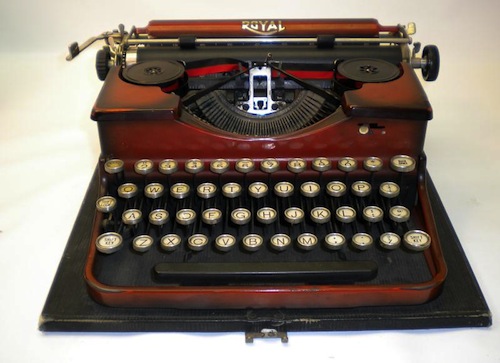 "Not at first." Harold's finger pressed the H key on her Duotone Royal and Jenn grunted in dismay. The H lifted and struck the bare platen, pressing into its unprotected surface.

"You'll scar the platen doing that. Look, whichever one you pick, let me teach the actor how to use it." She held up her hand to stop his protest. "For authenticity. Someone who grew up with these would know better."

"You'd do that? That would be so rad. Major joules to that idea. I'd owe you, of course."

She didn't care about the favor, she just wanted to keep him from harming any of the typewriters. Jenn inhaled through her nose, trying to ease the tightness in her chest. Authenticity. That was her key. "Why don't you tell me more about your hero. Is that who uses the typewriter?"

"Yeah. See, he's a newspaperman — kinda like an old-school aggregator — and he travels around–" 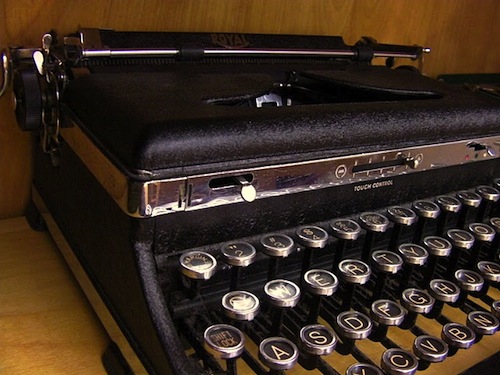 "Ah! That changes everything."

"You need a portable. I only have three of those." She pointed to the Smith-Corona Sterling. "1942." She traced a finger down the black powder-coated curves of the front. "I'm sure you can see how the lines are all wrong."

"Oh, it is. But if you look at the Woodstock on the shelf above, you can see that the finish is a glossy black enamel. That's what something from your period should look like. Too bad that one isn't a portable." She feigned regret. "This powder finish would stand out on your set."

"You think it really matters? I mean, most people haven't ever seen a typewriter outside of a museum." 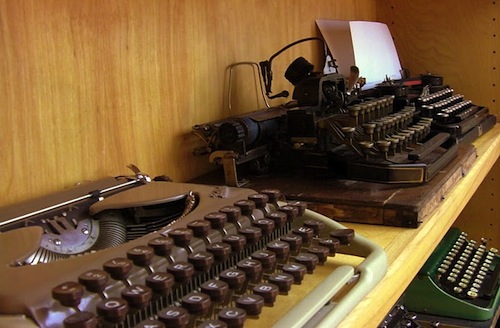 "Even if people didn't know why, they could tell that it didn't belong." She searched for a metaphor he'd understand. "Like… if you saw someone wearing a pair of garrowed nazes to a ball game, what would you think?"

"I'd wonder where the rest of the dance team was."

"Why? A naze doesn't look that different from a catcher's mask. Just the garrowing, really."

"It would stand out. I'd be doing you a disservice if I let you use the wrong machine."

"No." Jenn shook her head. She had eyed a folding Hammond but it had too much rust on the body for her taste. 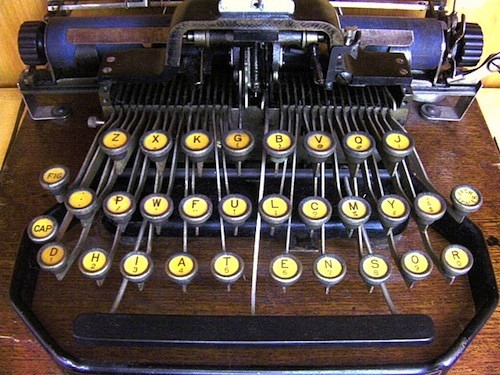 "It could be an older machine. One that he's had a long time. Sorta battered, you know."

She kept her gaze away from the aluminum Standard from 1904. "All of these are in mint condition. It doesn't sound as if any of them would do."

"That's okay. Our prop guys can always distress it."

"You know, smear dirt on it. Maybe some travel stickers to show where he's been. Stuff like that."

"I said these were mint." She shoved her hands into her pockets and dug her fingernails into her palms. "They won't be if you smear dirt on them and stuff. It would destroy the value of the machine."

Harold laughed. "Value? What value? They aren't worth anything if you don't use them. Jesus, what's with you? You borrow tools from me all the time. That's what they are for, to be used. I'm asking to borrow one typewriter and it's not even something you use. It just sits here gathering dust."

Her gaze went to the glossy sheen of the Underwood next to her, fingers itching to wipe the surface clean, but not a speck marred it. It might look like the typewriters had no use. No one needed typewriters when they instant access to clouds of data around them. No one needed a machine that was beyond wireless. No one else ever needed to borrow them. They were order amid constant change. 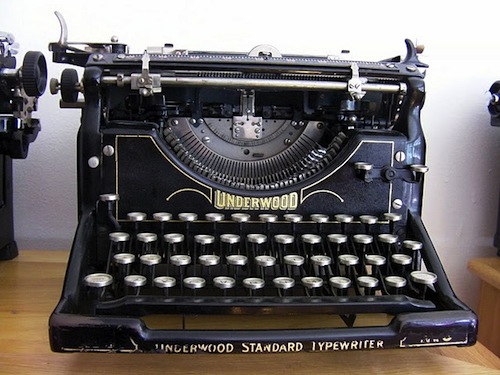 And if she said "No" then when she went to borrow something from Harold, he would remember. He would tell someone else. Jenn shook her head. "You don't understand. What happens if you need one of these on your next film? But you need it mint. Where would you get it?"

He opened his mouth and shut it again.

"Look, you want a Folding Corona #3. I don't have one because I've been looking for one in mint condition."

"Great. Fine. Where am I supposed to find one of those?"

Jenn picked up the hand terminal she'd checked out that morning. "Oh you don't have to worry. I'm happy to find a battered one for you. Easy as pie. They all have damaged enamel."

His shoulders relaxed. "You'd do that?"

"Sure. And after the film, you can store it here with the others."

"That would be… that would be great. If you're sure it's no trouble." He beamed, as the conversation slid back into familiar patterns.

"Not at all. I'm happy to store them." She wouldn't worry about what happened to a machine that was already damaged. Keeping it working as they were filming would be good practice. Jenn looked at the shelves of gleaming typewriters and aligned the Oliver's carriage as a new thought occurred to her.

If she were going to store these for use in films, she might need duplicates. 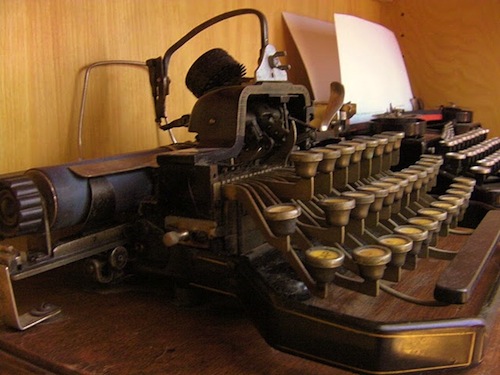 This is the first story in the typewriter triptych. Next:"Playing Against Type"