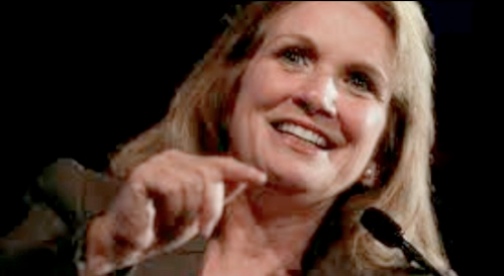 Elizabeth Edwards walked that fine feminist line between being a generous, caring, supportive individual and, at the same time, not taking s – – t from anyone. She had a secret weapon–better yet, a suit of armor. I met her at a book-signing of Saving Graces, which came out in 2006 when I was researching my book. Her subtitle–Finding Solace and Strength from Friends and Strangers–says it all. This was a woman who cried with a stranger she met in a ladies' room, who appreciated the checkout guy and the mailman, who shared her grief with strangers on the Internet. In short, she appreciated, depended upon, and sought out the empathy of others. Even more important, she knew how vital it was to return the favor. Put another way, she shared of herself. The September evening I met her, I had arranged a brief hello with her publicist, explaining that I wanted to interview her because, whether she had used the term or not, her book was mostly about consequential strangers. I was first to approach the podium after her talk.

I stood there at first as a journalist and had planned to tell her a little about my project. But as I handed her a book to sign, I blurted out that my family had just suffered a terrible tragedy. My great nephew, my sister's first grandson, had drowned in her pool. At 14, he was already an amazing and versatile athlete, so no one realized he was in trouble. (Later, we would learn he had a heart condition and that no one could have saved him anyway.) I told her I wanted to give her book to his parents. "So could you please inscribe it to Heidi and Louis?"

"Oh, dear, I'm so sorry. When did this happen?" she asked, acting as if no one else was in the room. It wasn't fake empathy. In that moment, I could feel–and her eyes confirmed–that she truly cared and felt my pain.

"Two weeks ago," I replied as giant tears began to (unexpectedly) roll down my face. I immediately apologized, embarrassed.

She took my hand in hers and said, "Of course  you're crying. Never apologize for that. It's going to take time."

In that brief encounter, Elizabeth and I had a moment that mattered. As it happpened, we never reconnected, but  I wrote about her in the book, piecing together her talks, interviews, and what she revealed about her own life in Saving Graces. She was an example of someone who knew the value of connection, who sought out others, and who handled her life with grace despite the burdens she bore. It is said that it's not what happens to us in life that matters as much as how we handle it. Science confirms this:

Psychologist Peggy Thoits, who has analyzed how people cope with negative events over the long term, grants that factors such as environment, socioeconomic status, gender, race, and the composition of our convoys can limit or enhance our options. However, people who are higher in "personal agency"—the ability to make choices, take action, and set a new course in the face of problems—often manage their circumstances in ways that improve their situation. Such individuals usually have better “personal coping resources,” among them, high self-esteem, optimism, and a sense of “mastery” which allow them to believe they can handle the situation. They also experience fewer symptoms of depression or anxiety. Coincidentally, many of the same strengths are found in people who are “sociable”—agreeable and able to seek out others—which is also associated with better physical health.

I watched Elizabeth Edwards, as most women did, because she suffered–and overcame–the "negative events" we fear the most:  the death of a child, the news that you have cancer, the news that the cancer is back, the betrayal of a husband. She was always herself–never a caricature–and always in the moment. She knew that one cannot make the journey without help.