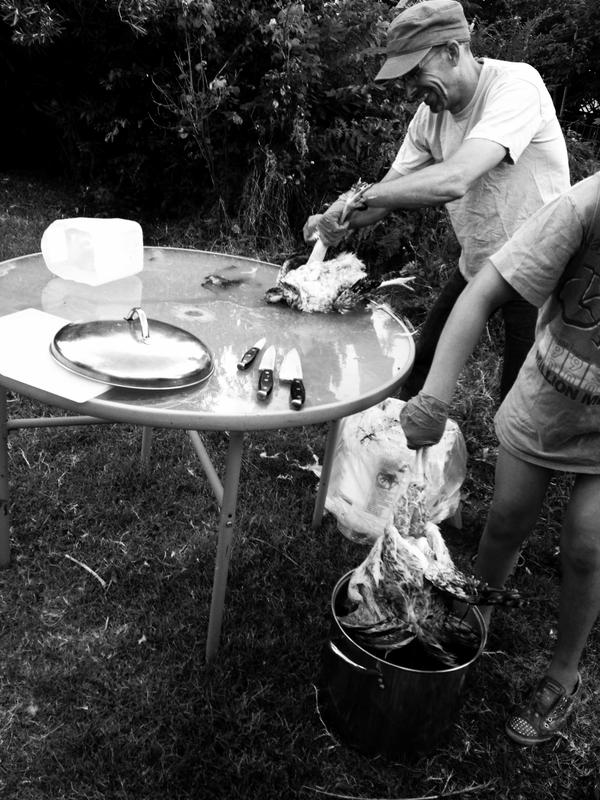 Last night, I lovingly held a rooster, thanked him for his short stay, and efficiently made the cut that ended his life. I’ve never done that. I’ve never killed an animal.

We have made some good friends in this small town. A lot of people, it turns out, are living lifestyles similar to ours: keeping chickens, growing vegetables, and teaching their children some skills of self-sufficiency. We are keeping closer track of the path of the sun, and doing the things that need to be done each season. There is a lot more attention paid to wild foraging, making do with less, getting from point A to point B on your own power, and being good stewards of the land.

A lot of people own chickens now. It’s part of the New Urban zeitgeist. Everyone raves about having access to fresh eggs, the coops are another DIY carpentry opportunity, and we get to give the hens quirky, twee names. Our six girls–Mary, Rhoda, Phyllis, Chamomile, Rocket, and Hilda–live happily in a semi-free-range area of the backyard, cordoned off, fed abundantly on a diet of organic produce, bugs, and high-quality feed. We bring them into the house for short visits. We treat them as pets. A couple of them we raised from chick stage ourselves, using a warming light and a cage we kept in the dining room.

We sometimes speak lightly, cavalierly almost, about what we would do if one of them got hurt or even stopped laying eggs regularly. Would we slaughter her? Eat her? Or bury her, maybe with a tearful family rendition of “Blackbird” after a homegrown eulogy? Stick a popsicle stick in the mound of earth with a “RIP Hilda” written on it in shaky handwriting? Molly is not yet in school, and she is definitely our de facto chicken whisperer. They come to her, she carries them around with confidence, she kisses them without fear or hesitation. Yet still, if you ask her, she’ll tell you she would love to eat one of them. They are special to her. She also suspects they would be delicious.

Our friends went another route with their backyard poultry-keeping, and bought an assorted lot of mixed-breed chicken eggs, fully anticipating that about half of them would be roosters. Once the males betray their sex with an adolescent attempt at a morning warble, Chris takes notice. He usually dispatches the newly outed rooster within a few days. He’s got a system down, and after a few casual offers, I finally agreed to witness it, or even be part of it. 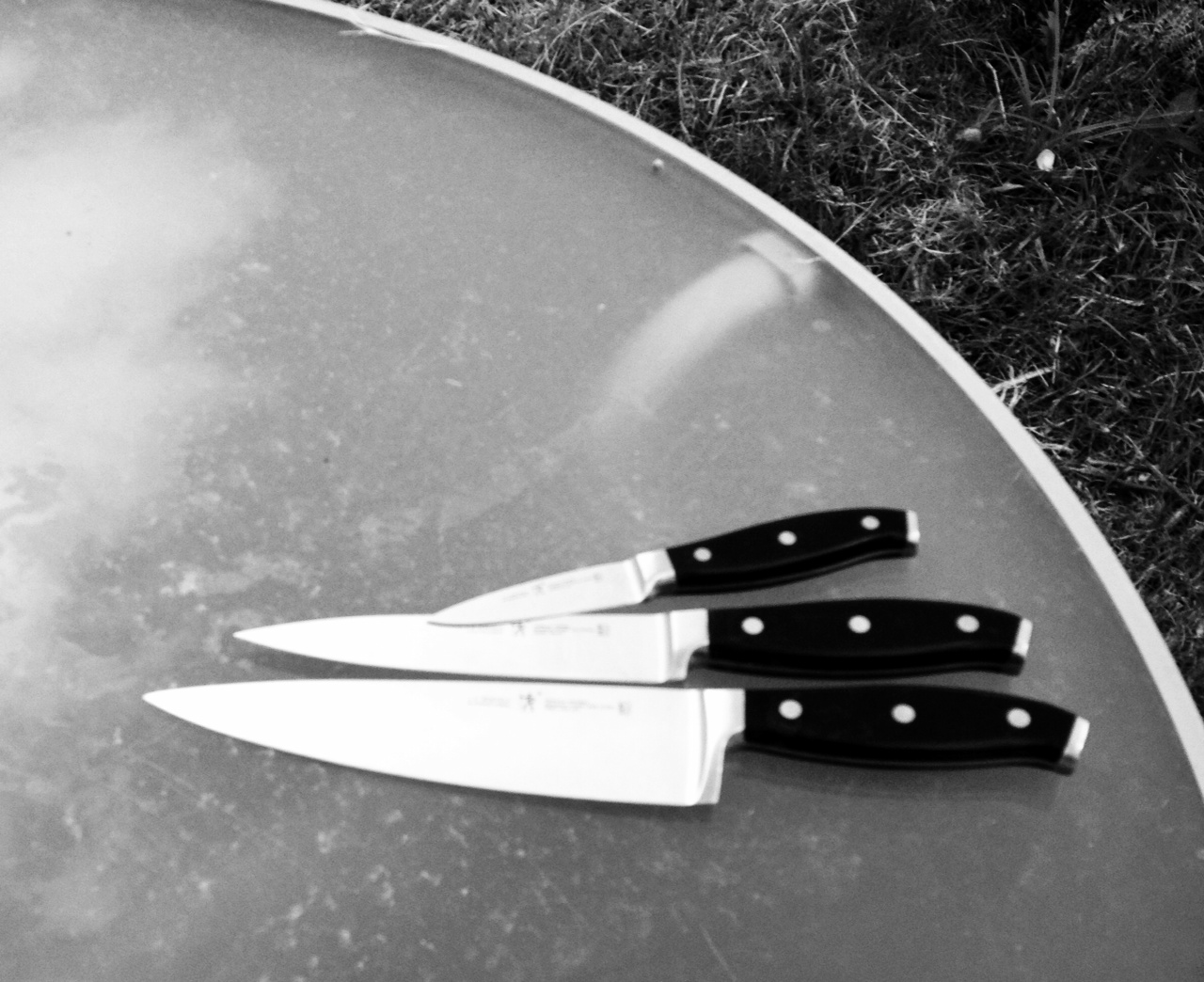 I was a vegan for some years, a vegetarian for many. In the last few years I’ve wrestled with my feelings about all of it. I like to be closer to my food sources. I’m a crappy gardener, but I’m getting better. We grow some of our food, and some of it voluntarily shows up on fruit trees in the neighborhood. Getting all the eggs we need from hens we lovingly care for is deeply gratifying. And I finally started reconciling myself to the fact that I was more comfortable with eating a humanely raised, humanely slaughtered animal than a highly-processed, soy-based meat substitute. My kids love eating meat. I feel better–stronger, more grounded, less crazy–when I eat it. But I am trying to do it in a way that I can reconcile with my understanding of the world and my place in it.

Chris and his wife Julie were fully prepared for this stage in their experience as gentlemen farmers. They moved to California from Wyoming, after all. Neither of them is too precious for the messier tasks of life. They even (gently, lovingly . . . but firmly) require their children to be part of the culling of the roosters. To them it is part of taking responsibility for the life that is lost when we consume animals for food. 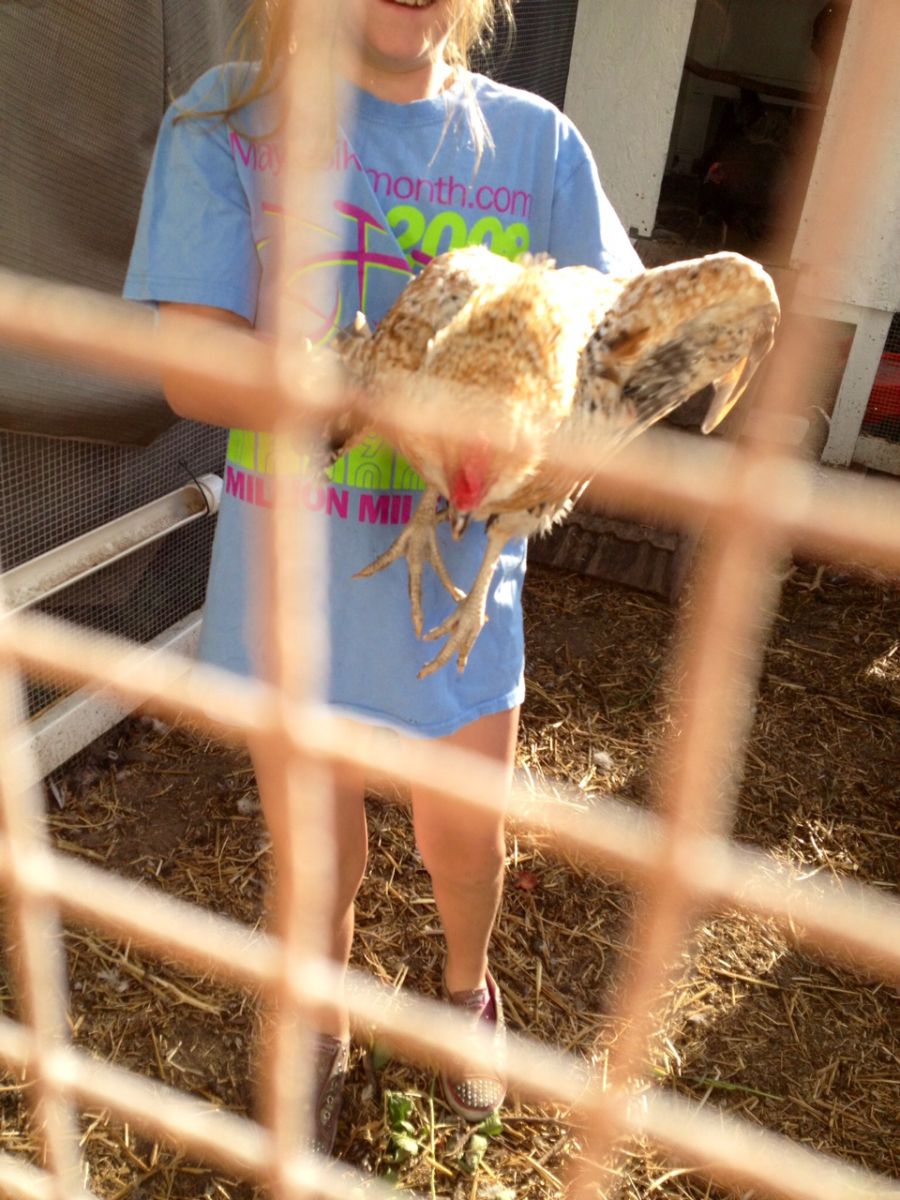 So yesterday, I rode my bike over to their house before sunset. Ten-year old P. greeted me and expressed her grumpiness at the task ahead. I knew from talking to her parents that this was something she’d wrestled with. She’s an avowed omnivore, but she has named these chickens and she’s working on the internal emotional conflict this creates for her. Chris called her on it, parenting her in a way that may seem unsympathetic to those who aren’t privy to his tenderness. Tonight, she was joining him in this task, but I could sense her seriousness and the thread of her grief. I asked her if she was ready for this, and if she was okay with it. She has freckles and blue eyes, you could just die. She looked at me with a straight-across smile and said yes, I’m okay.

There were three knives on the small table in the backyard. P. went to go capture one of the roosters, in a deluxe coop-and-run near a thicket of wild roses. She was giggling while trying to catch one, and her playfulness bubbled up and through the somberness of our evening’s task. She cradled the bird to her chest and brought him back where Chris was preparing the scalding water bath, the bucket, the plastic milk jug cut down for purposes of isolating the neck and head while securing the body.

I asked Chris, what is the next step? He said we give the rooster a last gallop around the yard, just a little taste of freedom. We then hold it and provide whatever comfort we can, trying not to add to its stress unnecessarily. We thank it for the time it spent with us.  And then, when the head is steadied on the other side of the cone, we make a strong swift cut on one side, and then the other. And then we hold its body still while the blood drains into the pail. 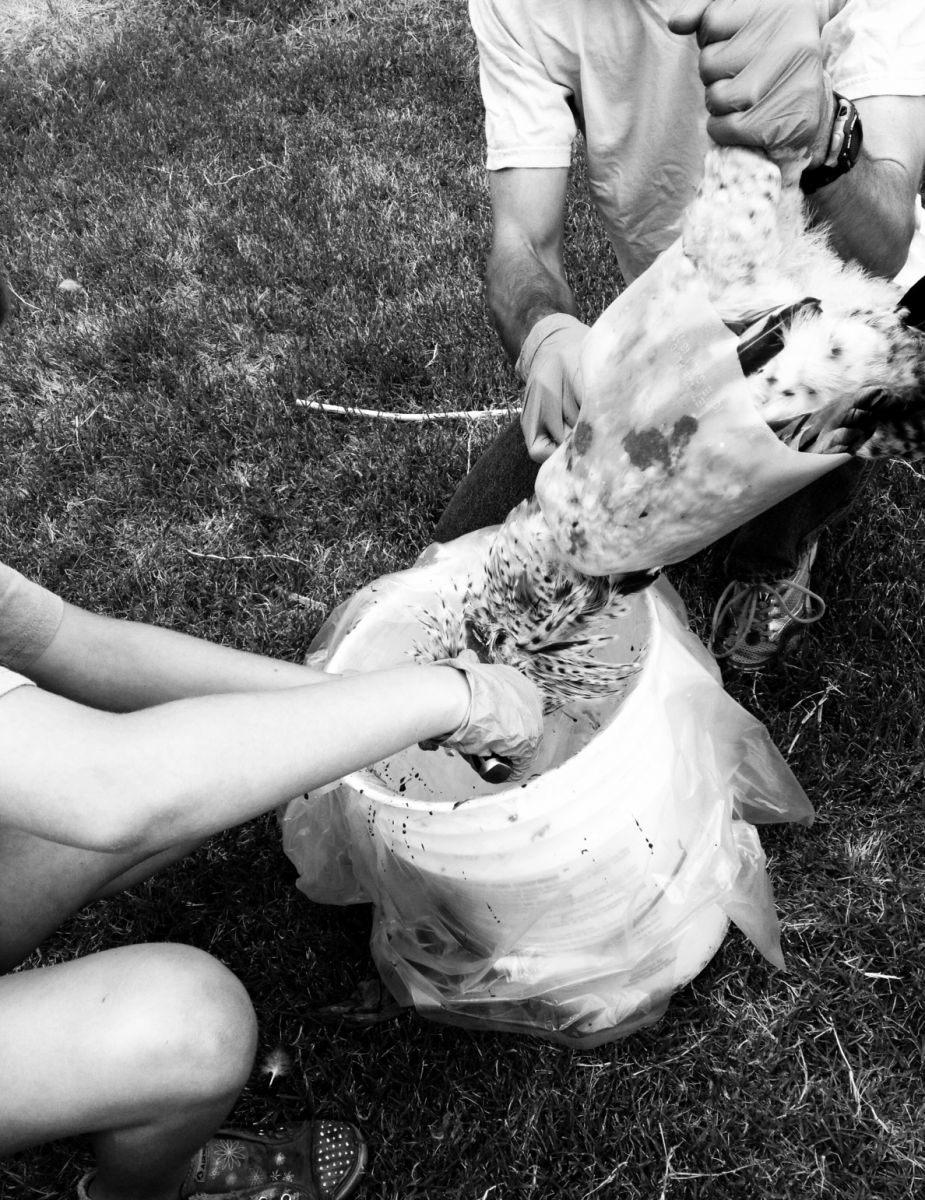 P. had her gloves on. She had volunteered to do the hardest part–the taking of the rooster’s life–and she was wielding the knife calmly and expertly. Chris and Julie had taught her well. Chris referred to her formally and with respect. P. felt for the jaw bone, and moved the surprisingly-effective armor of feathers aside. She put the sharpened blade to the chicken’s neck but something stopped her. “I can’t . . . I can’t get it, I don’t think. I don’t . . . ”

Chris stepped in and said in a low and steady voice, “Here, hand it to me.” He made murmurs of comfort–for the rooster, for his daughter–and without delay he made the small cuts. Swiftly and deeply.

I said, “oh.” And we were quiet, and we bore solemn witness to the death throes. I held the rooster’s legs tightly together and steadied its back with my hand. It wasn’t as bloody as I thought it would be. P. was okay. She looked up at me and we kept eye contact for a moment, before she looked back down at the rooster.

The next step was to remove the head cleanly, and then dip the bird into the scalding water. This helps with the bacteria, and prepares it for plucking. We worked quickly, side by side, taking off the feathers as thoroughly as we could. I was good at this, it turns out. It didn’t bother me so much. We talked–about chickens, about their feathers and the functions of them, about the anatomy we were working with. Both male and female chickens have an oil gland near their vent, which they use in preening to promote water-resistance. That needs to be removed, and the feet as well. Chris and Julie make stock from the feet–it gives the broth body and substance. We cleaned everything thoroughly. We were fast and careful. The smells were strangely familiar, and only mildly unpleasant. The scientist in me found it all interesting: the big bulging gullet at the top, the feeling of the torso and the joints. 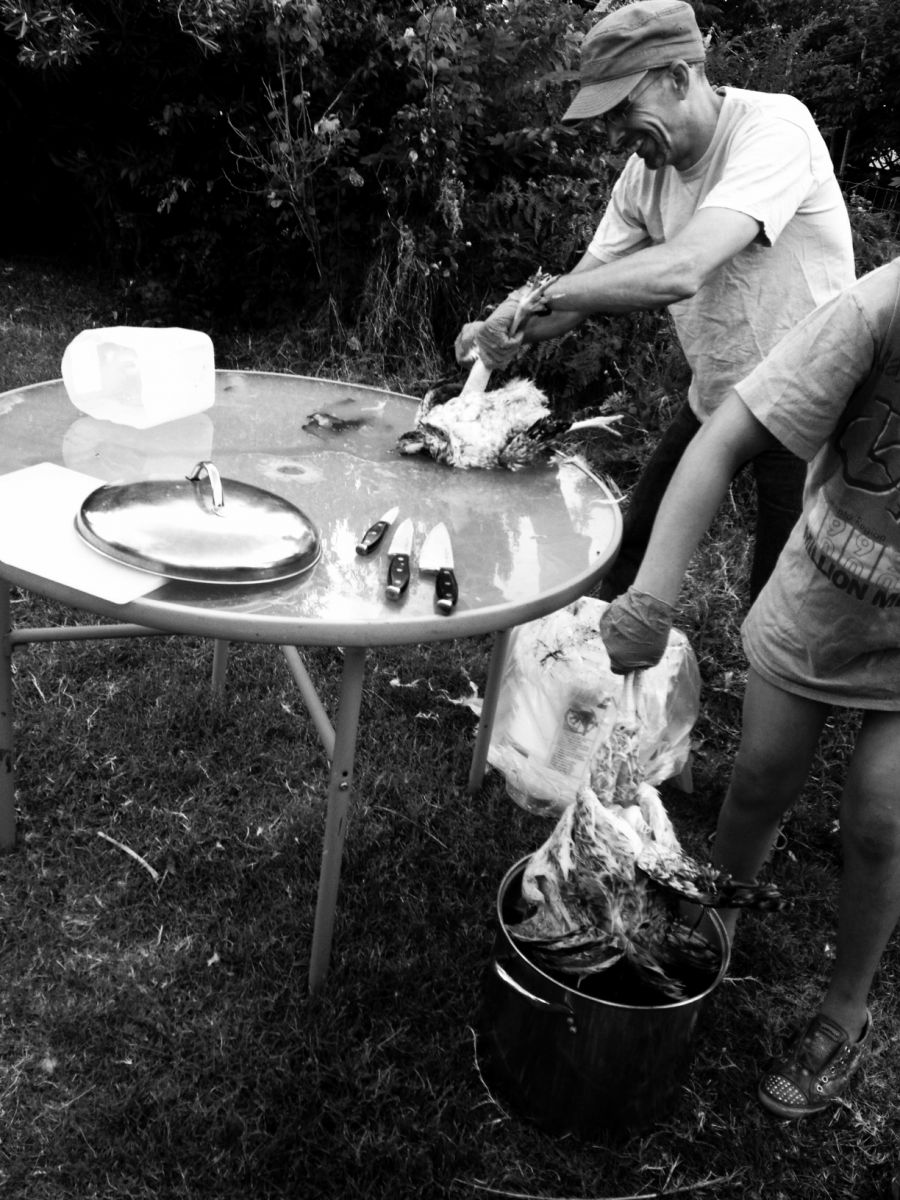 While we were doing this, a neighbor came home and shouted hello, made a quick bark of nervous laughter and a hasty exit.

Then it was time for the next rooster. P. went off to the side of the house to catch him. He was louder than the first one, and I hoped deeply that it wasn’t because he was afraid. We gave him his yard time, and we talked and laughed lightly, admiring his spirit. I changed to a new set of gloves, and P. handed me her knife and said, “do you want to do it?”

Want is a strange word, I said. But it seemed right and okay, and I took the knife from her. When he was readied and in place, I looked at his rooster eyes and I said to Chris, “what hippies we are, caring so much!” And Chris laughed and said, “I think we’re hereby voted off the island.”

And I would like to say it was hard, but it was not. I knew this had been a righteous life for this rooster, and that all of him would be used, and that his death would come swiftly and mercifully. I made one cut, and then another.