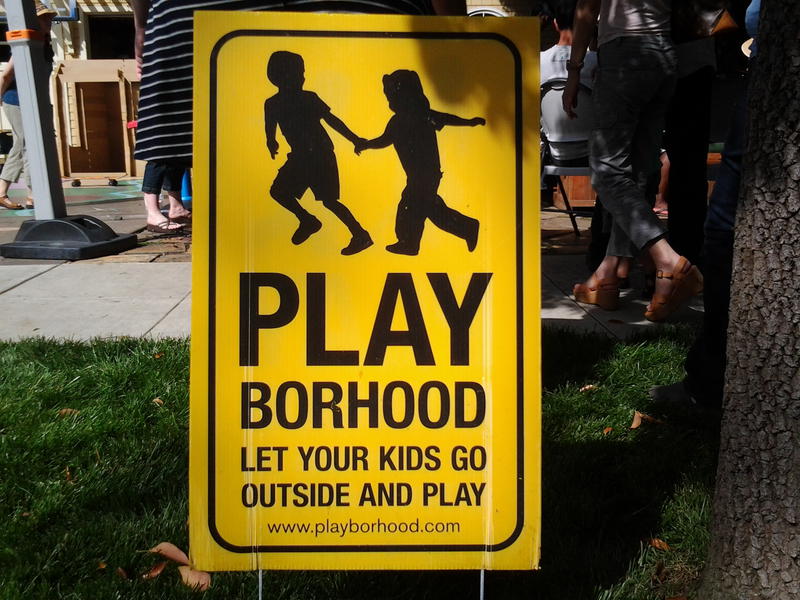 The best thing about my childhood was the time I spent with friends outdoors creating our own fun…without parents around!

We waged huge mud ball wars in Summer. We played kick the can at dusk. There was the Big Wheel distance jumping contest that reduced our rides to plastic pulp. The three day Monopoloy tournament with games so long that we had to make up additional money. The fleet of model ships we destroyed in the creek during a mock naval battle. The incredibly realistic miniature village we created on said creek’s bank with army men, pebbles, slate, and mud. The cookie battle we waged in the parking lot of a bakery after finding a motherload of stale cookies in the dumpster out back. The epic pick up tackle football games we played inspired by NFL films. Dumpster diving for uncancelled stamps at the mail order house. The many fires we started. And the things we broke, collected, and stole.

We created and destroyed with abandon. We skinned knees, burned things, grew gardens, bloodied each others noses, built forts, collected recycled cans and made the newspaper, and created our own memories and myths with a rambunctious group of kids my brothers and I found ourselves among during the 70s while living in suburban Northern Virginia.

We owned the neighborhood in one way. We knew every nook and cranny of it, and also what surrounded it. In another way we didn’t. There were the older kids, bullies. They did things like make us box each other bare fisted until we bled. But they also beat the crap out of anyone outside the neighborhood that messed with us.

This was no American Academy of Pediatrics approved childhood, but I loved most this aspect of it. My life outdoors with friends was filled with true adventure. There was real discovery and danger, and that was exactly why I relished it. We had our own, separate civilization with factions, heroes, and history. I would hardly be the same person without the freedom I had to explore, screw up, imagine, and play.

I may have learned my most important lessons in that precious crucible of boyhood. I learned how to hold my own among rough and tumble peers. I learned to enlist others in creating our own reality. And I taught myself the value of rules by breaking them.

And for all the depressing turmoil at home and numbing discipline at school, it was perhaps all redeemed by the freedom I had to play in the streets and woods. These experiences are the very model of what being truly alive feels like for me, even today as an adult.

Has the play commons been enclosed? Yes, if the stats are any indication. The erosion of communal life and public space is being felt acutely by kids. They’re now plagued with obesity and depression. From the new book, Playborhoods: Turn Your Neighborhood into a Place for Play:

Because children are having a lot less fun and are dealing with heightened pressure and fears from parents, far more of them are experiencing serious emotional problems. The first sign, anxiety, appears, on average, at the tender age of six. Behavior disorders start, on average, at 11, and mood disorders (primarily depression) start at 13. An incredible 22.2 percent of teens 13 to 18 suffer from mental disorders grave enough to result in “severe impairment and / or distress”.

This controlled and isolated childhood is one I’d hate as a kid. And one I don’t want for our two year old son Jake. Plus, I don’t want to be driving him to endless scheduled activities spread across town. That’s no replacement for the village it takes to raise a child.

This situation is exactly what brought Playborhoods author and tech entrepreneur Mike Lanza to first create a playborhood for his kids, then take playborhoods to the rest of the world with a blog and book. When he started a family, he saw what was coming for his kids and said to himself, “I can’t do this.”

Mike then turned his home into a community center for kids and encouraged neighboring parents to do the same. The result is that their home is a magnet for neighborhood kids who are free to play unsupervised in the house or yard.

The Lanza home is quasi-public space for “free play”, which psychologist believe is essential for social, cognitive, and emotional development. Free play is unstructured activity that’s done for the pleasure of it rather than for reward, and it may help kids find fulfilling work based on intrinsic rewards later in life. The playborhood also brought nearby families together.

I met with Mike at a book event he held on Sunday April 29th at the playborhood he created in Menlo Park, California. Below is an interview where he explains playborhoods and how you can create one yourself.

Our visit to his playborhood left me full of wonder. Mike has radically redefined the suburban home from a display of conspicious consumption to a community center for kids. He’s realized his vision to a level of detail that’s awe inspiring. His playborhood demonstrates that almost every element of the home is an opportunity to educate and create a fun place for kids to play, even the driveway on which a street map of the neighborhood is painted, perfect for driving matchbox cars on.

The below slides shows the lengths he’s gone. I particularly like his use of maps around the house. There’s huge maps of the neighborhood, city, country, world, and even the solar system. The smaller scale maps have pictures of friends and family pinned where they live. The maps foster a sense of place and a multi-scale consciousness, which will be important for future adults in a global, networked world.

Mike’s Menlo Park playborhood reflects the affluence of the area, but playborhoods are popping up in all kinds of neighborhoods. His book profiles playborhoods in tough South Bronx, the N Street cohousing community in Davis, California, a middle-class Portland neighborhood, and the new urbanism community of Pike Road, Alabama.

Playborhoods may not offer the wild boyhood I had, but perhaps it’s a wholesome midpoint between total control and complete freedom. Call me a hypocrite, but I’m uncomfortable with the idea of my son Jake burning, stealing, fighting, and trespassing like we did. Maybe playborhoods can give him the freedom create his own fun without the danger? Or are playborhoods just a smarter form of parental control? Whatever the case, I’ll take playborhoods over an enclosed childhood any day. [slideshow]