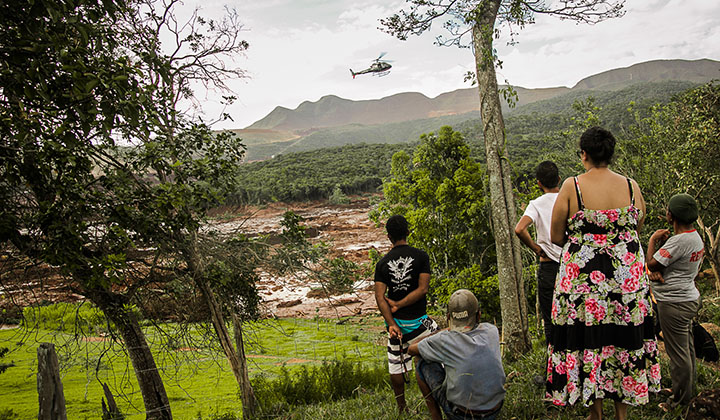 In the small mining town of Brumadinho in southeastern Brazil, the Córrego do Feijão tailings dam owned by Vale, the largest iron ore producer in the world, collapsed on January 25, 2019. It unleashed a tsunami of toxic mud packed with iron ore rejects, killing at least 270 people, and causing widespread environmental damage. The mud covered 290 hectares or about 300 football fields.

But amid one of Brazil’s most fatal environmental disasters, community-led resilience efforts and organization stepped in to provide vital relief and support for the remaining residents. By pooling their energy and time, the people of Brumadinho have been able to organize for immediate assistance, fight for their rights, and pave the way towards restoring their collective memory.

In Córrego do Feijão, the Brumadinho district where the mine is located, 20-year-old law student Jeferson Custódio Santos Vieira was at home making lunch when the dam collapsed. His younger brothers were outside playing football. When he heard a loud noise, Custódio stepped outside and saw neighbors running. A cloud of smoke emerged in the distance. “There was a sea of mud coming down, destroying everything in its path,” he recalls.

After ushering his brothers indoors, Custódio ran down the hill in the direction of the dam. People warned him not to go because it was dangerous. But at the bottom of the mountain was an inn where his grandmother worked as a cook, and his aunt, a cleaner. He wanted to see if they were OK. But as soon as he had an unobstructed view, he froze. “It was already completely engulfed,” he remembers sadly.

For the following week, all 200 families in his village gathered daily in their adobe community center. For the first two days, there was no electricity, no water, and no internet access. All connecting roads were destroyed. “We were isolated, and everyone had family members missing,” says Custódio.

From these daily gatherings, a people’s commission – Comissão de Atingidos do Córrego do Feijão – formed of those willing to get involved. In the beginning, the group centralized information coming in from the rescue teams about victims and survivors of the tragedy. As donations started pouring in through makeshift paths that bypassed the mud, their community collectively received and fairly divided food, water, and other basic supplements. Twelve people currently on the commission represent about 600 people. “There aren’t any leaders here,” Custódio says. “Everyone here needs help, including those helping others the most.”

Five months later, Custódio’s village reports 27 confirmed deaths. Many residents still report chronic headaches and rashes. The reasons are uncertain. Depression and anxiety are rampant. Chickens continue to drop dead – no one knows why, but people suspect contaminated water. Villagers who made extra money by selling eggs and herbs are going without. All the fishermen in the greater region are out of work because the river is now contaminated by heavy metals. Many fish died and the surviving fish are unsafe to eat.

The Brumadinho disaster comes just a few years after another traumatic dam collapse in the nearby city of Mariana. Custódio learned lessons from Mariana’s bad experiences and was keen not to share the same fate. “We needed to ensure our collective rights to help ourselves and each other,” says Custódio. “In less than a month, we got authorities to reopen roads and re-establish electricity and water here – things that didn’t happen in Mariana.”

As a group, they are able to act as spokespeople for those most affected and collectively pressure the mining company and authorities for their rights. Several months down the line, with immediate relief out of the way, they continue to distribute mineral water as well as slowly rebuild community structures.

On the other side of town, 32-year-old homemaker Flávia Coelho dedicates all her free time to creating a memorial. Her father, Olavo Henrique Coelho, worked at the mine for almost 40 years. After identifying safety issues with the dam seven months before its rupture, he urgently reported his concerns to Vale but was ignored. He was one of the victims who perished in the collapse. His daughter’s mission is to make sure that this disaster is never forgotten – or repeated.

At the entrance of Brumadinho, large white concrete letters spell out the town’s name. Photographs and flowers now cover the landmark. A banner with the names of all those still missing is hoisted high, with one side attached to a wooden pole and the other to a street sign. This area is where family members come together on the 25th of every month to protest and honor the lives lost. Shouts for justice echo throughout the main avenue.

At a spacious building ceded by the local Catholic church, the construction of a memorial for the victims is already underway. “There is space for everyone who died,” says Coelho, who describes an individual corner with photographs, personal objects, and stories told by family and friends.

“I help unearth the life stories of every single victim,” says Coelho, a job she carries out with 30 other volunteers without any political support. “The families are all united. We want the world to hear our story.”

Unfortunately, Brumadinho may not be the last mining disaster in Brazil. Several tailings dams in other cities are under red alert, at risk of imminent collapse. In Barão de Cocais, a mining town only two hours away from Brumadinho, residents are paralyzed with fear and very worried.

Last month, a fragment of the dam fell, and the barrier continues to slide by over 40 centimeters every day.

Late at night, 31-year-old resident Maxwell de Andrade walks down to the riverbank with a small group. They watch and wait. “We start the vigil at midnight and leave around 5 am,” says de Andrade, who maintained this routine for months. But with work during the day and the winter months approaching, he can no longer sustain the vigils.

His concerns remain. If the nearby dam collapses, will they have enough time to alert their neighbors and escape before a wave of mining tailings mud swallows their homes?

With a group of other concerned citizens, he is fighting for the evacuation of all the families that live near the river. Barão’s residents are also feeling the psychological impact, so Vale is also being pressured to fund and offer mental health services. But so far, no action has been taken.

“There’s nothing we can do except wait for a tragedy to happen,” de Andrade laments. But he and other citizens are doing everything they can to prevent more lives being harmed.