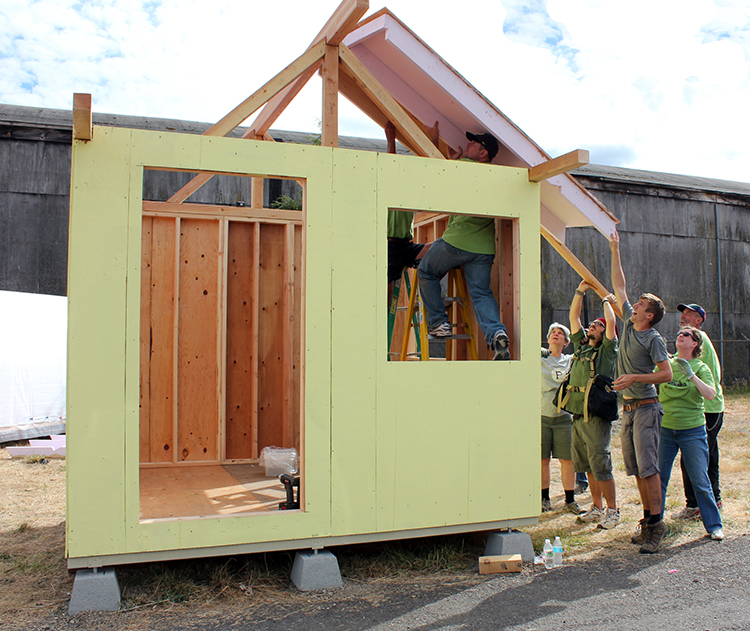 Here's the problem: A range of factors can contribute to people becoming homeless, including economic downturns, rising costs of housing, cuts to Social Security and health care, and personal circumstances like a health crisis and relationship breakdowns. People who find themselves homeless can be vulnerable, especially at night. The city of Eugene, Oregon, has a population of approximately 160,000 with an estimated homeless population of 3,000.

Here's how one organization is working on the problem: Opportunity Village Eugene (OVE) is a "tiny house" community in Eugene, Oregon, that provides secure accommodation for around 35 people who were previously homeless. OVE provides residents with more than just affordable shelter — being part of the village offers the dignity of having a private space and access to a shared laundromat, kitchen, bathroom, and workshop. Residents also receive quarterly bus passes and have access to computers and Wi-Fi to help bridge mobility and digital divides.

The community requires some reciprocity from its members. Residents contribute $30, help with cleaning and maintenance, and participate in managing the community. OVE has a no drug or alcohol use policy, which means that, while the space does create a safe community for residents, it excludes homeless people who are struggling with substance abuse.

There is no limit to how long someone can stay at OVE. However, residents are encouraged to develop their personal plan for moving to more permanent accommodation, finding work, or whatever their path forward entails.

While OVE is not a panacea for homelessness, it is a working model that can be replicated to support people who need housing immediately and give them breathing room to transition into more permanent housing. The willingness of the local authority to support the OVE project has been a key factor in its success, for two reasons in particular: