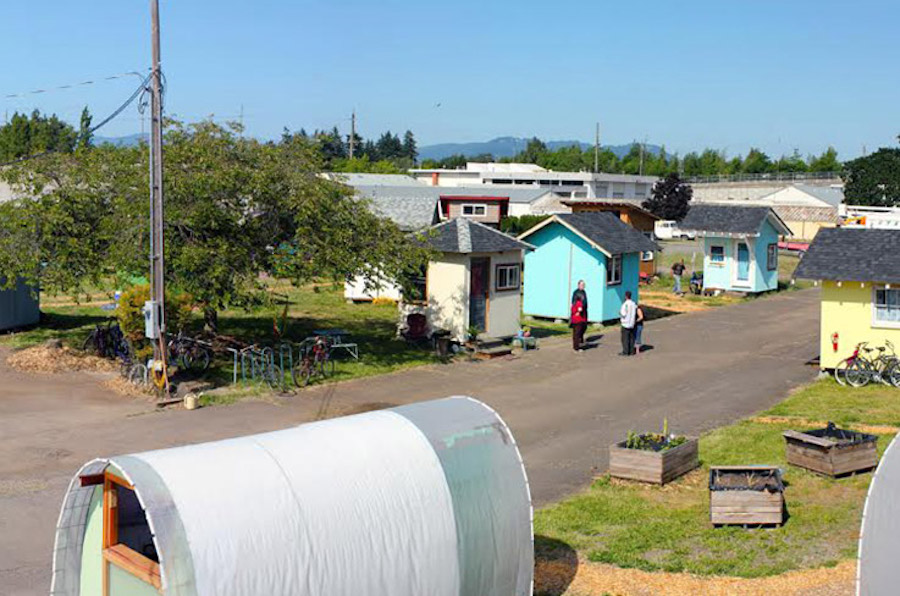 Tiny houses in Eugene, Oregon, provide the formerly homeless with a sense of ownership and community. This article is cross-posted from Future Perfect.

Rhonda Harding was working as a live-in health care provider when she became homeless. Her client passed away, and Harding couldn’t find other housing. “Since I was technically not on his lease, I had nowhere else to go,” she says.

An article in the local newspaper in Eugene, Oregon, about a proposed “transitional micro-housing pilot project” caught Harding’s attention, and she and her longtime partner applied. They became two of the first members of Opportunity Village Eugene (OVE).

A place to be

A nonprofit, self-managed community of low-cost tiny houses for people in need of housing, Opportunity Village has housed 90 people since 2013, with 30 to 35 currently living there. The village has 20 bungalows ranging between 60 and 80 square feet each—which is significantly smaller than the 400-500 square feet that generally defines a tiny house—nine Conestoga wagons, a bathroom, a gatehouse, and a yurt that provides common space for gathering and cooking.

The village offers a sense of ownership combined with community autonomy. Residents pay 30 US dollars per month, attend mandatory weekly meetings, and do ten hours of work a week, including giving tours to visitors, working at the front gate, and cleaning the shared facilities.

OVE was created in response to the large number of homeless people in the Eugene area. Estimates put the current number at nearly 3,000 in a town of 150,000 people. The local Occupy movement brought the seriousness of the issue to light. Following a series of community meetings, Mayor Kitty Piercy created a community task force to develop recommendations. The first of these was simply to give unhoused people a place to be.

The city council identified underused property that could be used for OVE, and the village was built with donated labor and supplies, with church and community groups, individuals, and several local businesses contributing to the creation of the village through work parties, group building days and more. It is funded with donations and grants. The council initially agreed, on a six to two vote, to lease the land for one US dollar per year on a 12 month trial basis. When the lease came up a year later, it was renewed unanimously. 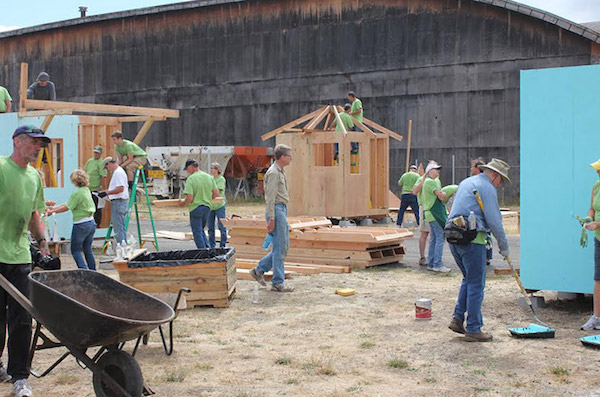 Opportunity Village was built with donated materials and labor.

Dan Bryant, pastor of First Christian Church of Eugene, executive director of Opportunity Village and a leader on homeless issues in the Eugene community, says the project has been an undeniable success. “We’re about to come up for renewal again,” he says. “I expect that it will be approved. I don’t think there’s any question that it’s been a success.”

Because there is no staff at OVE—there is a board that helps with decision making, when necessary—the villagers rely on existing community services for issues such as addiction and mental health. They create and enforce their own community rules and manage their conflicts internally.

On a typical day, some residents leave for work, some go to school, and some do job searches in the computer lab or fill out job applications. Harding feels a sense of connectedness in the community. And when asked where she would be if she weren't at OVE, she says quietly, “Honestly, I’m not sure. I work doing some daycare stuff, but that just barely pays my cellphone bill.” 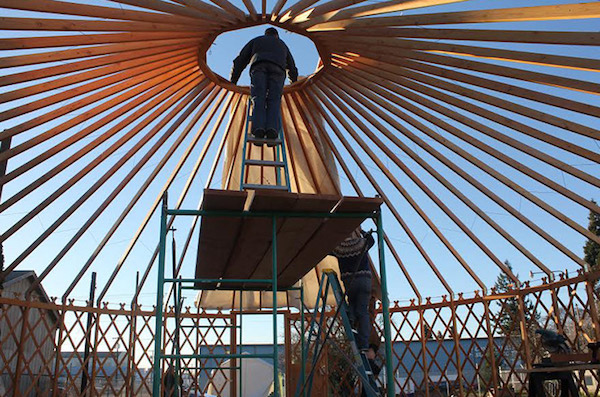 A yurt provides a common space in Opportunity Village.

From transitional to permanent housing solutions

An estimated two-thirds of OVE residents move on to permanent housing. In a city with 3,000 homeless people, however, pastor Bryant says that the city needs not just transitional housing but permanent housing to get people off the streets.

“It’s still a drop in the bucket,” says the native Oregonian and son of a minister “Two-thirds of the people who have moved out have moved out successfully into other housing, but the other third are probably still homeless.”

Building on the success of OVE, the nonprofit re-formed as SquareOne Villages. Bryant and his team, including cofounder Andrew Heben, author of Tent City Urbanism: From Self-Organized Camps to Tiny House Villages, are creating Emerald Village (EV). A tiny house village designed to provide permanent housing, EV will address the lack of permanent housing for small households. Federal dollars tend to prioritize families, so most of the affordable housing that is built consists of multi-bedroom apartments.

“There are just not enough single-bedroom apartments,” says Bryant. “In our community, for instance, the wait time for two-, three-, and four-bedroom households varies from two to three years. The wait time for a single bedroom is over five years. Our housing authority stopped putting people on the waitlist because it was pointless.”

With an estimated completion as early as this fall, EV will provide tiny houses with a kitchen, heating, and a bathroom. The village will be self-sustaining, with residents paying 250 to 350 US dollars in rent. A portion of the rent will be put into a savings account that gives villagers a share of ownership and an asset they can take with them. 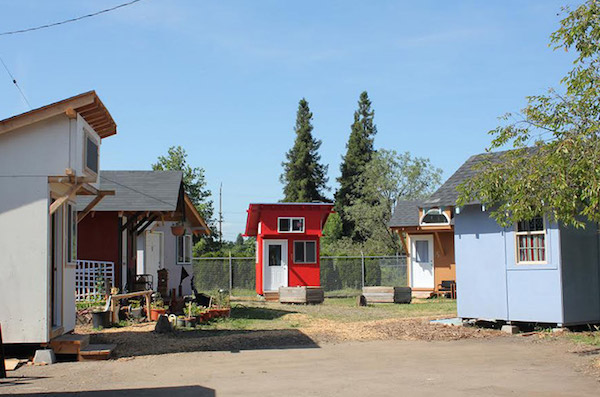 Residents pay 30 US dollars per month to live in Opportunity Village.

One of the biggest challenges SquareOne faced with EV was pushback from neighbors who didn’t want a tiny house village near them. To address concerns, the team, which includes Bryant, Heben, village coordinator Melissa Spider Smith, interns, and a board of directors, spent time talking with, and listening to, the community. In the end, they came to an agreement that a representative from the neighborhood will sit in on the village’s vetting committee, created to ensure that new members of the village are a suitable fit.

“We want to make sure that we have the best people to make this a success,” says Bryant, “and the neighbors want to feel good about who’s moving into the neighborhood.”

Building on the success of OVE and the momentum around EV, SquareOne plans to help other communities replicate the tiny house village model. The group has offered guidance and input on projects around the United States and intends to create a product to help other communities establish a tiny house village for their homeless. SquareOne is seeking a $150,000 grant to help launch this project.

“We’re very hopeful,” says Bryant, “that we’ll have a product that can be easily adopted and used in communities across the country.”

For Bryant, helping people live with dignity is a top priority. He wants to create a model where individuals making $800 per month can afford to live decently and hold their heads up high in their community.

“People look at the unhoused in our communities and think it’s a shameful thing,” he says. “For me, the shameful thing is that we, as a society, have not made it possible for the poorest of the poor to live with any dignity.”