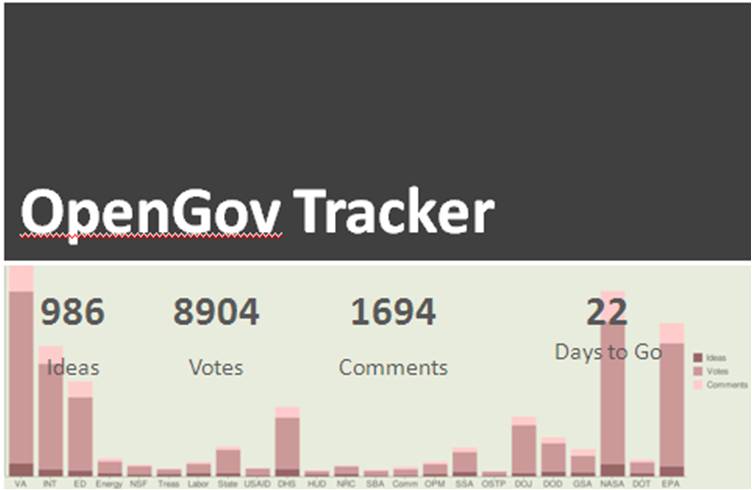 If open government and open data have the capacity to do the most good for the greatest number of people then Open Gov Tracker is the Open Gov movement's heart rate monitor.

Open Gov Tracker displays real-time information on the ideas, votes, and comments that have gone into the federal government's various open data project. It displays the input you the citizen and we the people have given to the various branches of government.  From here, one can access federal government branches and their universal platforms for sharing government data. This means that not only can you access the data, but  now you can see which branch is getting the most input.

Dividing the input into ideas, votes, and comments has an added benefit: we get to see who really is generating good ideas, and what others really think about those ideas. The votes, like most social websites, allow a basic ranking of the ideas input by others. The comments section allows one to track the debate in real time. Additionally, the design (by IdeaScale) enables you to see if there is a lack of ideas as compared to comments or votes (highly informative).

So let's choose a branch as an example. I am a scientist, so naturally the NSF is a branch which concerns me. If I scroll down the list to the NSF, I can see that so far (10:34 PM EST 2/23/2010) 13 authors have contributed 19 ideas, generated 65 votes, resulting in 14 comments. At the far right are two links, one to a twitter account (which I am now following) and one to the site's open portal.

From the open portal, I can choose to sign in with my google account (convenient) and begin participating (this does not show up in buzz, but that would be a cool feature). Now, I can browse ideas, vote on them, and provide comments as I see fit. So I long in, propose an idea, participate in the discussion, and vote on other ideas. Real simple, it tool me 5 minutes to do all that.

The idea that the federal government is actually paying attention speaks to the massive changes the internet is affecting on societies. With any luck, these projects may help to truly ensure that gross inefficiencies are dealt with. If it makes it to state goverment level, let me know – I don't ever want to stand in a 2 hour DMV line again.