#Occupy The Cloud: What Occupy Wall Street Can Take from Gov 2.0 - Shareable
Skip to content 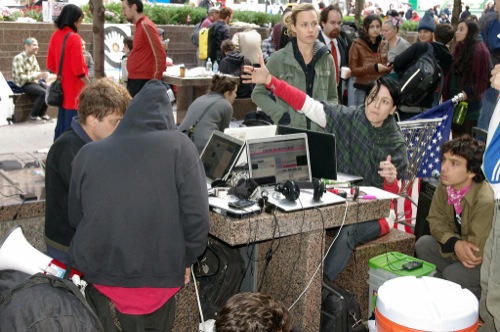 "They say we don’t know what we want, but here we are making our decisions without bankers or politicians intervening in our lives. This is what we want." – Anonymous Occupy pamphlet

Spotting tents along the river, I drove a big circle back up Ocean St., onto Water St. and pulled the car over in the pouring rain. I walked down a bit into San Lorenzo park with my camera, where row upon row of tents ran along the bank behind the county buildings. “Occupy the earth,” offered a camper who was taking shelter. I took a few shots and grabbed an “Occupy!” pamphlet. From the shelter of the car, I created a Foursquare spot for Occupy Santa Cruz and checked in.

I support the occupy movement and its fight against inequality and financial and political corruption. And like another movement I’ve supported for the past three years, I see great promise in the ability of lightweight social technologies to advance its message.

“Gov 2.0” is the idea that we can do government better through crowdsourcing, through open data standards and through the connectivity of social media. Tech guru Tim O’Reilly calls it “government as a platform". As Facebook and Twitter have allowed thousands of other companies to flourish by building upon their core services, government agencies can provide new services simply by opening important data they collect and curate. That notion has inspired real-time transit applications, SMS services that warn of dangerous health conditions at restaurants, garbage pick-up schedules on mobile phones, and even an app that alerts CPR-trained bystanders if someone near them is in cardiac arrest. 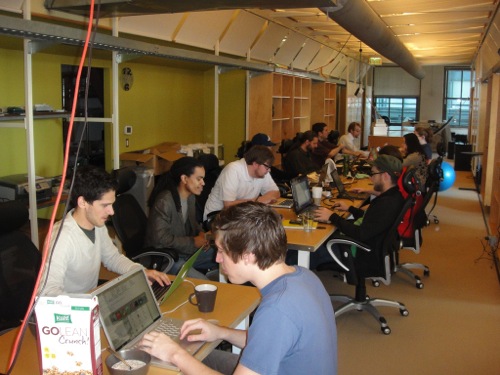 Government 2.0 is not about inequality. It’s about inefficiency. We’ve learned that developers can generally get things done at a small fraction of the cost in time and money as the unwieldy modern bureaucracy. Our political structures are broken, with Congress less popular than the King of England at the dawn of the American Revolution. Government contracting is broken. A friend recently asked me to guess how much the procurement cost for $100,000 of his company’s software services. I was overly pessimistic. The process cost $250,000.

Occupy and its broad public support is similarly born of frustration. Its tactics, however, are much more aggressive and direct. Gov 2.0 has open ideation, Occupy has general assemblies; Gov 2.0 has weekend “camps”, occupiers pitch tents; Gov 2.0 bureaucrats risk jobs for innovation’s sake, occupiers take batons to the ribs and pepper spray to their faces.

Despite these significant differences, though, the more mature Gov 2.0 movement and its progress holds a few lessons for Occupy. 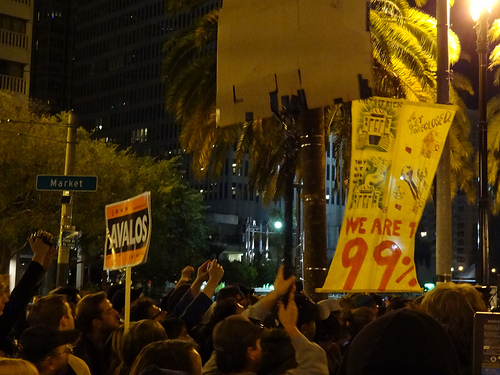 Persistence. In 2009, social media junkies wanted everything now. Government, where contracting disputes regularly drag on for years, was radically foreign to techies used to full corporate life cycles less protracted. GovLoop, a community for government innovators, was just getting started with several hundred members. Three years later, the organizers, advocates and entrepreneurs who persisted have created measurable change, passing open data laws in municipalities around the world and birthing thousands of applications from governments’ big data. These include the peer-to-peer climate protection challenges created during British Columbia’s “Apps 4 Climate Action,” and the new open innovation platform at Challenge.gov, where individual and institutional entrepreneurs use federal data to create new solutions for public health and more. GovLoop just hit 50,000 members. To succeed in rolling back societal inequality, crony capitalism and the invasive police state, Occupy must persist. That means organizing, it means pacing and it means evolution. It will take years.

Platform. O’Reilly’s mantra for government and its genesis in the software world works for Occupy. Protest memes and tactics are infinitely extendable in a networked world. If a new slogan or method of action falls flat, it is quickly abandoned; if it is worthwhile, it spreads easily and quickly through email and social networks and can be adapted upon for new uses. The “occupy” terminology is itself an example of the extendable nature of a platform movement, with spinoffs like “Occupy the Board Room” and its 7,500 personal messages to bank executives, and “Occupy Writers” with endorsements and new original works by supportive authors. See also Nick Judd’s reporting on use of the mic check in various settings from the street to the City Council, and Alex Madrigal’s exposition of Occupy as an application programming interface. 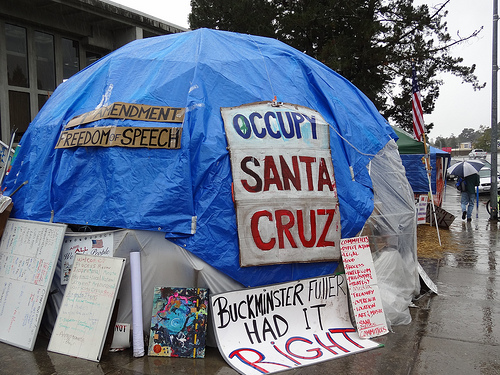 Cloud. Gov 2.0’s embrace of software-as-a-service and on-demand computing has meant more, better, and faster civic technology. Whether it’s Socrata’s open data applications, Utah’s data center consolidation (which reduced 35 data center sites into two for an annual $4 million savings) or SeeClickFix’s mobile non-emergency-service reporting mobile app, scalable architecture and outsourced management has meant more flexibility and increased focus on information and services. The cloud paradigm means that computing resources can easily scale up and down to meet demand, and server maintenance and upgrades are handled by a dedicated team at a remote data center while technologists focus on applications instead of the infrastructure.

In Oakland, an Occupy organizer told me he didn’t want to use SaaS because it’s too easy for a a cloud provider to shut down activists, like Amazon did by removing WikiLeaks as a customer. Such concerns are valid and wise. However, Occupy’s own on-site hardware has proved even more vulnerable, with police confiscating and destroying computer hardware. Internet-based operations with less centralized reliance on infrastructure providers have proven very hard to shut down.

“Anonymous,” the autonomous leaderless and leaderfull collective of on- and off-line pranksters has proved incredibly powerful, at the cost of few arrests. Consumer technologies are Occupy’s friend when many police officers don’t even have their own email addresses. Since mobile video and cell phones are such essential tools for the movement, it’s a mistake to let open source dogma dictate use of clunky technologies (see my post, “The Great Threat of ‘Free’ to OpenGov”). 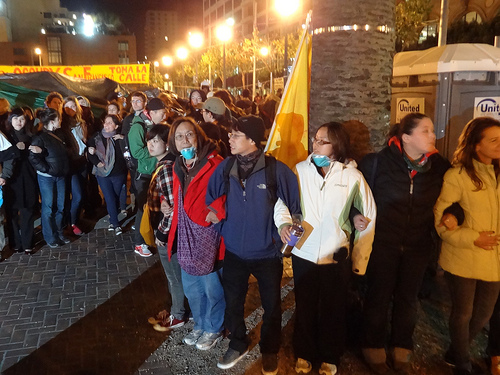 It’s all too easy to fall into the trap where technologies that don’t cost money are seen as “free”, but these tools can create barriers for non-technical organizers, such as needing tech support to accomplish key tasks or spending extra time on simple ones. Occupy has grown into a legitimate social movement and should be using cutting-edge cloud technologies to organize, communicate and reduce its vulnerability to raids and property seizure. Since New York Mayor Michael Bloomberg succeeded in clearing Zuccotti Park , organizing effectively online is even more important.

Media. Gov 2.0 and its elevation of social media as an accepted channel for official communications have given Occupy and its tech-savvy supporters a valuable weapon. Three years ago, we couldn’t find 200 government officials on Twitter. Today, thanks in large part to hundreds of communicators within government and scores of outside companies, social media use is ubiquitous among officials and widely followed by the mainstream media. This phenomenon helped facilitate instances like Andy Carvin’s coverages the Arab Spring via Twitter and late-night newsdesks adopting livestreamed social media eyewitnesses as sources. Occupy didn’t need to be taught to use livesteaming and Twitter hashtags, they were already there.

There is space for Occupy to grow in learning how to use social media to advance an agenda without losing the individuals and stories that people relate to and that will bring in new supporters. The Gov 1.0 approach to social media is to slap up an official seal and start broadcasting carefully vetted statements and links to press releases. Gov 2.0 is real people expressing their responsibilities with a human approach and two-way interaction. It is official messages signed with a first name and Twitter bios denoting who is responsible for the account at given times. In keeping with the horizontal organizing style of their general assemblies, occupiers using social media should express an individual rather than an authorative voice. Personal responsibility and transparency in Occupy’s media will increase its effectiveness. 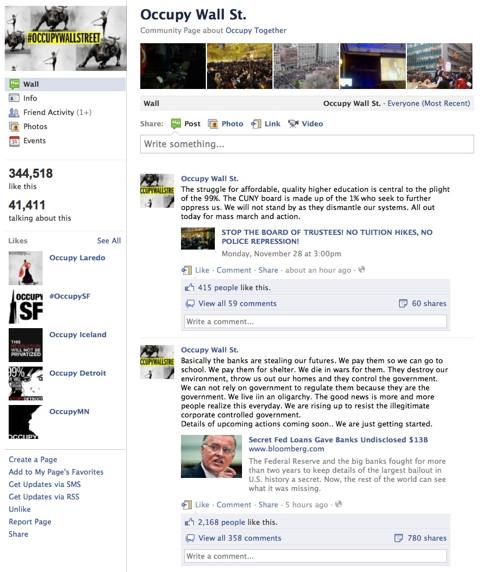 Social. This is the area I think holds the most promise for the growth of Occupy. Most working class people can’t take a few hours in the day each week to attend City Council hearings, nor can they attend Occupy general assemblies and committees. Gov 2.0 advocates have been preaching concensus for years, and have helped build the tools to achieve it, including a whole industry of “ideation” tools meant to help scale decision-making and consensus among large groups online. It is simply wrong to criticize representative government if only a small group to have the opportunity for their voices to be heard in the movement. Occupy needs to open up decision making to wider groups that aren’t physically present, and the Internet has the tools, from MixedInk (collaborative writing) to wikis to Google Moderator (ideation).

The general assembly model, where relatively small meetings can take hours to reach concensus, can easily be replicated online through use of threaded commenting that includes short video, direct voting, and time limits for contribution and concensus. A three-hour meeting among 300 people could easily be opened up to thousands or tens of thousands over a 24-hour time period, complete with transparent facilitation, group moderation and rich use of examples and background resources. The tools for mass direct democracy online are already in place, and if Occupy uses them well, the movement’s success will go far beyond what Gov 2.0 hopes to achieve.

Adriel Hampton is chief organizer at NationBuilder and founder of Gov 2.0 Radio. He is a frequent speaker on open government, social media, and technology innovation and

Adriel Hampton is chief organizer at NationBuilder and founder of Gov 2.0 Radio. He is a frequent speaker on open government, social media, and technology innovation and is president of the San Francisco Technology Democrats. In 2009, he became the first person to announce a run for Congress through Twitter. He has more than 12,000 followers on the popular micro-blogging platform and is also manager of the popular Government 2.0 group on LinkedIn. He also produces and hosts Leaders and Creators, the NationBuilder podcast featuring the world's top organizers.