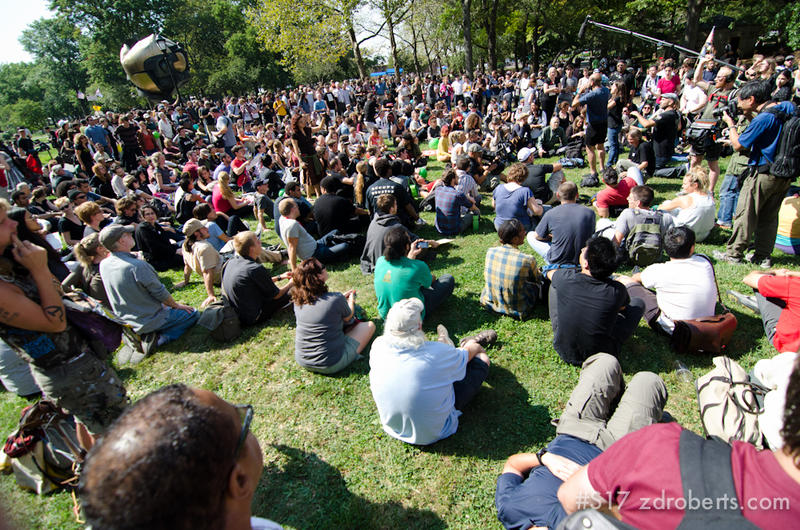 Groggy on the subway at 6:30 AM, badly needing coffee and headed across the river to Manhattan, I hear the conductor announce over the loud speaker that “The Broad St J station [the station closest to the stock exchange] is closed for ‘an investigation’.” (A friend later in the day tells me his conductor announced, without the Orwellian phrasing preferred by the MTA, that it was closed because of Occupy Wall Street protests). NYPD repression is evident before I've even left Brooklyn, and would be on violent, constant display throughout the day of protest marking OWS’ anniversary, which saw over 180 arrests.

The morning’s actions were a swirling, chaotic mix of marching, chanting, street theater and blockading throughout the financial district. Much of the action was decidedly less militant than the financial district protests of November 17 or Mayday, with marches largely staying on the sidewalk, although a couple breakaway snake marches took the streets and held them. Cops were everywhere, but so were protesters, distributed throughout the area, converging and dissipating at flash points both planned and unplanned.

Wandering the district, text alerts inform people to show up at Williams and Wall for a blockade, to appear at Zuccotti in solidarity with labor allies, to take over the world financial center, to march to Bowling Green for a spokes council. A group of about two hundred briefly shuts down the West Side Highway. Water balloons are distributed to throw at the Wall Street bull, but no attack materializes. A huge crowd gathers at Nassau and Pine, where the police have completely blocked the streets leading to the stock exchange, keeping us pinned to the sidewalk. Two guys, one in an Obama mask, one wearing Romney, somehow slip through police lines and march down Nassau holding hands, arms raised high above their heads, alone in the middle of the street between rows of shocked and confused police, who don’t arrest them before everyone has seen it and erupted in mad cheers. 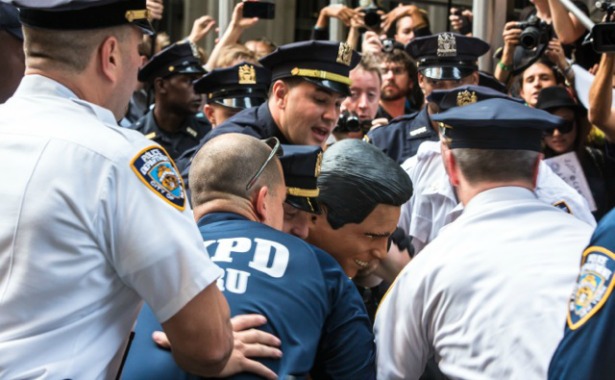 A crowd of five hundred marches down Water street, chanting “A-Anti-Anti-Capitalista”. Police dive into groups of protesters on the sidewalk, pulling individuals out at random and slamming them to the pavement. People pause to take pictures of an incredible fake NYPD advertisement, featuring drones firing a missile at a family, with the tagline “Protection when you least expect it.” A group sits down in a circle in the middle of Liberty and Nassau, linking hands and chanting ‘Om’, then run laughing down the street as the cops come in swinging. Big pink and red balloons litter the streets, appearing at our feet throughout the day. A UPS driver, his truck trapped in a crowd of marchers, makes eye contact as I walk by, smiles, and says “Welcome back.”

Delirious from three hours’ sleep and six hours’ marching and wandering, we lie down in the grass of Bowling Green, shoot the shit, and check arrest reports on Twitter. We walk to Foley Square, which, surrounded by police barricades, has been completely abandoned save for a Socialist Alternative literature table. A couple dour Trots eye us expectantly, while a girl of about five in a red sloganned t-shirt operates the button maker, her father sitting behind her reading. 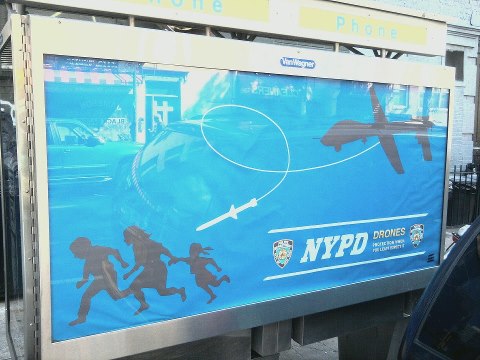 No single major action occurred, but the morning and afternoon activities of S17 reorganized and reoriented the financial district into a living zone of contention. And while less militant and aggressive than we had become by the end of last fall, that vital energy was there, that indescribable feeling that something different is happening. If there was no center of activity, everywhere you turned people were swarming the sidewalks, chanting, fleeing the police, hugging friends and comrades, pausing to down a cup of coffee and a quick slice of pizza. These dispersed, psycho-geography realigning days of action are great: we need more of them, and we need them outside of the financial district, where the vast majority of people are bankers and pigs. If a huge march can bring media attention and display our power, neighborhood wide distributed actions open up a new experience of the city, unleash creativity and produce situations exposing the limited flows and uses of urban space, as well as the state violence inherent to those limits. 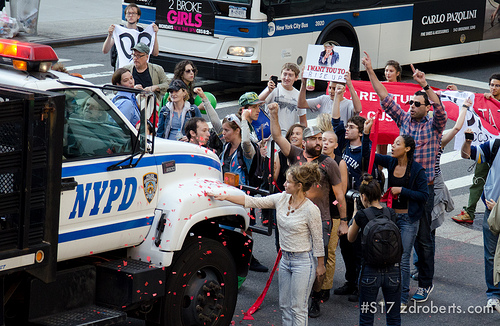 In fact, the possibilities produced by this type of action were on much stronger display than the over-determined ‘pre-figurative’ power of the camps. The evening was a complete dud. An assembly was called for 6 PM at Zuccotti, with a march planned for 8. But as 8PM came and went, the assembly continued to argue about whether or not to march. The facilitation working group kept extending the meeting, using procedural moves to counterpoint every statement for marching with a ‘tactical suggestion’ against it. People, bored, dribbled out of the park, which was caged by security barricades, with only two entrance/exits on the North and South sides. When a march finally took off, around 9:30, only about one hundred fifty of the thousand plus left in the park headed to Foley Square, followed by almost as many cops.

Zuccotti and General Assemblies have become liabilities. The existence of a permanent facilitation working group, though theoretically open to all, functionally means that a certain group of people control debates. The use of GAs to make group decisions about actions, rather than as a space where people can announce their plans—the original intended function of the GA—is a proven block to militant action. By the end of the evening, there was a nasty racial dynamic as well, with people of color again and again calling to march and white facilitators shutting them down.

The campaign of total police control had also scared many who were wild and fearless last fall. A number were calling for us not to march, because we would ‘end up getting ourselves hurt.’ Others said that we would be doing a disservice to those who were arrested, by pissing off the police and making them hold arrestees prisoner longer. And a number of people clearly just want to stand in Zuccotti and hang out all night, surrounded by police and not even allowed to lie down, which would be fine if they didn’t want to stop other people from doing what they want, to control them, police them. 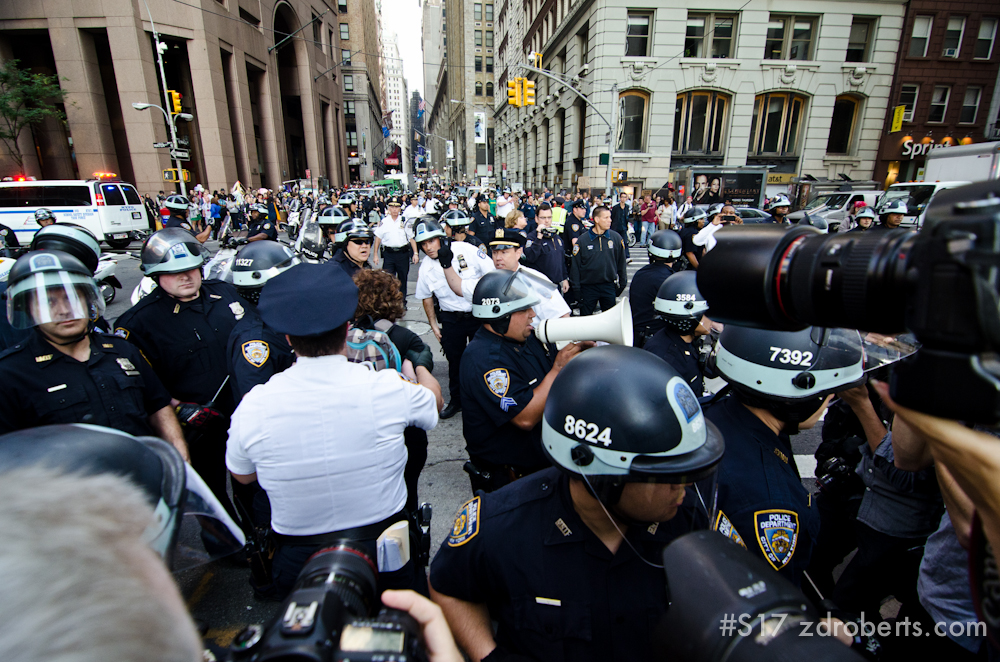 S17 seemed to show that the rumors of Occupy’s death have been greatly exaggerated, but that there are serious problems at the heart of ‘the movement’. Many people have become married to an authoritarian and fearful conception of radical action, to a closed idea of what occupy ‘is’, who occupiers ‘are’. As autumn progresses, the split between self-proclaimed ‘occupiers’ and those of us less interested in forming an identity through pseudo-political gestures than in building a new world will only get more stark. But after the day’s activities, I feel much more optimistic about the possibilities of action this fall. The move will just have to be out of the parks and into the streets.