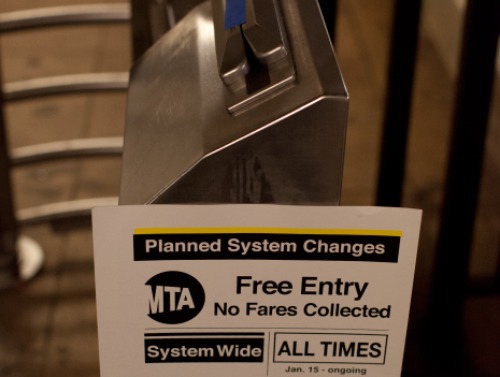 Okay, no one actually stole a train. But this morning a project calling itself the "Rank and File Initiative" chained open subway service gates around New York City, opening them free to passengers, in act of disobedience and reclamation. In a letter sent to the new site Strike Is A Verb, the saboteurs explained their actions by linking the Metro Transit Authority's budget cuts and Wall Street wealth:

For the last several years, riders of public transit have been under attack. The cost of our Metrocards has been increasing, while train and bus service has been steadily reduced. Budget cuts have precipitated station closings and staff / safety reductions. Police routinely single out young black and Latino men for searches at the turnstile. Layoffs and attrition means cutting staff levels to the bare minimum, reducing services for seniors and disabled riders. At the same time, MTA workers have been laid off and have had their benefits drastically reduced. Contract negotiations are completely stalled.

Working people of all occupations, colors and backgrounds are expected to sacrifice to cover the budget cut by paying more for less service. But here’s the real cause of the problem: the rich are massively profiting from our transit system. Despite the fact that buses and subways are supposed to be a public service, the government and the MTA have turned the system backwards—into a virtual ATM for the super-rich. Instead of using our tax money to properly fund transit, Albany and City Hall have intentionally starved transit of public funds for over twenty years; the MTA must resort to bonds (loans from Wall Street) to pay for projects and costs. The MTA is legally required to funnel tax dollars and fares away from transportation costs and towards interest on these bonds, called “debt service.” This means Wall Street bondholders receive a huge share of what we put into the system through the Metrocards we buy and the taxes we pay: more than $2 billion a year goes to debt service, and this number is expected to rise every year. If trends continue, by 2018 more than one out of every five dollars of MTA revenue will head to a banker’s pockets.

This much is clear: the MTA’s priorities are all out of whack. This fare strike is a means for workers and riders to fight for shared interests together — but this is just a first step. All of us — the 99% — have an interest in full-service public transportation system that treats its ridership and employees with dignity.

The MTA is a shared, public service — fund it with tax revenues. Eliminate free money for bondholders at the expense of taxpayers. End the assault on worker’s livelihoods.

The operators affiliated with Transit Workers Union Local 100 have been operating without a contract since January 19, 2012 and some public figures associated with organized labor have been talking about being more proactive. But a shut-down strike of the subway could alienate much of the city who rely on it every day. Instead, what are called "wild-cat" union elements, along with occupiers gearing up for a declared May 1 general strike pulled the kind of imaginative action that some activists hope to generalize in the coming months.

For a long time we've heard from established voices that Occupy needs to collaborate with unionized workers, even if not necessarily the official bureaucracy, and work on a common agenda. Now it looks like some folks have figured out a way to do something like that. Whether others will pick up the tactic or something similar, only time will tell, but I wouldn't be surprised.

There are kinds of lawlessness that we (and even the authorities) accept as part of cities – whether graffiti or jay-walking. Maybe that set of behaviors will extend to giving other people a ride.