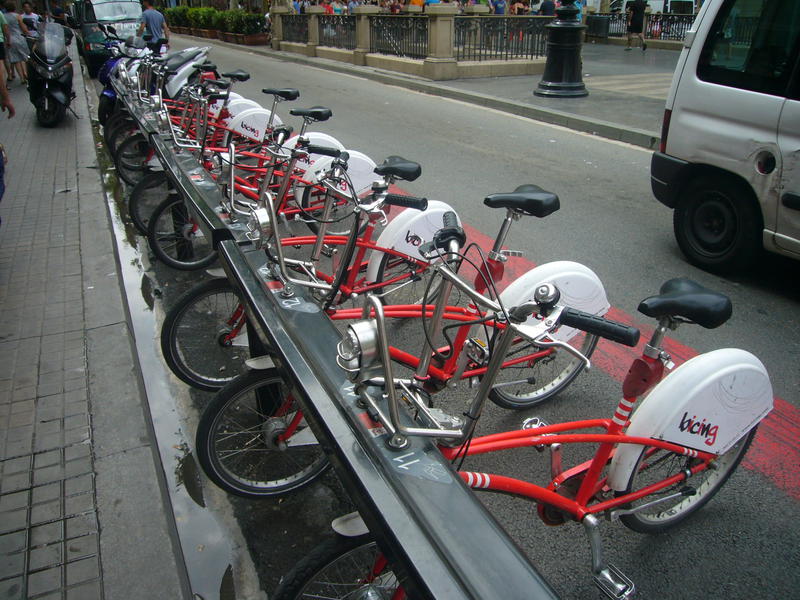 Barcelona’s Bicing bike sharing program is one of the world’s most successful and famous programs. Started in 2007, it uses a membership system that allows anyone with Barcelona residency, for a small yearly fee, to use the bright red and white bikes distributed throughout the city. This makes a huge difference to the population of one of the world’s most tourist-heavy cities, and offers its 150,000 local members an easy way to get around the city. But this month, the state of Catalonia has decided to dramatically hike fees for Bicing, more than doubling the cost for membership. When pressed on the issue, government representatives said that if people don’t like it, they should buy their own bike.

Austerity politics always come down hard on public transit, and these cuts come down hardest on forms of transportation (bike shares, walking, etc.) that have neither powerful lobbies nor massive industries. In the US, the Federal Government’s Surface Transportation Fund only gave a measly 2% of its budget to biking and walking services, despite the fact that more and more people in America are preferring these methods of transportation. Only 2%, that is, until this summer, when the new spending bill de-funded many of these already under-funded programs, leaving struggling states, forced to balance their budgets, to go their own with the most sustainable, practical and cheap public transit projects. Unsurprisingly, many of these programs are losing out.

Public transit across the country has also been burned by bad Wall Street bond deals. When it comes to high-cost small profit-margin propositions like public transit, privatizing monetary streams tends to mean burdening the organizations with massive debt and then squeezing consumers and workers to get as much profit back as possible. Constant threats of bankruptcy lead to fare hikes, weaker labor contracts and ultimately, worse service. No one benefits from this process except the lenders. This can be seen most clearly in Greece’s rail system, which has become a total wreck. I’ve embedded an excellent documentary, called Catastroika, which explains how this has worked in Greece.

What can people do to fight for these public transit institutions? With Bicing, people are organizing a petition as well as a protest campaign to fight these cuts and try and save the program. But it has become clear we will need to see solutions that go beyond both government funding and private investment schemes.

Ground-up transit operations like bike co-ops and car shares point in the right direction: but can we imagine a truly democratically run, fully-integrated transit system, one managed by its workers and customers? What would cities look like with bikes, buses and even subways truly run by their citizens? For now, the question is pie-in-the-sky, but public transit truly run by the public and for the public would make cities more equitable, more green and less prone to tempremental whims—of market forces and politicians alike. If we start imagining and buildling these systems today, we can start building the cities we’d like to see in the future.