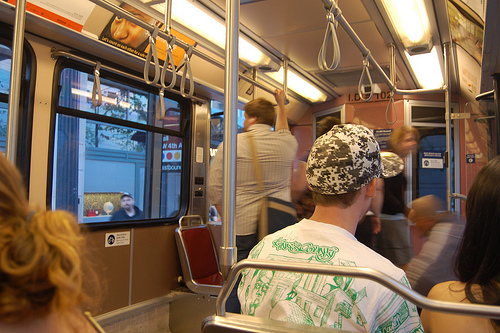 Bicycles shine today as the symbol of vibrant cities—they pop up in fashion spreads and movies having nothing to do with transportation as signifiers of youthfulness, coolness and sexiness.

Copenhagen and Amsterdam win worldwide kudos for their fabulous network of bike lanes. Paris, Lyon and Montreal have demonstrated the efficiency of bikesharing systems. Portland and Minneapolis have put themselves on the map as “happening” towns, in part because of their blossoming bike cultures.

But great cities also depend on public transportation.  Images of buses and trains may never be as sexy as fashion models astride two-wheelers, but they are just as important to the future of sustainable, shareable, livable cities.

Public transit has experienced a quiet renaissance over the past two decades as the number of transit systems nationally has jumped from 1044 to 7700.   Transit use began climbing in the mid-1990s as light rail systems sprang up in many cities and bus service was beefed up in other places. Before the economic slide in 2008, public transportation was carrying more passengers than any time since automobiles began to rule American cities a half-century ago.

But, unfortunately, public transportation now faces an uncertain future. Many cities are slashing service or raising fares due to budget woes, and even more drastic cuts loom in Congress.  Transit systems depend on public funding to give people of all ages and incomes a way to get around each day, which means the anti-tax, anti-government mood driving decisions in Washington and many state capitals could cripple service in places across the country.

At a time when gas prices are passing $3.50 a gallon for the second time in three years and global warming remains a catastrophe on the horizon, cutting back buses and trains   seems the height of folly. Especially in the midst of an economic crisis challenging most American households.  The American Public Transportation Association estimates families in large metropolitan areas saves $9656 on average annually by taking transit instead of driving, citing January 2011.

So, to celebrate the potential of public transportation (which among other virtues is a commons shared by all) here’s a list of the 10 Best U.S. Cities for public transportation from U.S. News & World Report a magazine famous for their college rankings. Also listed are the three worthy runners up. (Accompanying color commentary is from yours truly.)

3.)  New York (Life here would unimaginable without transit. It’s the only major U.S. city where more than half of all households don’t even own a car.)

4.)  Boston (The birthplace of subways in America, Boston’s compact settlement makes trains and buses a way of life.)

5.)  Minneapolis-St. Paul (A shocker to me, and I live here. A good bus system now augmented with light rail. U.S. News awards it extra points for a stellar safety record.)

7.)  Los Angeles (Even more of a shocker than Minneapolis, but Angelenos have been quietly assembling a respectable network of rapid transit alongside one of the world’s most extensive bus systems.)

9.)  Denver  (A little-low on the list, I argue, for a city where voters have said “yes”to an impressive network of light rail lines.)

10.)  Austin (I’m skeptical, but must admit it’s been seven or eight years since I last visited.

11.)  Washington (Way low for a city with some of the most walkable suburbs in America thanks to its wide-ranging Metro system.)

12.)  Seattle (For a city that built a demonstration monorail in 1962, Seattle was late in the game in expanding transit beyond buses.)

13.)  Chicago (The Windy City should demand a recount. The el trains and buses go everywhere you need to go.)