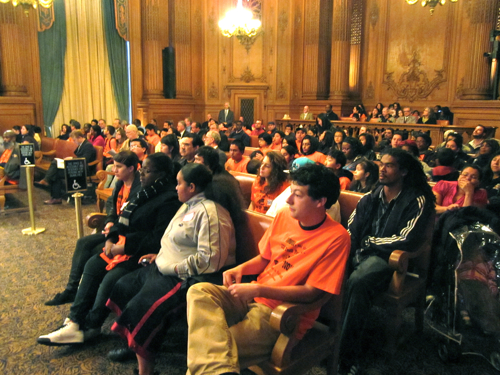 This morning I attended part of the San Francisco Municipal Transportation Agency board meeting, where they considered a proposal to increase fares and cut service–again.

Anyone who rides the Muni (SF's public transit system) knows that the situation on the buses and trains has been catastrophically deteriorating. An analysis by Streetsblog of daily Muni performance in the past month "shows Muni has been missing 80 percent more runs compared to June [of last year], mostly due to a freeze on overtime." Eighty percent–that's on top of a series of service cuts. These budget cuts and missed runs translate into genuine misery on the buses, as I can tell you from first-hand experience. Many people I know are driving more, thereby increasing San Francisco's carbon footprint.

Meanwhile, City College of San Francisco has cancelled all of its summer classes–which is preventing my wife from finishing her early childhood education certificate–and the public school system is trying to slash $113 million from its budget by the fall–when my son will be entering kindergarten. Those are just examples of the cuts my family is directly facing; many people–seniors, the unemployed, the uninsured, to name a few–are faring much worse.

Most people reading this don't live in San Francisco, but I'll bet that your town is facing similar issues. Times are tight, and our quality of life is taking a hit. Across the board, around the country, cities and states are cutting shareable resources like transit, parks, schools, and libraries, at just the moment people are relying on them more than ever.

But not everyone is taking the same hit. People can buy their way out of the shared transit crisis by purchasing a private car or driving their car more often; people can buy their way out of the shared education crisis by sending their kids to private schools. Despite our fairly hardcore commitment to public transportation and public education, even my family has applied to private schools and, incredibly, I have considered getting a car.
It goes without saying that economic crises can drive people apart, atomizing individuals, destroying communities, and widening social divisions. Today, we're seeing that happen. But there's a flip side as well: As this site exists to document, economic crises also compel people to share more of their stuff and their lives. There are ways to help each other through this crisis that are entrepreneurial, DIY, and communal, and we're seeing hundreds of projects spring up to meet community needs.
But my opinion is that it can't stop with individual, DIY solutions, which are mostly about day-to-day survival. Shareable transit like buses, light rail, and commuter rail take many more cars off the road than do carpooling and carsharing services. The research unequivocally shows that targeted public investments in education and health care do more to remedy inequality than individual charity ever does.
At the beginning of the twenty-first century, we Americans are stumbling into a suburban cul-de-sac (a Catalan phrase that means "bottom of the bag," by the way) beset by environmental collapse, ignorance and isolation, and mindless violence, both real and imagined. Decades of tax-cutting and deregulation have undermined the commons, the resources that we share. As Jay Walljasper writes on Shareable:

Unfortunately, taxes are rarely discussed today as part of the common good. Right-wingers scream bloody murder any time a tax increase is even mentioned, stirring up talk radio mobs that equate any form of government action as folly or tyranny, while liberals largely duck the issue out of fear.

It’s high time to reframe the debate about taxes, before the infrastructure and social fabric of our communities starts to deteriorate right before our eyes.

Taxes should be viewed as a commons, a cooperative effort to take care and improve the things that belong to all of us. If you add up the huge contribution that good schools, police protection, parks, public health measures, libraries etc. make in our lives, it’s easy to see that the money we pay in taxes is the best bargain in town.

Part of the problem with taxes, I suspect, is that we often pay them in such a large chunk–we don't fret nearly as much about putting thirty dollars of gas in a tank or paying two dollars for a bus ride. And according to a new analysis by the Victoria Policy Institute, Raise My Taxes, Please! Evaluating Household Savings From High Quality Public Transit Service, paying those taxes for shared infrastructure, as opposed to paying for lots of privately provided services, saves us money as individuals and as a group:

Providing high quality public transit service typically requires about $268 in annual subsidies and $108 in additional fares per capita, but reduces vehicle, parking and road costs an average of $1,040 per capita. For an average household this works out to $775 annually in additional public transit expenses and $2,350 in vehicle, parking and roadway savings, or $1,575 in overall net savings, in addition to other benefits including congestion reductions, reduced traffic accidents, pollution emission reductions, improved mobility for non-drivers, and improved public fitness and health. Physically and economically disadvantaged people tend to enjoy particularly large savings and benefits since they rely on alternative modes and are price sensitive.

That seems sensible, doesn't it? But we live in a country that has been shaped by three decades of revolt against the common good, most prominently expressed as a revolt against taxes. Private enterprise has supposed to fill the gaps, but the results are in, and corporations have failed to deliver. Refusing to share has made us poor. Today, we need a pro-tax, pro-public sector revolt, people speaking up for the commons, contributing to the commons. We need it right now.

If you do live in San Francisco and you depend on shared transportation, please consider signing up for the effort to launch a Muni riders' union.