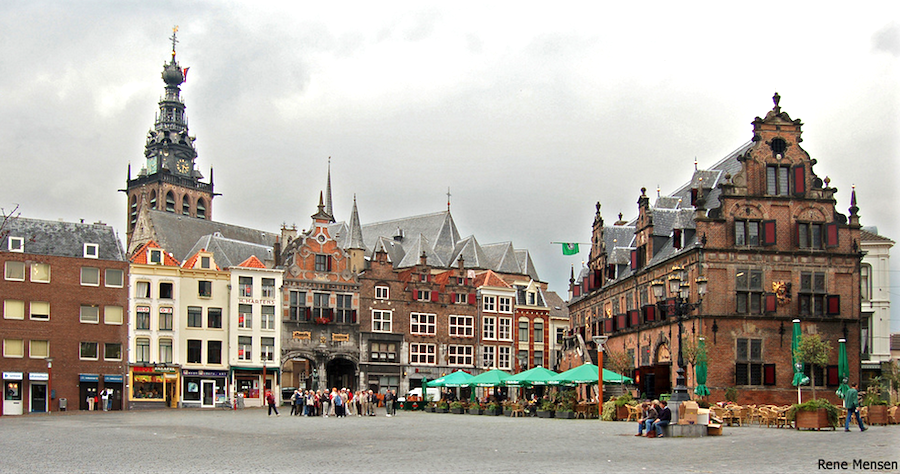 In 2013, Ronald van den Hoff, founder of Seats2meet, introduced Shareable co-founder Neal Gorenflo to Nils Roemen. A Dutch consultant, community organizer, and sharing activist, Roemen has co-founded numerous sharing projects. One of his first was DareToAsk ("Durftevragen" in Dutch), a workshop based on tapping into social abundance by inviting people to ask each other for help.

Gorenflo and Roemen hit it off immediately and realized that in 2006, around the same time Roemen was facilitating DareToAsk workshops in the Netherlands, Gorenflo was facilitating gift circles in the Bay Area. The concept for both projects was the same: there is abundance all around us—we just have to ask. Gorenflo went on to co-found Shareable and Roemen continued to organize and build community around sharing in Nijmegen.

One of the oldest cities in the Netherlands, Nijmegen celebrated its 2,000th year in 2005. Thanks in large part to Roemen, the city is now establishing itself as a sharing city. ShareNL, an official sharing platform for the Netherlands, serves as a central channel for sharing projects, but Roemen says he’s too impatient to wait for the government to implement sharing—he takes the hands-on approach.

Through hands-on, peer-to-peer organizing, the local sharing community in Nijmegen has grown into a large network of people who share not only their knowledge, but their stuff, their time, their workspace—whatever they have excess of. As Roemen explains, they started sharing everything and exploring more of the area's abundant resources.

“Now that Nijmegen is a sharing city,” he says, “Let’s see what can be of use to live in a certain state of welfare and happiness. The basic assumption is that there is enough, it’s just not evenly spread out.”

Acknowledging the ongoing tension between good ideas and money, Roemen posed a question: What if you stop asking for money and start asking for what you need? The approach has proven transformative and Roemen and other sharing and abundance enthusiasts have created numerous no-money, sharing projects in Nijmegen. Here are some of the standouts.

Out of the DareToAsk network was born Nijmegen Dialogue, a project focused on building bridges between communities that don’t normally meet each other, including the rich and the poor, and Muslims and Jews. The inspired project was created and produced without money.

“People could contribute with everything they want,” says Roemen, “except for money.”

Organizers relied on the community for everything, including marketing. They even got a supermarket chain and a bank’s ATM machines to print an invitation to join the Nijmegen Dialogue on their receipts. It cost nothing and had a big reach. Roemen attributes their ability to get big businesses onboard to the people within the businesses who believe in what they’re doing.

“If you look at it from the outside, it looks like a big business,” he says. “But it’s about knowing the person inside the business who is interested in your idea. It’s not the bank CEO then down, it’s individual people within the bank who are interested in the project.”

Riding the sharing momentum, organizers took on a country-wide project. Dubbed 7 Days of Inspiration, the idea was to give the Netherlands an upgrade in seven days. Areas of focus were education, transportation, sustainability, food and work. In one week, 2,000 people joined in and created 137 projects, including a one-night restaurant using food that would have been thrown away, and a retirement home project that Roemen describes as “Facebook in real,” where residents’ photos were hung on a wall. Yarn was then used to connect the photos of people to those they didn’t yet know and wanted to meet. 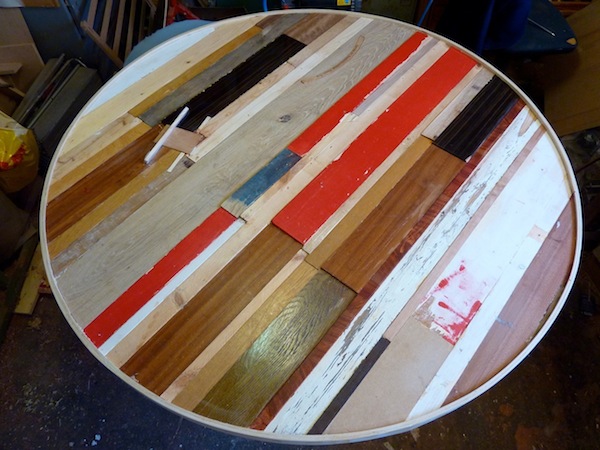 Roemen built a table with wood gathered from the community, one piece at a time.

One of the standout 7 Days of Inspiration projects was the creation of a coworking space in Nijmegen. Roemen and his team asked the local housing department if they had a room they could use to work in. They were given the keys to a building that was slated for demolition in three months. They stayed in it for three years.

Wanting to freshen the space up, they decided to furnish and paint the building without money. Roemen went door to door asking people for half a bucket of paint and one piece of wood that they weren’t using. The result was a painted work space and a beautiful table made from all the pieces of collected wood.

“If you connect all pieces that seem abundant, you can build furniture,” he says. “In the Netherlands—and I found some other countries have the same thing—there’s just too much and not too little. If you know the right places [to look], what you need is always someplace hidden; you just have to find it.”

The rule for the space was that you could work there as long as you were doing projects that benefitted the community.

“It was not a workspace for people who just want to sell things,” says Roemen. “It was for people who want to create a better place, a better world, a better city. If that’s you, you’re welcome to work here.” 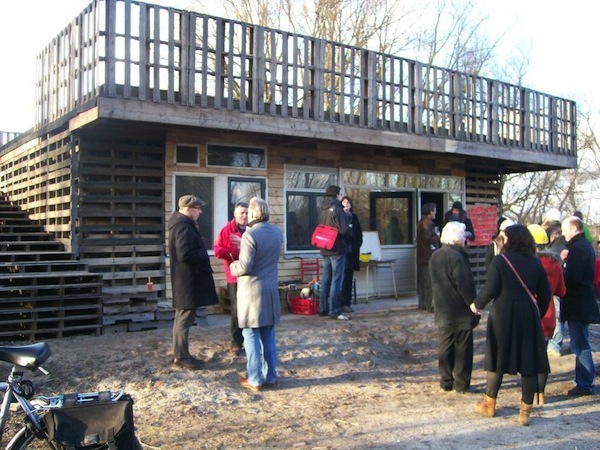 Roemen thought his friend was crazy to propose building a house with no money, yet they did it.

A House Built with No Money

Building on the idea of the no money workspace, sharing organizer Juul Martin came up with an even more ambitious plan: to build a sharing house using no money. Of the idea Roemen says, “I thought he was crazy, I still think he’s crazy, but that’s why he gets things done.”

Martin rounded up people who wanted to help realize the vision and put together a wish list and online platform for people to say what they could donate. For the foundation, they were given 6,000 concrete sidewalk tiles from the city. They used wooden pallets for the walls. Once the project gained momentum, entrepreneurs came in and offered help with various aspects, including solar panels and a toilet. The local government even loaned him a piece of land to build it on.

The house was completed, as planned, with no money. But the marvel and thrill of the project was short-lived. A week before the grand opening, someone burned the house down. Martin wrote an article in the local newspaper saying he wasn’t angry, but just curious why such a thing would be done. He asked for anyone who knew anything about it to please let him know why. 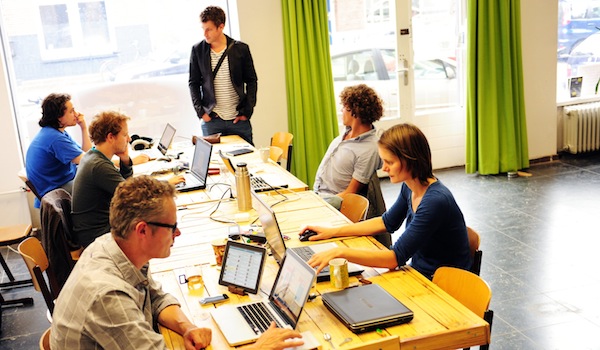 At coworking space Waarmakerij, people can work for no money if they're working to benefit the community.

When the house was burned down, the team took away some valuable lessons.

“It forced us to realize that if you really want to create a sharing city or sharing community, you better not try to focus it on one place,” says Roemen. “If the house was still there, we would be spending all our energy on that one place and leaving out all other projects in town.”

Now there are four places, including Waarmakerij, where people can cowork for no money, and later this month, sharing organizers—along with the mayor of Nijmegen—are opening the Sharing Shop, a space that will serve as an entry point for people who are curious about the sharing principles but don’t know exactly where to start.

None of the work spaces have memberships and none ask for payment. They put a piggy bank near the door if people want to make a donation to the space, and use the money for petty cash expenses like getting t-shirts printed and paying for the electricity. Internet service is donated by a provider who “thought the project was cool,” and they have no phone lines. There’s a wish list online and a request to please bring coffee, bread, or whatever the community members think would be good to have in the space. People have donated furniture, projectors, and more. 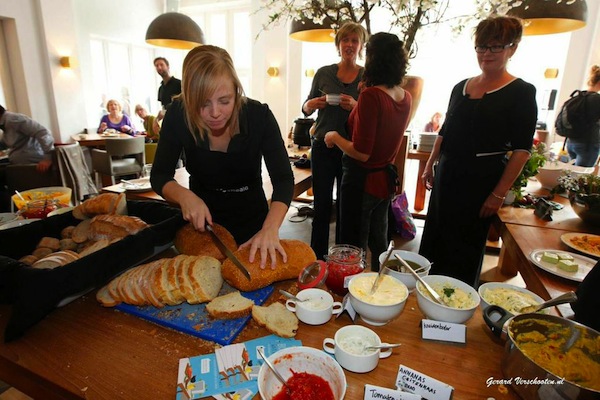 During Sharing Day, some of the city's top chefs prepared food that would have otherwise been thrown away.

During last year’s Sharing Week, Nijmegen participated by hosting a Sharing Day that involved donated food prepared by some of the top chefs from the meal-sharing platform ShareYourMeal. Volunteers collected food that was going to be thrown away and the chefs gave cooking clinics and prepared shared meals.

Now the sharing city team is doing more Sharing Days in locations around the city. The idea is to bring awareness of the abundance of resources and the idea that anyone can be involved with the sharing movement.

For Sharing Days, there are generally speakers in the morning, and afternoon “Make It Happen” sessions where attendees ask questions and pose ideas for sharing projects they have.

“What we found out,” says Roemen, "is that most people, to make their idea work, need exposure, they need a website, they need good text to be written, they need some photos, they need a good video and they need to send it out.”

To address these needs, Sharing Day organizers bring together people who can make all of this happen: web developers, photographers, writers, videographers, etc. People come in, go through the various stages of creating a platform, and within a couple of hours, everything is done.

When asked about the big picture for Nijmegen Sharing City, Roemen says it’s an experiment.

“My vision is that I really don’t know,” he says, “I’m just trying. What I find in Nijmegen is that as soon as you think you know, there will be people trying to burn it down.”

Roemen tells the story of a journalist who was questioning him in front of an audience. The journalist warned him ahead of time that he was going to ask him aggressive questions about the sharing economy. When he did, Roemen posed a question to the audience: If this is the future that’s coming up, do you want to convict it before you engage it?