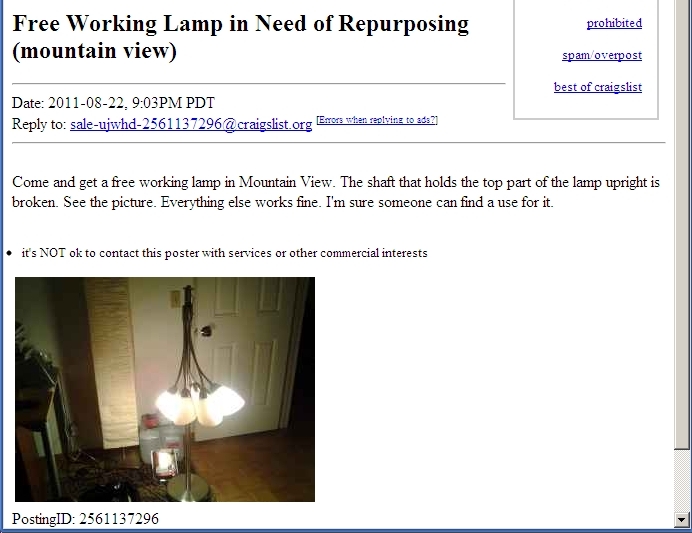 I posted a Craigslist ad in the free section on Monday. The lamp was gone the next morning.

I was tempted to just put it in the trash. After all, it's "broken". But I've learned something valuable – there's an amazing demand for "junk". I got about 10 e-mails from my Craigslist lamp ad.

And in the past, I've gotten rid of old sliding closet doors, seemingly worthless scrap plywood, sketchy furniture, and a bunch of other stuff that I can't even remember because it was so unmemorable.

Finding new owners for the sliding closet doors was a particularly good score. I would have had to pay to dispose of them. They were ugly, heavy, and huge. I was so relieved to get rid of them. And the woman who picked them up was stoked. I think she had a buyer for them. Good on her.

The scrap plywood thing was pretty cool too. The guy who picked it up was making a doghouse. I noticed he had an archery club patch on his jacket. I asked him about it because I wanted to take archery lessons. He happened to be an instructor. We exchanged cards.

He was a rare local in these parts. He shared some forgotten folklore – that Silicon Valley used to be known as The Valley of Heart's Delight. Underneath Silicon Valley's office buildings and suburban subdivisions is the most fertile farmland in California. Fruit orchards used to abound. I felt a sad, new appreciation for my adopted home.

So I have a new habit and a new faith that is solidifying with each surprising transaction – I give away instead of throwing away. I believe that everything has value. With services like Freecycle Craigslist, Giftflow, and Exchango, it's so easy to give. And you'd be surprised what folks will take and how giving will connect you to the community.

What strange and unwieldy things have you been able to give away?