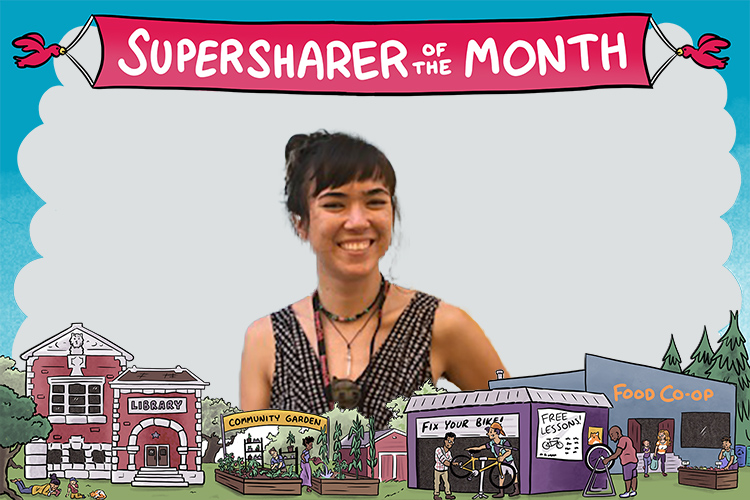 Our “supersharers” series highlights people in various cities around the world who are who are deeply involved in projects that allow people to share various resources with each other, including makerspaces, community gardens, coworking hubs, art collectives, and worker cooperatives. We’re thrilled to introduce you to our supersharer for the month of March, Mai Sutton. Here’s some background about Sutton’s work, in her own words.

Mai Sutton: I am based in Oakland, California

The project has been around since 2014, and it emerged in response to the reality that internet infrastructure has become intensely privatized and centralized. Only a handful of Internet service providers (ISPs) control nearly all of the internet access in the U.S. People’s Open Net is about building internet infrastructure that is truly decentralized and people-owned. Though our approach and hardware we use differs from other projects, we share the same values and vision as other similar projects such as Freifunk in Germany and the Detroit Community Technology Project in Detroit, Michigan. Our hope is to help people everyone become owners and stewards of their shared internet infrastructure. However, our main focus now is on Oakland, Berkeley, and communities across the East Bay Area.

People’s Open Net came out of Sudo Room, a hackerspace that resides out of the Omni Commons, a community-owned space in the Temescal neighborhood of Oakland. The Omni houses several community projects including Food Not Bombs, Liberated Lens, and Counter Cultural Labs. The space feels like my second home. I love being at the Omni to be around people working on all kinds of other commoning projects and getting inspired by all the ways people share resources with each other.

I’ve more recently started working at the Oakland Public Library. Working at the library is transforming my thinking about the value of public infrastructure. I love this quote by Cornel West: “Justice is what love looks like in public.” Relatedly, I think about what great infrastructure looks like and it seems to me to be a type of public love — where every single person is treated with dignity and respect and where strong communication of needs is central to a healthy relationship. I’m in love with Oakland, and working at the library lets me express my love for this city by listening to people’s needs and doing whatever I can to help anyone who walks into the library.

Lastly, I’m a Digital Commons Fellow with the Commons Network, which is an advocacy and public policy organization to expand and defend the commons in Europe. We are working on some exciting publications to help frame commons-based policies with the upcoming EU elections in mind. The hope is that we can help EU policymakers take substantial action on policies that support commoning. I believe that digital commoning is in many ways an ends to other means — that digital networks and tools should allow us to have better communication, and stronger relationships. These are fundamental components to partake in other, more tangible types of commons such as housing, food, and transportation.

I’m part of the earliest generations of digital natives. I grew up with the internet, and recognize how it can be an incredible avenue for human connection, free expression, and knowledge sharing. Despite all of the problems with it, I believe that most of those issues stem from the fact that much of our information communication infrastructure is operated or controlled by multinational tech companies and oppressive government policies.

I became involved in the People’s Open Network because I wanted to help build alternatives. I have been involved in international technology policy off-and-on for the past 8 years. Over the course of that, I decided that we could only make small improvements regarding how tech companies are regulated in the ways they treat their users and subscribers. Policymakers listen to tech platform companies like Facebook, Google, and ISPs like Verizon and Comcast, because they own and control this infrastructure. Surely lobbying and all that is involved, by I think it’s also that public officials for the large part don’t know what else to do but listen to these powerful companies as they craft tech policy.

As a former Shareable employee, I saw many examples of how people were sharing and building the commons in other domains, such as in land and food. I decided that I wanted to help build alternative internet infrastructure that was based on principles of the solidarity economy.

The early dream of the internet was that it would truly decentralized, democratizing, and open. I think that having people control and operate their own internet infrastructure is critical to that.

There aren’t a whole lot of policies that make it easy to share in the Bay Area. But the Sustainable Economies Law Center is doing excellent work to change that. Just this past month, SELC succeeded in passing a set of recommendations through the Berkeley City Council to earmark funding for local businesses to convert to worker-owned cooperatives. For several years they have been providing legal support and doing policy advocacy for cooperatives and the commons to thrive in the area.

With the People’s Open Network,  core to our goal has been to be as open and decentralized as possible. Because of that, we have definitely come up against some hurdles when it comes to decision making, particularly around financial decisions.

We were entirely a volunteer-run organization up until this recently. We recognized that can be exclusive to people, since only those who have the luxury of free time and energy can participate in this project. So we thought — if we want to pay people to do things, how do we decide what projects are priorities? Do we pay people who work on the technological infrastructure side of things more than those who do outreach or administrative tasks?

There were also questions about more basic things, like how we prioritize the way we grow the network and how we spend money to do this work. We received a $100,000 grant from the Handshake Foundation last fall. It forced us to think carefully about how we could embed our values into the very core of how we run this project.

How do you create a truly flat, participatory, and open governance model to steward a commons, without getting stuck in endless deliberation and decision gridlock? This is what we needed to figure out.

We dedicated several weeks of meeting time to discuss a path forward, and came up with a process on how we spend money and make major decisions. It was really difficult to decide how to decide things but it happened! We’ve started to pay certain people for their time on an hourly basis. We decide who and what to fund through a democratic, therefore transparent and participatory, process.

We created a way for people to get involved in the project, so that they can then become part of the group who can vote on these critical decisions. This group is called the Stewards. We use a combination of in-person discussion and Loomio (the online decision making platform) to get to a decision.

We’re still working out the kinks and seeing if it works. Some might think this whole process is tedious, but these types of conversations are what we need to do to build a world that is more just and equitable. As someone has said, the commons isn’t about the resource itself, but about the relationships between the people who are stewarding it. Since we don’t have many models for how a decentralized, peer-to-peer mesh network could be organized in a participatory and inclusive way, we just have to try things and evolve as we make inevitable mistakes and learn from them.

What advice would you give to Shareable’s readers who are interested in joining or launching sharing programs like the one(s) you’re involved in?

I have three pieces of advice: