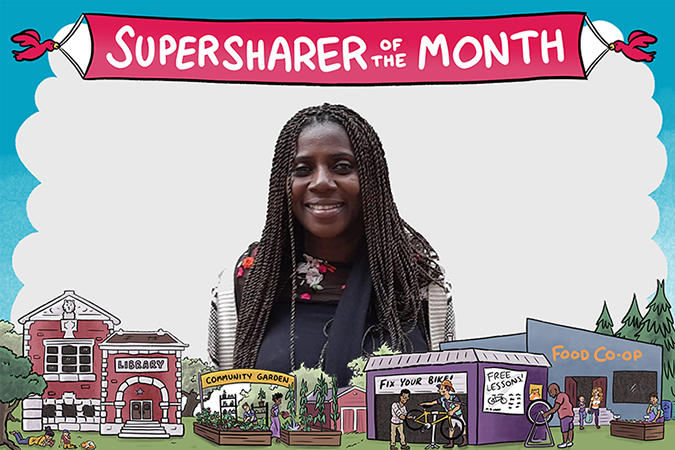 Our “supersharers” series highlights people in various cities around the world who are who are deeply involved in projects that allow people to share various resources with each other, including makerspaces, community gardens, coworking hubs, art collectives, and worker cooperatives. We’re thrilled to introduce you to Esther Ekong from Lagos, Nigeria. Here’s some background about Ekong’s work, in her own words.

Esther Ekong: I am based in Lagos, Nigeria.

I founded the Chadash Phoenix Woman Foundation which brings indigent women together to empower them. We have a revolving loan scheme where female farmers make monthly contributions that revolve around the members and several sharing projects like child care and skill sharing. I coordinate Creative Commons programs for the Nigerian Institute of Advanced Legal Studies to create awareness about CC licenses and “openness.”

The world is gradually losing its humanity as people are becoming increasingly consumed with competition and self-seeking ventures at the expense of others. I want to make a difference by bringing people together and creating the awareness that sharing brings far more gain than individualistic and opportunistic pursuit/use of resources.

Are there any individuals or organizations that helped you get involved in these project?

None that I know of, except for creating an enabling environment for NGOs to carry on such activities.

Initial distrust and suspicion of the intentions of the organizers caused by the high rate of corruption. It is sometimes difficult to convince people that a project is purely for their good — the lack of trust is as a result of years of exploitation.

We did a pilot program with a small group and when the others began to see the advantage of the project, they joined in.

What advice would you give to Shareable’s readers who are interested in joining or launching sharing programs like the one(s) you’re involved in?

Start small. It does not matter how small, just start. Have the big picture in mind but tuck it behind your mind and take small incremental steps towards achieving that big picture.