Making it Happen at Maker Faire - Shareable
Skip to content 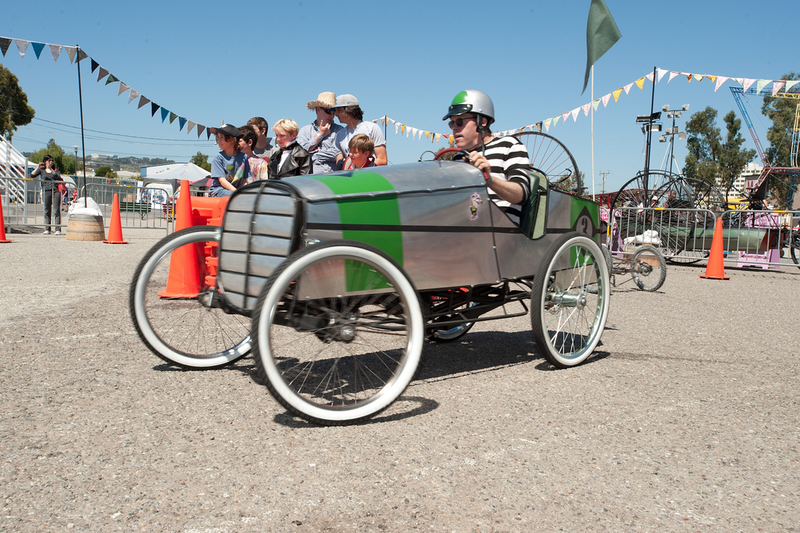 Since 2006, Maker Faire has provided a space for inventors, tinkerers, builders, crafters, and wannabe-scientists to showcase their creations with the intent of encouraging others to dabble in inventing something themselves. With large-scale kinetic sculptures racing and roaming the grounds, science experiments with electronics and activities like clothing and apparel re-purposing stations on site, participants are encouraged to touch, ask questions, and take what they learn into their own workshops for some fun experimentation outside of the Maker Faires' big top.

Sherry Huss, vice president of Maker Media, doesn't look the role of a lab-coat wearing mad scientist that one might expect to be a Maker Faire organizer. There are no beakers popping up and bubbling over in her office. She wears no tool belt as she navigates the work spaces of Maker Media's headquarters in Sonoma County, California. Yet, as anyone who has attended a Maker Faire may believe, Huss has the stuff that genius is made of. Every year, she meets with her small planning team and formulates the clever uses of time and space for what is referred to in their tag line as “The Greatest Show and Tell on Earth.”

“We do it the old fashioned way, with post-it notes and lay them out. And it somehow always magically works out,” says Huss. “You have to get your head into it because everything that is happening on site is intentional. There are very few things that just come together,” she added.

And what comes together for roughly 100,000 visitors after months of tireless planning is quite brilliant.

In addition to seeing a nearly 40 percent increase in new exhibitors each year, the contagious spirit of Maker Faire continues to spread from the Maker's Bay Area headquarters to the rest of the world. With annual events in San Mateo and New York, and over 100 mini-Faires or satellite events internationally (including Rome, UK and a rotating country Maker Faire Africa, among others), Maker Faire has an accessible, inclusive vibe that leads many to start tinkering with or concocting projects of their own.

“Making is all over. It’s not just the Bay Area,” says Huss. “We don't own the license on it…there are tinkerers everywhere.”

Space is free for makers, and event organizers only charge a small fee if an exhibitor plans to offer items for sale. Maker is also careful with the selection process, focusing on non-commercial exhibitors and ensuring that all of Maker Faire's inventive action is family-friendly and safe. Especially with so much up-close-and-personal, hands-on DIY participation.

“People are there showing their projects and sharing how they made them,” says Huss. “Our goal is to make Makers. People who come to the Faire get the confidence to become a Maker.”” 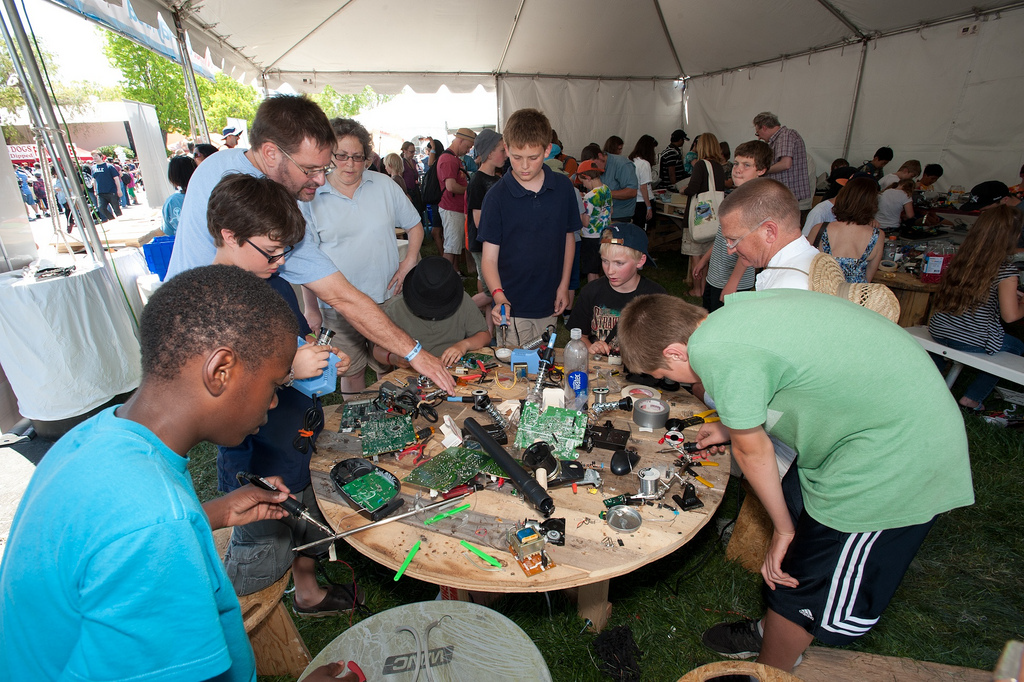 Based on feedback from previous years' attendees, demos and hands-on craft projects and exchanging ideas have been the biggest draw. Naturally, organizers continue to foster the collaborative learning that happens at the annual events that span two days. This year's theme is Maker Spaces, which is sure to be a huge hit among DIY enthusiasts. Similar to model homes and the nifty kitchen design displays at big box stores, Maker Faire will showcase these Maker Spaces to plant seeds of empowerment in the minds of aspiring makers from all walks of life. What defines these spaces, however, is not simply the presence of tools and a simple tool bench, but the act of making itself.

“Just look at Mister Jalopy, chronicling the decline of the work bench in the garage,” says Huss. “Garages now are mostly just storage places. They used to have a work bench. [When] the toaster broke, you didn't get a new one; you took it out and fixed it. I am hoping that this movement will swing it back that way.”

Although the days of dad tinkering with old radios and small appliances on his work bench in the garage were often solitary escapes, the makers and fixers of today tend to have a more collaborative focus. In addition to crews of several hundred helping hands, sponsors and organizations collaborate to ensure that the festivities go on without a hitch. In Detroit, they collaborated with with The Henry Ford Museum and Research Center. In Kansas City, they had help from the Kauffman Foundation. Portland partnered with the Oregon Museum of Science and Industry. 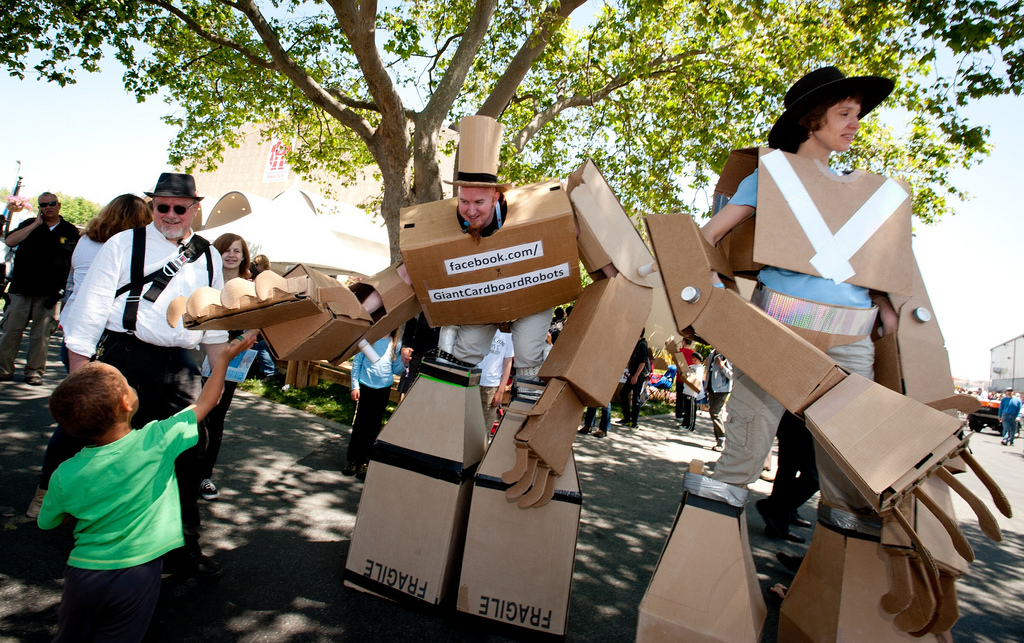 Huss isn't directly involved in programming for all of the Faires outside of New York and the Bay Area, but she provides training opportunities for those interested in setting up their own events, ensuring that the infectious Maker spirit spreads to the garages and minds of the aspiring tinkerer in all of us. After all, Maker is not just a one-time event. More than anything, Maker is a way of life that brings together communities in a too-often competitive culture, and encourages–above all else–collaboration, innovation, and fun.

“I think there is a lot of (interest) with continuing education and the Maker Space community,” says Huss. “Like the old grange where people came together; usually around food. It is so cool for people to come together to make things,” she concludes.

Dani Burlison is a wanna be anthropologist and a staff writer for a Bay Area alt-weekly. Her writing also appears at McSweeney's Internet Tendency, The Rumpus, The Los Angeles Review,

Dani Burlison is a wanna be anthropologist and a staff writer for a Bay Area alt-weekly. Her writing also appears at McSweeney's Internet Tendency, The Rumpus, The Los Angeles Review, Ploughshares, Chevy Culture Magazine, Know Journal, Bike Monkey Magazine and other publications. You can find her at www.daniburlison.com or on Twitter at @DaniBurlison