Making in a post-pandemic world: How U.S. makerspaces are recovering from the pandemic - Shareable
Skip to content 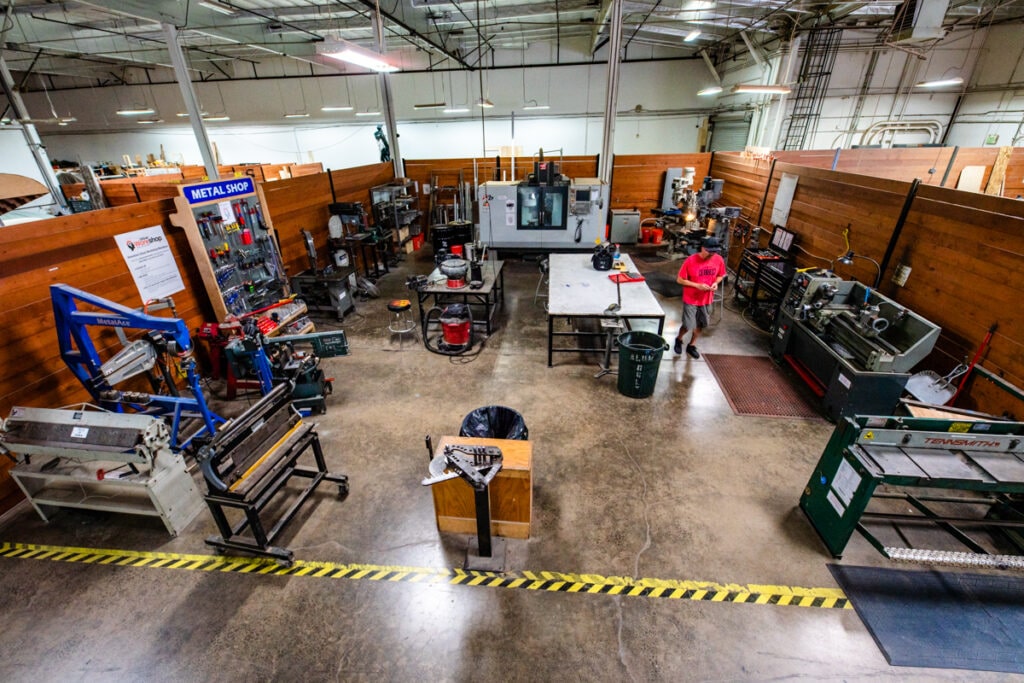 From sewing classes to 3-D printing stations, makerspaces all over the U.S. offer creative outlets for artists and creators through sharing; makers can use equipment in a space they wouldn’t have room or funds for on their own. Makerspaces are the cornerstone of the sharing economy in many cities, but when the COVID-19 pandemic hit, they were forced to close their doors. As the U.S economy slowly recovers, however, makerspaces are returning, some stronger than ever. More than a year after the pandemic arrived in the U.S., makerspaces are reinventing community and creativity for a post-pandemic world.

Steve Trinidade runs the Urban Workshop, one of the largest makerspaces in North America. On March 16th, 2020, Steve got the call that the space would have to close for sixty days: no group classes, no in-person youth programs, and no members in the space.  Urban Workshop offers onsite storage for local artists, which they were able to continue, but all programming was shuttered. “We were forced to shut down. Adult classes went to zero. About half to two-thirds of our members canceled,” he said. Luckily, some members chose to continue paying their membership dues to help the space stay afloat, and Urban Workshop shifted most of their youth programs for local schools online.

For Trinidade, the pandemic actually brought unexpected opportunities to strengthen and grow Urban Workshop’s community. “All but two of my original staff quit during the early days of the pandemic, because everybody was just scared to death. The uncertainty level was crazy. Once we got the OK to reopen, I had to hire all new staff and train everybody. But in hindsight, it was really the best thing that could have happened to me…we trained a whole new staff and took everything to the next level. It was fantastic,” he said.

Other makerspaces took advantage of the pandemic to make improvements as well. The Dallas Makerspace, a large nonprofit maker community, remodeled their space while they were closed in order to reopen with more space and more amenities. “Prior to the pandemic, we had taken over the building next door and expanded into it, but with everybody still working in the space, the upgrades were very slow, particularly the electrical upgrades. So, to bring all the electricity over, to move our jewelry, glass, machine shop and blacksmithing shop over meant extensive work and shutting the power down. But during lockdown, the government never put restrictions on construction workers. So, we were able to let the team of electricians come in and take a full month to do all the electrical work,” said James Henningson, a member of the space’s board of directors.

According to Henningson, the makerspace’s biggest asset—and the lifeline that allowed them to survive shelter-in-place—was its engaged community. “We had a large number of people who said from the start, ‘I am going to continue to pay because I want this to be here when things open back up. They really kept us strong, and we never really lost money over the course of the pandemic,” he said.

As communities across the country begin to slowly emerge from lockdown, makerspaces have opened up again—and their members are thrilled to return.  Urban Workshop now has 360 members, more than they had before the pandemic, and is continuing to grow.  They are now offering both distanced group adult classes again and individual, 1:1 mentoring for makers. “We have come to realize community life is a big part of this.  People sign up for the equipment, but they stay for the people,” said Trinidade.

The nature of makerspaces—the need for large rooms with plenty of square footage for equipment and workstations—also lends itself to social distancing, which has assisted in their recovery. “Our space is 36,000 square feet, so people are sort of bound to be spread out and distanced in the space,” said Henningson.

Although the state of Texas’ shelter-in-place rules allow for the Dallas Makerspace to increase occupancy, they have chosen not to do so and remain at 25% capacity most of the time. Dallas Makerspace is a 24-hour space, so members can enter any time and are rarely congregated in large groups. “We feel safe, because we know that we are making decisions guided by rational scientific thinking. There’s very little risk of disease in our space to our knowledge,” said Henningson.  There have been no reported cases from exposures in the space since it reopened.

Alongside reopening their physical spaces, makerspaces are creating digital ones as well. As makerspaces look toward the future, they are taking the lessons of the pandemic with them, including broadening their definition of community to include accessible online programming. Trinidade is even developing a makerspace education course to help other people start and run their own makerspaces with Urban Workshop as a model.

Dallas Makerspace offered Skillshare logins to all their members when they shut down and created online courses that they could take alongside the many already available on the platform. “Our goal going forward for long-term success is to build out a full digital content library, and digital tools to offer value for members alongside all our physical assets,” said Henningson.

The post-pandemic “new normal” will look quite different, but there is no doubt makers will be as important as ever. For Trinidade, Henningson and other makers, creating is a pathway to community, in 2021 and beyond. “I walk along the shop and see people working on things in groups, and none of them knew each other before. As the owner, I see my job as identifying these connections. I tell people the minute they walk through the door, ‘Whatever problem you’re facing, whatever project you’re trying to make, somebody in this room has already done it, and can help,” said Trinidade.