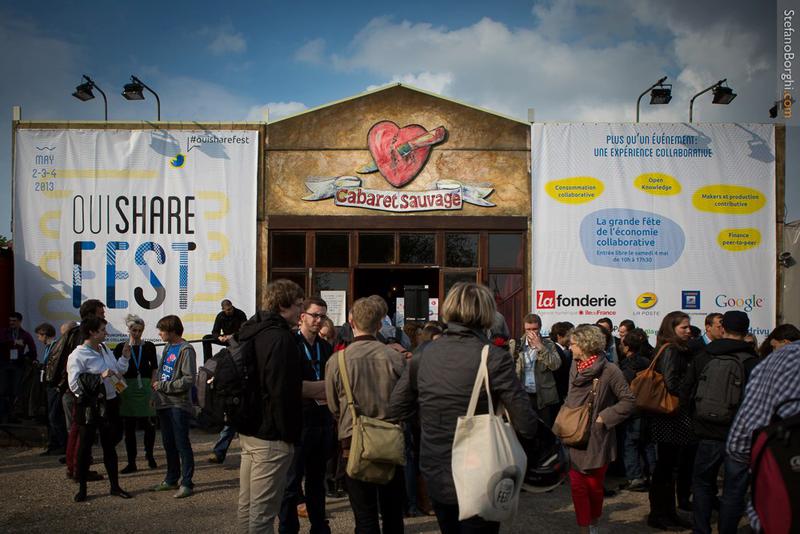 To judge by OuiShare Fest, the future is going to be collaborative–and a whole lot of fun.

A crowd of 600 mostly 20-somethings from across Europe gathered to network, learn, and party, I think in that order, although the distinctions were at times blurry. Several keynotes, for example, which were held in the deep red circus tent interior of the music venue Cabaret Sauvage, were introduced by a moppet in red rainboots dancing on a stage rendered cloudy by a smoke machine, her words barely audible over Daft Punk/Pharrell's hit "Get Lucky." We elders in attendance (anyone born before 1980, that is) strained to hear over the disco and rubbed our eyes at the Twin Peaks flashback. But this too seems to be the future, this hybrid festival-conference where keynotes and panels mix with bar camps and Maker Faire-style hands-on activities; healthy veggie meals combine with inebriants; all of it topped off with music and dancing into the wee hours. 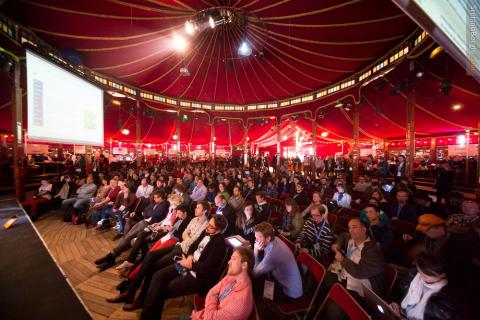 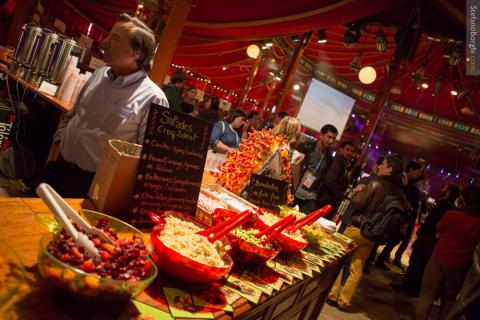 It turns out Play/Fun is one of the core values of the OuiShare network, alongside inclusivity, transparency, permanent Beta, and my favorite, MPRL (meet people in real life). And what, I asked myself, is there not to like about Fun? Pieter from Amsterdam, whose Master's thesis involves a citywide survey asking residents what keeps them from participating in sharing, gave voice to the main concern: that the sharing movement won't be taken seriously. Exactly, curmudgeon-me thought with satisfaction: if we need to compete with the corporate and governmental powers-that-be, we need to come across as grown-ups. Serious. Sober. Suits.

Or maybe we don't. Doc Searls' presentation on Friday morning, kicking off Day Two, reminded us of our power as an inevitable disruptive force in the world. He outlined the revolution we are living through: the rise of the differentiated-but-connected individual. The Industrial Era made us think we were all the same. It needed us to be interchangeable cogs of production and cookie-cutter consumers, and so our systems supported that. But in the new era you'll have your personal cloud, your customized health plan, your bespoke education, everything based on and catering to your unique genetic makeup, interests, identities, experiences, communities… Even "business is discovering that individual empowerment is good for it," Searls noted, but, yes, it's still very much in process.

For now, the tension between old and new ways makes for a sometimes bumpy ride. Older folks are looking at Sharers and wailing: what about the jobs? what about a home? what about retirement security?, while the younger ones just shrug and trust in their networks. The first person I spoke to at length at OuiShare Fest was Pavlik ("Elf"), who has no fixed coordinates and moves around like a modern day minstrel offering his IT services to those in need. He reminded me of my juggler and circus friends (indeed, later I caught him juggling) who rely on their (tech-linked) communities to shelter and feed them as they traverse continents swapping skills and busking. They are getting by and having fun in a brave new world–with trust, interconnectedness, and reputation making it work. 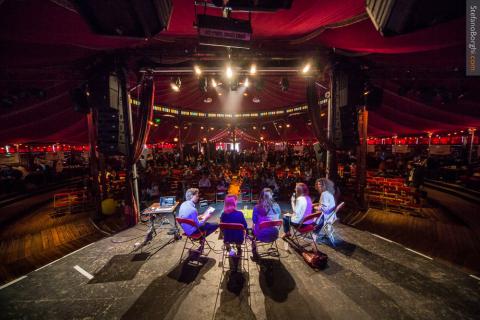 And what about the regulatory obstacles to Sharing that have been receiving almost gleeful mainstream press of late? During the most impressive panel of the conference (that I saw), four whipsmart women talked about the intersection of the collaborative economy with government: Molly Turner, Director of Public Policy for Airbnb, April Rinne of Collaborative Lab, Helen Goulden from Nesta, and Anne-Laure Brun Buisson from Sharelex. They recommended a collaborative, non-oppositional relationship with policymakers and regulators, and pointed out that most governments are in crisis, already unable to provide basic services and facing more cuts. In other words, government has never been more open to ideas like a skillsharing platform that supports employment; transportation-sharing programs that enable mobility; a time-dollar system that provides care to fragile elderly, etc. In one example of public-private partnership, peer accommodation site Airbnb is working with the city of Rio in preparation for the World Cup: this will help distribute the benefits from the influx of tourists, so it's not just big hotel chains that profit. Also, as cities struggle to plan for resilience in the face of increasing disasters, sharing enterprises can be key partners.

The main challenge right now, said the panelists, is proving to governments and officials the capacity, durability, and efficacy of the sector's mostly still small and developing  enterprises. Lining up that proof is an important next step. Airbnb's Turner said it's going to take a coalition of millions of users, not just the businesses; and (unsurprisingly) she's already begun organizing.

What proof has already been gathered–as in Day One's introductory snapshot of sample metrics– is even now fairly impressive: 300,000 rooms made available by Airbnb globally in 5 years of development, as compared with 600,000-700,000 hotel rooms built over 60+ years. By 2020 there will be 31 million members of carsharing programs worldwide. Four to five new coworking spaces open every day, adding to the existing 2,500 sites currently in operation. In 2012, 2.7 billion dollars were raised via crowdfunding in the US, while two billion dollars were lent person-to-person, sidestepping US banks, in the last two years. The wikispeed project enabled 100 volunteers to protoype a car in three months, as compared to the four to seven years it takes a commercial manufacturer. Although these numbers are still weighted towards the US, sharing is exploding globally, with the hotspots in Seoul, Korea, Rio, Sao Paulo and Porto Alegre, Brazil frequently mentioned at OuiShare Fest.

Research on the collaborative economy was the subject of another panel. The current bible is that hefty 350-page report "The Synthetic Overview of the Collaborative Economy" by Michel Bauwens of the Foundation for Peer-to-Peer Alternatives, which handily depicts the spread and clout of Sharing, factoring in things like cooperatives, crowdsourced achievements like wikipedia, and open software. The charts at the back map the burgeoning subsectors of open and distributed manufacturing (e.g. fablabs, the Maker movement, threadless); distributed finance (e.g. alternative currencies both virtual and local, microlending); distributed learning (e.g. wikiversity, TEDucation); and personal fabrication (e.g. desktop 3D printers). Bauwens' closing presentation highlighted some of the missing pieces in the sector, like a global dividend currency and an international foundation to support the commons.

The conference did its best to dip into all the above subsectors, even if real depth was understandably lacking; overall I was pleased to see almost as much space/time devoted to the (oft-neglected) production side as the consumption side. 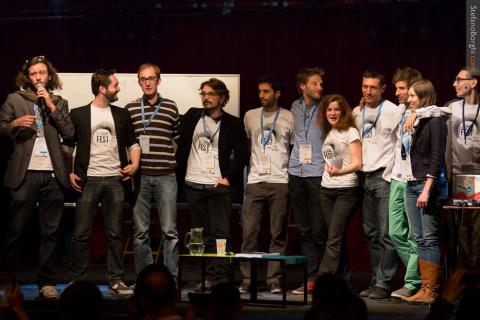 In its best moments, OuiShare Fest had me believing that Sharing is the answer to every problem we face, from sustainability (more sharing = less waste, less consumption of resources, less C02) to loneliness (it was striking to me how tech folks, once the most socially-awkward and sun-deprived of species, are so lovingly integrated here) to economic opportunities. What about the abysmal prospects for Millennials? OuiShare's rather genius co-founder Antonin Leonard praised microentrepreneurship and the online platforms that make it possible to benefit from sharing any skill you can imagine, from carpentry to coding to Cantonese. Riffing off Seth Godin, who apparently recently said: "My dad had one job in his lifetime. I'll have seven in mine. And my kids will have seven jobs at one time," Leonard noted: "I already have seven jobs at one time."

In other moments, things seemed more scattered and divisive than collaborative. There were tensions between those who see this as a space to create a profitable business to rival industry, those who herald an anti-establishment world of cooperative-ownership and equal distribution of resources, and a few who would prefer to keep the whole phenomenon free of politics and economics, more in the space of morality and values.

One panel that was titled "Creative Networked Communities" but was really about movement building and organizing–how to stay united and non-competitive as the Collaborative Economy sprawls–reminded me of the tragic self-governance processes of the Occupy camps in the U.S. My response: the collaborative economy has enough reinvention on its hands: where and when it can ride on the shoulders of others, like seasoned community-organizing experts, it should. 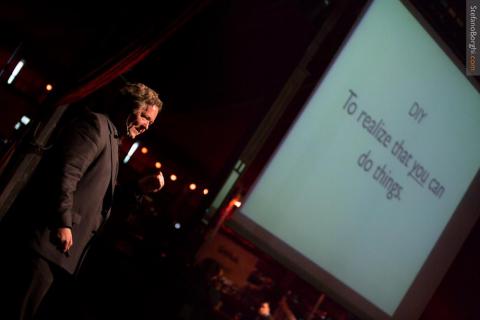 In my favorite presentation, Dale Dougherty, the founder of Maker Faire, brought things back to the heart and soul. With the Maker movement exploding, clearly this jolly man has figured out something essential about us humans, something that is resonating with people regardless of age, background, class, ability, politics, etc. "I want to live in a world where we're all producers, where we are each contributing value," he said. Makers, said Dougherty, are amateurs, the root of that word being to love.  It's not about selling or consuming: it's about finding joy and meaning in the process of creativity itself. It's about fun.

And with that, curmudgeon-me– granted, only a small part, overshadowed by the me that hula-hoops and works with real life superheroes– withered to the size of gnat. I left OuiShare Fest feeling optimistic about the capacity of this new generation to make the collaborative vision a reality, and humming Daft Punk: We've come too far / to give up who we are/ so let's raise the bar / and our cups to the stars. 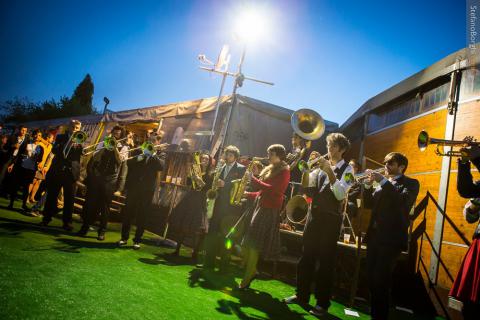 *A postscript on the talented photographer, Stefano Borghi. Last December, thieves stole some 15,000EU worth of his equipment. He's crowdfunding in order to replace it, figuring insurance will take a while and not cover everything, calling in chits with all the folks for whom he's done free or low-cost work. Naturally he was OuiShare Fest's official photographer! Read about and contribute to his campaign here.

Aka The Book Doula: I help people with Big Ideas write books. Titles include: Rebuild the Dream, a New York Times bestseller by Van Jones (Nation Books, 2012) The Story

Aka The Book Doula: I help people with Big Ideas write books. Titles include: Rebuild the Dream, a New York Times bestseller by Van Jones (Nation Books, 2012) The Story of Stuff by Annie Leonard with Ariane Conrad (Free Press, 2010); The Green Collar Economy, New York Times bestseller by Van Jones (Harper One, 2008) HOOPING, by Christabel Zamor with Ariane Conrad (Workman Publishing, 2009). I like taking complex economic, political and philosophical topics and transforming them into accessible stories that appeal to a broad audience. Recent interviews with artists and human rights activists in the independent monthly The Sun and in Spirituality & Health magazine. Also appeared in The Nation, TheRumpus.net, Alternet, Curve, and LiP magazine. Fluent in German and currently residing 3/4 time in Berlin, Germany.

Things I share: Insights, my office space (co-working at mobilesuite in the Prenzlauerberg neighborhood of Berlin), my sewing machine, my studio in Berlin..