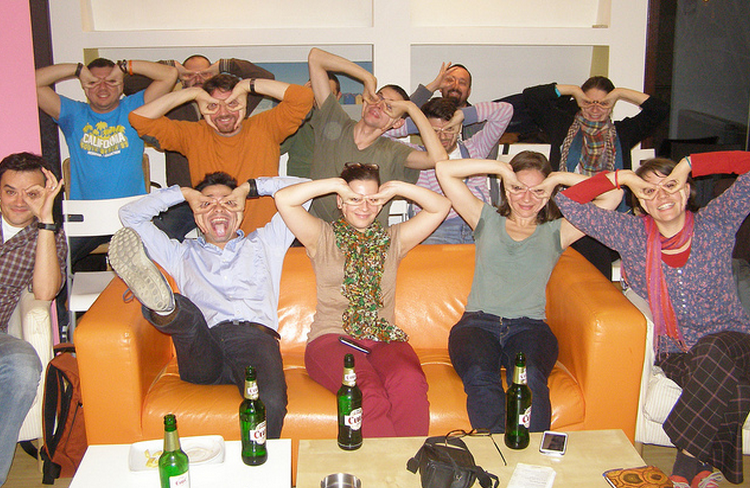 From September through early November, OuiShare connectors traveled around Europe meeting people in 30 cities to including Budapest, Warsaw, London, Berlin, Rome and more to increase engagement in the collaborative economy. Along the way, there were workshops, presentations, map jams, pitch sessions, get togethers over drinks, panels and more. OuiShare Connector Francesca Pick, who coordinated the Europe Tour, chatted with Shareable about the importance of meeting people face-to-face, staying true to your values, and what’s next for OuiShare.

Shareable: The OuiShare Europe Tour consisted of 30 events in 30 cities over two months. This is quite a feat! What was the inspiration for the tour? How did it all come together?

Francesca Pick: As with many OuiShare projects, the decision to have a OuiShare Europe Tour sort of just happened and was not really planned. Since we had already done two successful tours in the past — one in France in 2012 and one in Latin America last August — this inspired connectors in a number of other countries to have their own event series to create a real buzz around the collaborative economy.

In September we realized we were going to have tours of Germany, Spain and Scandinavia as well as a number of individual events, so we all thought: Wait a minute, why don't we combine all these events to one Europe tour? After this decision had been made and we were able to raise sponsorship money for the tour, the number of events grew very quickly to 30, including ones in Eastern Europe and France. 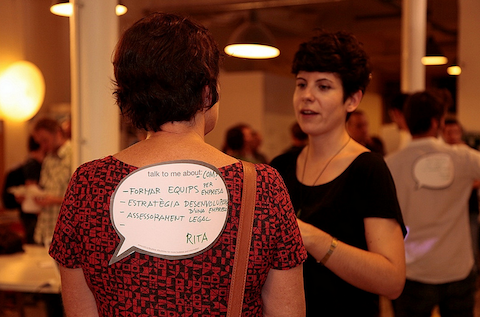 OuiShare Spain participants connecting via Talk To Me Bubbles

Did some Ouishare Connectors travel to all the events or were they gatherings of local connectors? Who was involved in planning the events? Who were the participants?

Since 30 cities is a lot of places to go, and some of our events happened simultaneously, none of us have been able to attend of all Europe Tour events. But in Spain, Scandinavia, Germany and Eastern Europe a team of OuiShare Connectors traveled to a number of events. In Germany, for instance, two other Connectors and I travelled through the country for 10 days for all six Germany events.

This is probably the most fun and interesting way to do it, especially since you can draw great comparisons between events, but it’s also a lot of work. In most, but not all, cities we had a local person who helped organize the events, but it was always a joint effort between new and old members of OuiShare. In places where we did not have a local connector yet, the coworking spaces that hosted our events were often really helpful with the organization.

Can you talk about the importance of connecting local people in-person to discuss the larger sharing movement?

Even though this may be obvious to many, one of OuiShare's most important values is MPRL: meet people in real life. And this has really proven itself to be true again and again. People need to connect regularly face-to-face on a local level and be able to discuss how the sharing economy is impacting them personally and the city they live in, otherwise it's very hard to develop a sustainable community.

On the other hand, online discussions and working together digitally plays an important role in connecting people across countries and making them feel part of a larger movement. Lots of potential is released when you connect the on and offline, the local and global – that's where the magic happens. These are the kind of encounters that OuiShare enables. 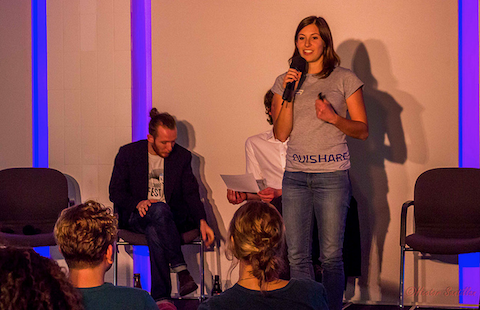 Francesca Pick, who coordinated the Europe Tour, spreads the message of sharing

What was the turnout like for the events? Any standout events that particularly caught your attention? Any surprises?

We have been very happy with the turnout so far! Depending on whether this was a first event in a city or already the third or fourth, we had between 30 and 200 attendees. I am especially proud of our events in Munich in Berlin, which each had around 200 attendees, because these were our first events of this scale in Germany. Our events in Madrid and Barcelona were also big, since the community in Spain has been very active for about one year and a half now. That has not been the case in Germany though, where we are just getting started.

What kind of feedback did you get from OuiShare Europe Tour participants and Connectors?

So far all the feedback we've gotten from participants has been very positive, and many people said the events created lots of value for them by introducing them to people in their city, who are active in their field, that they did not know yet. It's also been great to see a lot of enthusiasm from participants to become active members of the OuiShare community by joining our online discussion groups and building the community in their city.

One highlight of the Europe Tour that participants really liked was our first Sharing Economy Fair in Munich, an afternoon event where local startups and projects could present themselves with booths and interactive workshops. Since we got such positive feedback from the visitors and participating projects, we have decided to expand this event format and try it in other cities as well soon.

I think for Connectors, doing this tour has been very energizing and helpful for the further community development, since the events are a great opportunity to find new community members who would like to get involved. 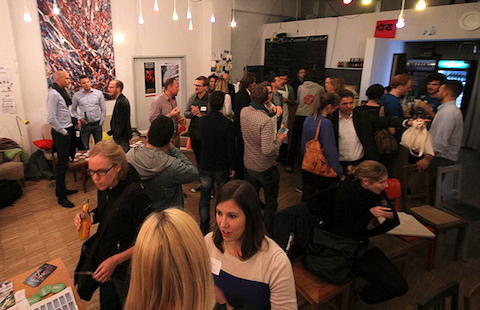 Connecting over drinks in Hamburg

What was the highpoint of the tour for you?

For me personally, the highpoint was the closing event of the Germany Tour in Berlin: great crowd, funky venue (a coworking space in an old supermarket), excellent panel discussion, an awesome pitch session with 20 pitches in 20 minutes and, lastly, the relief of having successfully completed the Germany tour!

Any lessons learned that you can share? What tips can you offer people who would like to plan a similar project?

Stay true to your values. If anything, this tour showed us that before growing your community in new places, it is more than crucial to have developed a strong culture that reflects the values you set yourselves. It is amazing to see how the energy that emerged from a small group of people in Paris is now spreading all over Europe.

Big events like this one are a great experience because they teach you a lot about what the organization you are building is, and what it is not. We realized that the Europe Tour was not about organizing the biggest or best event in each country at all costs, but about giving people that share our values the opportunity to bring OuiShare to their city.

Other, more practical advice? A distributed event like the Europe Tour is great because you can reach so many people. But, don't underestimate the amount of coordination between countries and cities necessary to make it work. It also really pays off to give local organizers as little structure as possible. You will be surprised how different and unique the events will be. Even though we set out to have mostly networking events with pitches from local projects, lots of other things emerged such as so-called a Fabber Party in Rome, a talk by Michel Bauwens in Denhaag, a Pecha Kucha event in London and a food event in Madrid. 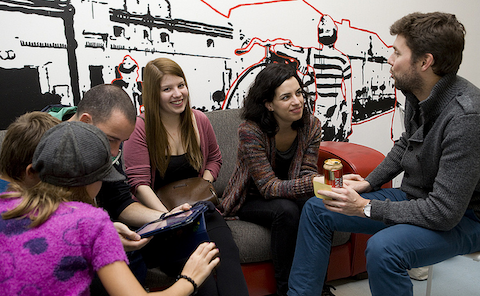 Growing the sharing movement in Budapest

What is your big takeaway from the Ouishare Europe Tour?

Even though the community will surely not grow in all the places we visited, I am very proud that we've been able to put the collaborative economy on the map in a number of new places where the concept has been mostly unknown so far, such as in Northern and Eastern Europe. I'd especially like to mention the Polish team here that did an amazing job of introducing the public to the collaborative economy and even held a webinar about the topic before the Warsaw event to awaken people's interest in it.

What's next for OuiShare?

Our 4th OuiShare Summit, in Brussels in November, where we will be spending a week with all the most active members of the community laying the groundwork for turning OuiShare into a sustainable organization. This includes working on our legal structure globally and locally, clarifying our open governance and contribution model as well as planning what our next year will look like. This work week will close with our Open Summit from Nov. 16 – 17, which anyone interested is free to join! And before I forget: you can already look forward to the second OuiShare Fest next spring!

I'd like to say a big thank you to our financial supporters MangoPay, Carpooling, BlaBlaCar, Kiss Kiss Bank Bank and Ulule. And all the dedicated individuals who have given their time and effort to make this event series possible. An event of this scale in so many countries is only possible when many people work together. And a special round of applause goes to all of you who organized a first event in your city or country. It's challenging to start from scratch in a new place, but it’s worth the effort!