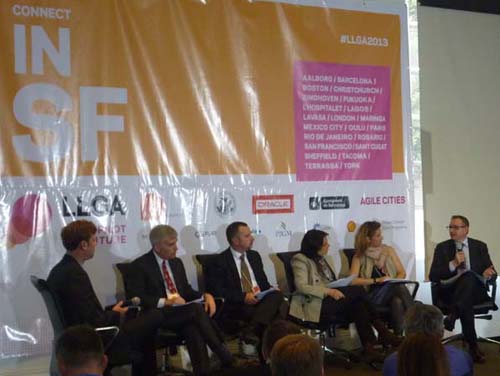 Imagine a gathering where people with different backgrounds listen to each other's specific challenges, then crowdsource a range of possible solutions. Now imagine this pool of knowledge being comprised of cities, bringing together key representatives to share information across boundaries, and you'd find yourself at the Living Labs Global Awards (LLGA) Cities Pilot the Future Summit.

This week, representatives from 22 cities gathered at Fort Mason in San Francisco to engage in a dialogue about the problems cities are facing and to come up with creative solutions to these problems. What sets the LLGA Cities Summit apart from the usual urban conferences is that the exchanges are all devoted to bringing about tangible, real world results through hands-on collaborations.

Inspired by last year's Rio+20 conference and the desire to turn that momentum into action, cities from London to Lavasa and from Sant Cugat to San Francisco committed to openly sharing their problems, which were presented through the Citymart platform to urban innovators from around the world who drew up 546 solutions over the last nine months. During Tuesday's Cities Dialogue session, the exchanges culminated in the announcement of the final match-ups that will be piloted immediately.

Here are three of them:

While leveraging new technologies plays an important role in connecting people and finding creative ways to use space and resources, Barcelona's Deputy Mayor Sonja Recasens pointed out the importance of community involvement and direct people-to-people interaction. The key question, as moderator Dr. Anthony Townsend of the Institute for the Future noted, is how to tap citizens to be service providers for each other.

Lavasa's (India) City Manager Scot Wrighton struck a similar note, saying that their challenge of integrating indigenous, low-income people into the social and economic fabric of the city called for more of an organizational than technological solution. He found LabourNet's experience with setting up training centers where local youth can develop business skills to be the perfect match for their need.

Citymart also connects cities directly with each other. By sharing their creative thinking and technologies, cities not only broaden the user base for their innovative ideas and speed up development, but they benefit from making new connections and forming lasting relationships with their fellow stakeholders.

Last year, for example, Cape Town selected the City of York's GeniUs community innovation platform, a mechanism to have conversations and co-develop solutions with businesses, academics and the community, and has since begun to develop its own pilot. Similarly, the City of Stockholm has been able to improve E-adept, an enabling solution to increase pedestrian accessibility for people with mobility challenges, by allowing other cities to "test-drive" it. Each addition to the collective knowledge base not only helps existing users refine their own application of these platforms, but makes it easier and cheaper for new adopters to launch and operate.

Back in San Francisco, the urban explorers from around the world gathered for a matchmaking summit on day two before going on field trips to marvel at some of San Francisco's most innovative urban solutions on the last day. The innovation workshop tour took visitors to local incubators like TUMML, wework, The Hub, and TechShop. The renewable energy tour included a potential wind power site on Twin Peaks and California’s largest urban solar installation at the Sunset Reservoir.

A third tour led through San Francisco's vast world of people-centered micro projects on public and vacant land. From the roaming food truck extravaganza of Off the Grid and on-street parking spaces converted into parklets to citizen-driven projects like Proxy, a shipping container environment turned retail space, and Hayes Valley Farm, a city-funded and volunteer driven 2.2 acre urban farm on a former freeway ramp, there were plenty of creative solutions to glean.

The lesson we can all take away from this ambitious experiment is that each individual and community holds a part of the solution. All too often these kernels aren't visible until they are thrown into a larger pot where they can find the matching pieces. It's through that exchange that an idea can grow into something larger and travel to where it's most needed. And when a good idea finally reaches its destinations, everybody wins.