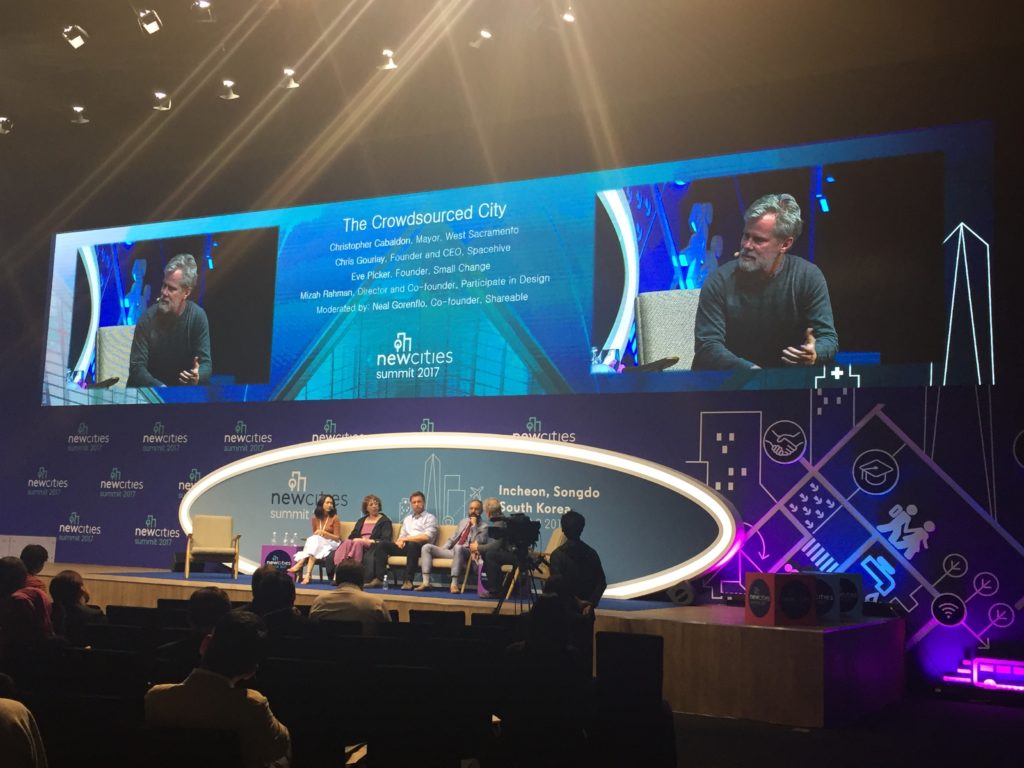 Ten years ago Songdo, South Korea, was underwater. Today, it's a city in Incheon's free economic zone with 20 million square feet of LEED certified buildings — 40 percent of all LEED buildings in South Korea. That's dozens of high rises. In fact, it's a whole city's worth. Songdo is the very definition of a new, master planned city; one in which sustainability and well-being are incorporated from the beginning.

This is what I learned about Songdo from Mayor Yoo Jeong-bok in his kick-off speech at the New Cities Summit held in Incheon Songdo, South Korea, last week. Naturally, Songdo is an ideal place to host a summit about new cities, though there was one thing I couldn't help noticing. There was an eerie lack of people in Songdo, which is a challenge that many new cities face. As another case in point, I met a Belgian businessman in the conference lounge who was building a new city in Kazakhstan on the Chinese border. He said he's building this city for workers at a so-called "dry port" (land-based transportation hub) that is being built to benefit from China's economic expansion plans.

According to him, who I only spoke to briefly, China is pursuing a "one belt, one road" policy meant to link the developed coast of China with its underdeveloped interior by rail and road in order to spur development of the latter and connect with European markets. Apparently, China wants to turn continental Europe and Asia into a single connected market and be the dominant political-economic player on the largest contiguous land mass on the planet. He added that this is part of an agenda that China hopes will result its currency replacing the U.S. dollar as the global reserve currency and the U.S. as the pre-eminent economic power. While his city does not lack ambition, or at least faith in China's ambition, it does lack people like Songdo. Few people want to live in what otherwise is the middle of nowhere.

I can't vouch for his perspective, but this is the strange world of new cities I experienced at the New Cities Summit. I came away understanding that new cities is actually a new global industry. I found this world simultaneously hopeful and scary. The urban population boom arguably necessitates new cities. It also offers the chance to build better cities from the ground up without the limitations of legacy infrastructure, technology, or ideas. One could also argue that these large-scale experiments are critical to developing new urban strategies needed to house humanity sustainably during a century in which billions of people will move to cities.

On the other hand, I wonder about how new cities are built. It seems there's little input by the people who will eventually live in them. The track record is spotty. There are hundreds of nearly empty "ghost cities" in China alone. New cities' role in nations and corporations' ambitious plans do not make them the human-centered urban ventures that late urbanist and activist Jane Jacobs would appreciate. New cities seem to embody her nemesis Robert Moses' top-down, brute-force approach to urban development. This time, however, there's no pesky neighborhood in the way. Most new cities are green field developments.

To the New Cities Foundation's (the conference organizer) credit, the focus of the summit on equity, sustainability, and well being in new cities pervaded the entire conference agenda. Indeed, the conference theme was "Thriving Cities: The Building Blocks of Urban Wellbeing." The conference programming approached this topic from many angles, including directly through the lens of healthcare as well as through transportation, housing, public space, and more. Panelists and speakers did not shy away from voicing their concerns and often radical hopes for new cities. Even the developer I spoke to (from Gale International, Songdo's developer) at lunch on day two appreciated the fact that it's hard to be successful if your projects aren't good for people and planet. Personally, I appreciated the chance to moderate two sessions related to sharing cities — the "Crowdsourced City" and "Shared Cities." There is an opportunity for new city developers to incorporate shared space, assets, and transportation into their plans. For instance, developers should consider designing in affordable cooperative housing, lending libraries, coworking spaces, and fab labs into every new city neighborhood. That would be a good start.

The interest in a city infused with opportunities to reweave the social fabric, increase equity, and reduce consumption through sharing in cities was high. The radical nature of sharing cities was far from the exception among speakers and sessions. It was more the rule, though it was tempered by the pragmatism of the experienced professionals who made up most of the speakers and panelists. All in all, I came to appreciate the event as a useful, necessary, and potentially high impact intervention for the wild west of new cities. In fact, I recommend that more people from civil society go to this annual summit to understand new cities, learn why they are important, and influence this community's agenda so that the benefit of new cities is more broadly shared.