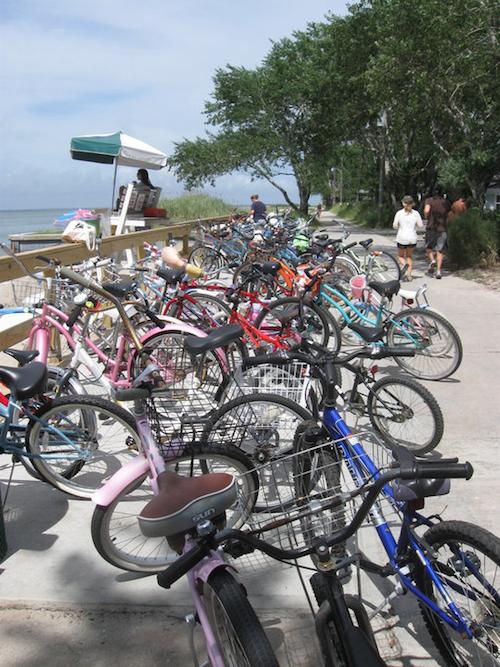 The domination of the American landscape by the car is so complete that it is difficult to envision cities and towns where bicycles form more than a token part of the transportation backdrop. Yet climate change makes such a transition not only necessary but urgent. Cycling advocates and environmentalists often point to European cities like Copenhagen where bicycles are deeply embedded, where everything from the design of streets to the general pace of life is heavily influenced by a bicycling imperative.

But such examples have a hard time resonating with Americans. Maybe we need to look closer to home, to examples in our midst in which cars, for whatever reason, are not king. One such example is Fire Island, a 31-mile island off the coast of Long Island, NY. More than twice as long as Manhattan, it is no more than a quarter mile wide at its widest spot. 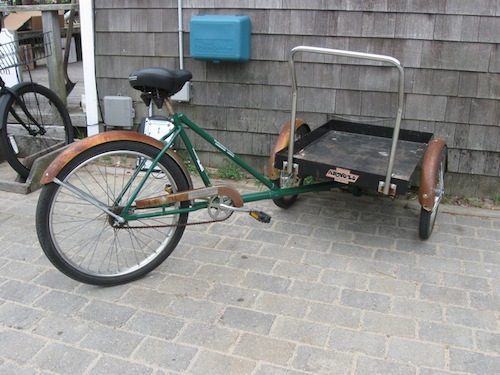 Fire Island is primarily a summer vacation destination, especially for wealthy and upper-middle class folks from New York City. There are almost no paved roads – instead, boardwalks wide enough for two people walking side by side predominate. Cars are generally prohibited, with emergency, phone company, and utility company vehicles being the only exceptions. The island is simply too narrow for cars. This geographic peculiarity set the stage for Fire Island to become something of an ambiguous bicycle mecca.

The absence of cars means that bicycling has become part and parcel of the life and culture of Fire Island. The dozen or so distinct towns and communities are scaled for walkers and bikers, and each can be traversed on foot in no more than 10-15 minutes. People who otherwise would never get on a bicycle readily and happily ride around the island – a fact that becomes obvious when watching how tentative and wobbly many people are on those bikes. 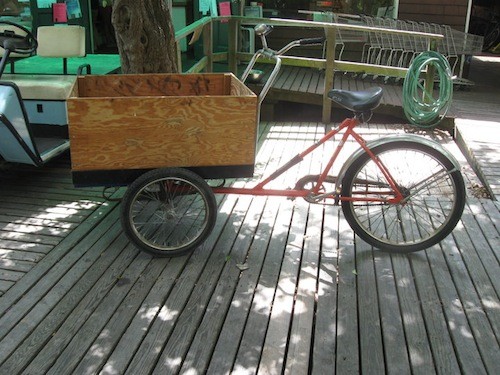 The bikes of choice are generally single-speed heavy-duty utility bikes, built not for speed or flash but for leisurely ambling, often with large baskets. Multi-speed bikes are beside the point here – the island is completely flat, and going fast enough to use more than one gear is generally not an option, due to sharing the “road” with the many people walking on foot.

As a result, Fire Island is home to scenes that are sadly vanishing from the American landscape. Kids ride bikes, with or without a destination, on their own; parents who would never allow their kids to get on a bike in their car-choked urban or suburban neighborhoods or to take a bike ride by themselves are able to let them off the virtual leash a bit, since no cars means that pretty much the entire island is safe for new and learning riders. The few businesses and stores use cargo bikes for hauling and deliveries. Visitors use wagons to transport their luggage and groceries from the ferries to their houses (think old-school Radio Flyers). 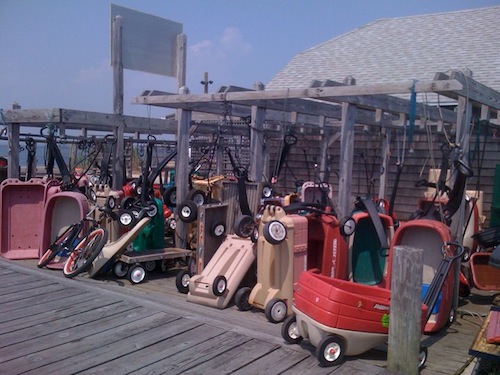 What is surprising about Fire Island is how readily people accept and even embrace this state of affairs. The absence of cars is seen not as a detriment but as a critical part of Fire Island’s laid-back, vacationy atmosphere and charm. Most people would balk at the idea of now introducing cars to Fire Island, even if it were possible.

Does Fire Island offer a model for making other communities car-free, or at least, more bike-friendly? Yes and no.

Let's take the negatives first. For all but a handful of year-round residents (who, incidentally, have permits to drive cars on the beaches in the off-season), Fire Island is a place to visit for short periods. People come here in order to get away – they expect and crave a relaxed pace. Chances are, if most Fire Island vacationers were faced with never being able to have access to a car, they’d object. But when they go home, they are as dependent as any other American on their cars (or cabs, in the case of the New York City dwellers who make up most of Fire Island’s summer residents). 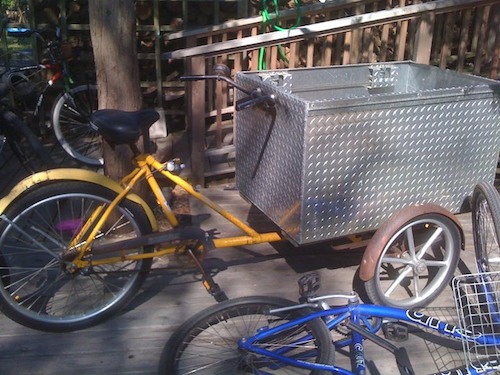 The activities that most people need (or at least think they need) cars for in their everyday lives are generally absent on Fire Island. Here, people aren’t commuting to work, or taking their kids to school. Thus, the absence of cars is no big hassle. And the population of the Island is self-selecting – it attracts those people who enjoy a respite from the tyranny of the automobile, people who are perhaps in the minority. Those who don’t like Fire Island often say “there’s nothing to do there” (part of the attraction for those who love it) and no doubt the inability to get in your car and drive “somewhere” to do (or buy) “something” is part of this.

Despite all this, Fire Island does offer some lessons for how American towns and cities could begin to make a shift of both culture and infrastructure to embrace the bicycle.

One key lesson of Fire Island is a variation on “if you build it, they will come.” Cars are all but a physical impossibility on Fire Island, so the expectation that bicycles are the main or only mode of transport is thoroughly established. This suggests that if we can muster the initial political will to make some infrastructure and design changes to American cities, the expectations that encourage people to give up cars and take up cycling in the city will follow. We already see this principle at work in many cities with beloved parks and pedestrian malls. Once established, these become firmly embedded features and institutions that the citizenry would strenuously resist any attempts to remove. 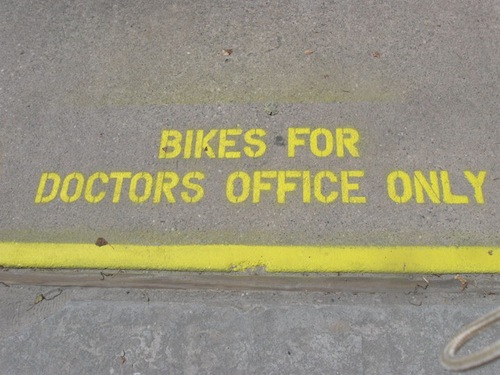 Another lesson is that in a car-free environment, people quickly realize how nice it is to get away from cars, and to not have them determine everything from the design of houses and streets to the quality and quantity of interactions. We see different “car cultures” in different places – in Boston or New York, there is an expectation that drivers will be rude and impatient, and lean on their horns if the driver ahead of them doesn’t take off as soon as the light turns green. By contrast, in many (particularly suburban and rural places), drivers are more patient and polite, willing to drive slower, forgive slight delays, and less likely to honk their horn. Visitors to those towns tend to quickly adapt to the local car culture. So why shouldn’t the same be true for local "bike culture"? Residents and visitors would quickly adapt to a city’s particular approach to cycling.

A final lesson is that the more people get on a bicycle, even once in a rare while, the better. As long as cycling remains the domain of die-hard cycling advocates, bike racers with spandex and the latest high-tech gadgets, and urban hipsters on fixed gears, it will remain an orphaned subculture. Getting a driver out of their car and onto a bicycle helps change their perspective. It makes them more attuned to what it’s like to experience the road as a cyclist rather than a motorist, and thus more likely to support the creation of bike-friendly infrastructure. It breaks up the notion that cycling is weird and not for “regular people.” Each cyclist brings us that much closer to a tipping point where cycling becomes a mainstream, unremarkable, everyday form of transportation and part of our landscape. 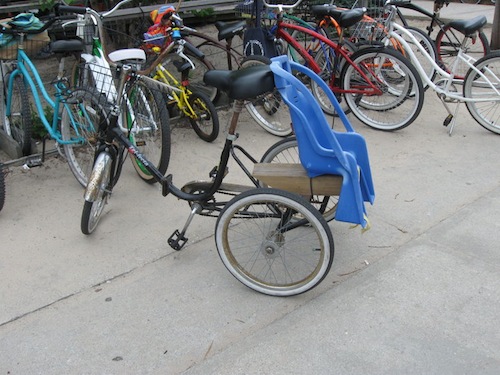 In the end, most American cities and towns will never go car-free like Fire Island. But the island offers a glimpse of what our urban and suburban spaces could look like with a few minor changes, not to dethrone the car completely, but to make it share its pedestal with bikes.

Alex is a lawyer, occasional activist and bicycle commuter

Alex is a lawyer, occasional activist and bicycle commuter