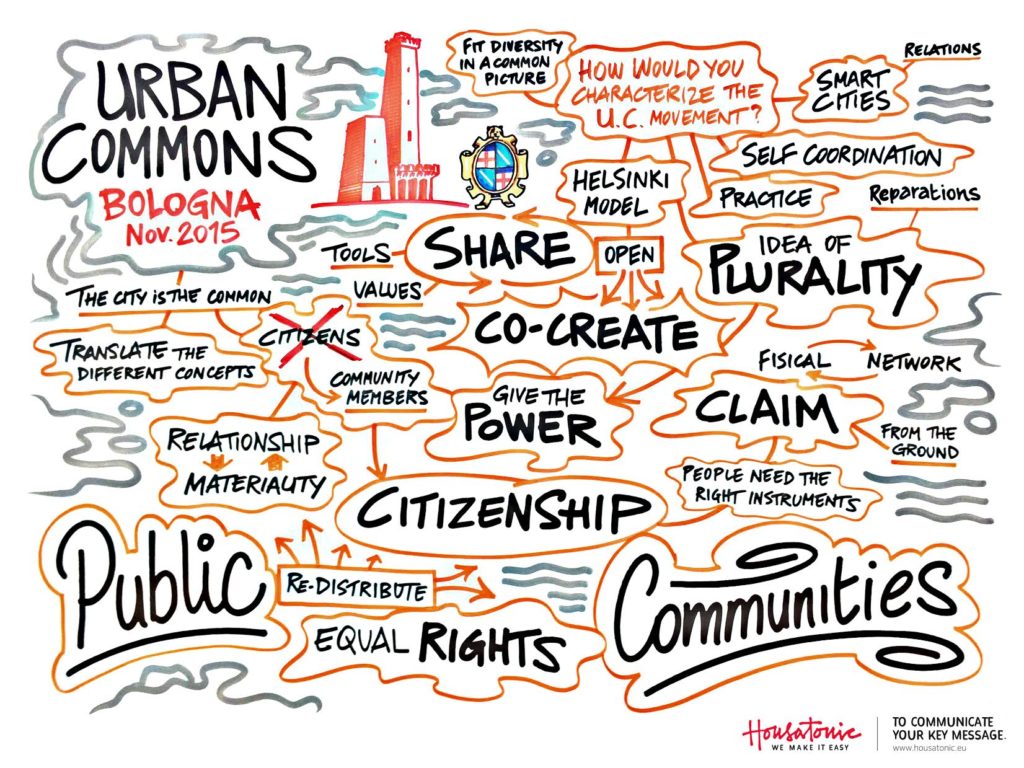 Graphic recording of a recent Shareable-hosted discussion on sharing cities.

Shareable’s new book project and team (see below) aims to help the sharing cities movement get to the next level. The idea for the book emerged directly from Shareable’s work with its Sharing Cities Network. One of the biggest needs expressed by network leaders was greater clarity about what a sharing city is and how to get there. Shareable committed to address this need. The first step was to create a draft book proposal and hand-pick an international team to create the book together.

At first, we intended to create a relatively small team. However, we were overwhelmed with both the number and high quality of the candidates. So, we raised more money and have assembled what we believe to be an impressive braintrust to steward the vision of sharing cities.

While the content of the book will provide a commons-based vision of sharing cities, the project is also structured to provide team members with a valuable learning experience in peer production and self-publishing. In collaboration with many of Shareable’s long standing organizational partners, the team will curate the best sharing city model policies and successful projects for the book, while using cutting edge collaboration and publishing tools to put it all together. The process, and the learning experience for the team, will be as important as the final product.

True to this principle, the team has started with a visioning process to build a more precise understanding of sharing cities and what kind of book (and other media) we will produce. Leading the visioning process is team, design, and collaboration expert Simone Cicero.

Shareable will publish updates, reach out for tips about successful public policies and community projects and ask for your feedback along the way. So, as they say in radio, stay tuned.

Jeffrey Andreoni (Greece): In addition to being a regular contributor to Shareable with articles focussing on digital technology and seeds, Jeffrey writes about a variety of subjects from fine art to adventure travel. In addition he organizes Flash Mobs and social interventions in a variety of locations. (Read Full Bio)

Daniel Araya (USA): Daniel is a researcher and advisor to government with a special interest in education, technological innovation and public policy. He is the author of the book Smart Cities as Democratic Ecologies (2015) and his current research looks at the social impact of technology, particularly ‘intelligence augmentation‘ and the future of work. (Read Full Bio)

Khushboo Balwani (Belgium): Khushboo is a Connector at Ouishare and among other issues, focuses on how to render collaborative economy solutions available to people lacking resources. She is also involved in Sharitories, a Ouishare project that supports local authorities to implement and thrive collaborative economy initiatives and has worked as a freelance Strategic Designer. (Read Full Bio)

Simone Cicero (Italy): Simone is a strategist in love with open culture and the p2p revolution. He blogs about change and society on meedabyte. (Read Full Bio)

Leila Collins (Israel): Leila is living in Jerusalem, Israel where she is working to develop the sharing economy as a path to sustainability in Israeli cities. Before, she was living in Turkey teaching and researching urban sustainability on a Fulbright Scholarship. (Read Full Bio)

Ryan Conway (USA): Ryan is a political economist and community organizer with a passion for the democratic self-organization and ethic of stewardship found frequently in the establishment and endurance of community commons. Ryan’s research and practice focus on establishing collaborative capacity and building resilient community infrastructure, in the midst of social, economic, and environmental crises. (Read Full Bio)

Sharon Ede (Australia): Sharon works to build the sharing and collaborative movement in Adelaide, South Australia. She set up Share Adelaide, a hub for news about local and national sharing activities, is the ‘ideator’ of ShareNSave, an open source initiative of the South Australian government which is a platform that maps community sharing assets, and was part of the organising group which produced the 2015 Adelaide Mini Maker Faire, attended by over 5,000 people. (Read Full Bio)

Neal Gorenflo (USA): Neal is the co-founder of Shareable, an award-winning news, action, connection hub for the sharing transformation. He has learned a lot about sharing through 10 years of intensive sharing entrepreneurship, thought leadership, and practice in daily life. (Read Full Bio)

Ryan Gourley (USA): Ryan is an educator, entrepreneur, and sustainability evangelist who works to bring social innovations to life. He is Founding Director of A2Share, a community organization whose mission is to support and grow the sharing and solidarity economy of the Ann Arbor area. (Read Full Bio)

Kristen Hewitt (USA): Kristen is writer and editor living in western Massachusetts. Her poetry and nonfiction have appeared in Orion, Terrain.org, and the Whitefish Review, and she is currently an MFA candidate in poetry at Warren Wilson College. (Read Full Bio)

Nikolas Kichler (Austria): Nikolas studied architecture in Vienna (AT) and Delft (NL). During his thesis in 2012 he discovered the concept of “Commoning” as an interesting option for city development. Since attending the Commons Summer School in 2013, he got involved with the Commons Institute e.V. in Germany. After working as an architect, he co-initated an urban lab called “vienna.transitionBase”. In 2014 he co-developed a concept called “City of Workshops” in which he outlines a vision of a commons-based society. Currently he works as a researcher at the Vienna University of Technology, exploring ways to widen opportunities for citizens to co-create their cities. (Read Full Bio)

Adrien Labaeye (Germany): Adrien is an action researcher working from Berlin on urban and digital commons. He is a core contributor to TransforMap and co-founder of the transition>>lab. (Read Full Bio)

Tom Llewellyn (USA): Tom is the Organizing Director for Shareable and coordinates sharing campaigns and the international Sharing Cities Network. Previously he was the Education and Activism Director for Sustainable Living Roadshow touring the U.S. producing eco events, leading workshops and participating in a wide variety of actions and campaigns. (Read Full Bio)

M. Andre Primus (USA): Andre is Founder and Director of RocShare, an organization that serves to help encourage the growth of the alternative economy in Rochester, New York. He works in urban planning, activism, and dance, and has a habit of nerding out over a long list of subjects. (Read Full Bio)

Marco Quaglia (Italy): Marco has a Master’s degree in International Relations from LUISS University and is an editor for the Laboratory for the Governance of the Commons (LabGov). (Read Full Bio)

Darren Sharp (Australia): Darren is the Australian editor of Shareable, a sharing economy strategist, and the Melbourne coordinator of the Sharing Cities Network with a background in community engagement, research and consulting. As Director of Social Surplus he works with public sector clients to design programs that amplify the strengths of people and communities through sharing. (Read Full Bio)

Emily Skeehan (Japan): Emily is a marine scientist, advocate and writer, who works to build more resilient communities in the face of social, environmental, and economic changes. Throughout her career, she has been interested in the role marine policy plays in protecting life and conserving natural resources. (Read Full Bio)