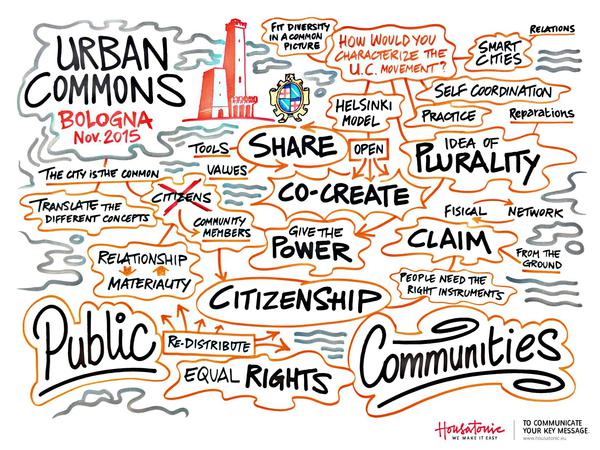 As you may have heard, Shareable has embarked on an adventure in collaborative book publishing. We’re self-publishing a book on sharing cities to be released this October. Naturally, we decided to walk our talk in terms of process. We’re collaborating on everything from the book proposal to licensing (Creative Commons) to distribution. We believe this process will strengthen the sharing cities movement.

The first step after assembling a team of twenty from around the world was to decide the scope of the book. In other words, It was time to develop a book proposal, and do it collaboratively with input from around 50 people. Our team’s collaboration coach, Simone Cicero, designed a process for us based on Nilofer Merchant’s QuEST method from her book, The New How. Shareable's Tom Llewellyn coordinated the process.

Here’s what we did:

Step 1: Identify target readers. We developed a list of people to interview that represents the audience we want to reach. We made sure it was diverse in multiple ways – gender, race, professional background, and geography.

Step 2: Interview target readers. Simone created a survey for everyone to use (one of many spreadsheets he create for us). Book team members signed up to interview two to four people each. We agreed that we should do the interviews face-to-face where possible to get the best possible feedback. Around 30 target readers were interviewed.

Step 3: Collate survey data. All survey data was collated. Similar sentiments were merged into single statements. This resulted in nearly 200 statements on what target readers wanted in the book in terms of framing, content, structure, tone, and design.

Step 6: Synthesize the target reader and vision statement data. Ryan Conway and myself volunteered to do the analysis. We combed through all the data to identify recurring themes about what everyone wanted in the book. This was hard but rewarding work.

Step 7: Develop a draft proposal. Ryan and I drafted a book proposal based on the recurring themes uncovered in step six.

Step 9: Vote on chapters too include. Book team members nominated about 25 chapters on topics ranging from community energy to placemaking. We limited the book to 12 core chapters and used a Google spreadsheet to vote on the topics. There was disagreement about two or three chapters. We settled the disagreement in a majority vote during the above mentioned videoconference.

Step 10: Present the final draft to the team. Wait for any objections. There were none, so we had a finalized book proposal. Phew! You can check out the book proposal here including all the chapters to be included.

Developing a book proposal collaboratively with input from so many people was a tad daunting. It also took about a month longer than we expected and there were some mildly stressful twists and turns. I should also mention that in parallel to this, our book design lead Chiara Camponeschi queried a subset of the book team to develop the book's design guidelines.

If I had to do it over again, I’d do two things:

Despite the challenges, I highly recommend this collaborative book proposal development process. While there were some frustrating moments, we came out of the process with a clear, shared vision of what we want to do together and more collective commitment in the project.

Big thanks goes to all the book team members who stuck with it through uncertainty, delays, long videoconferences, and an unfamiliar process.