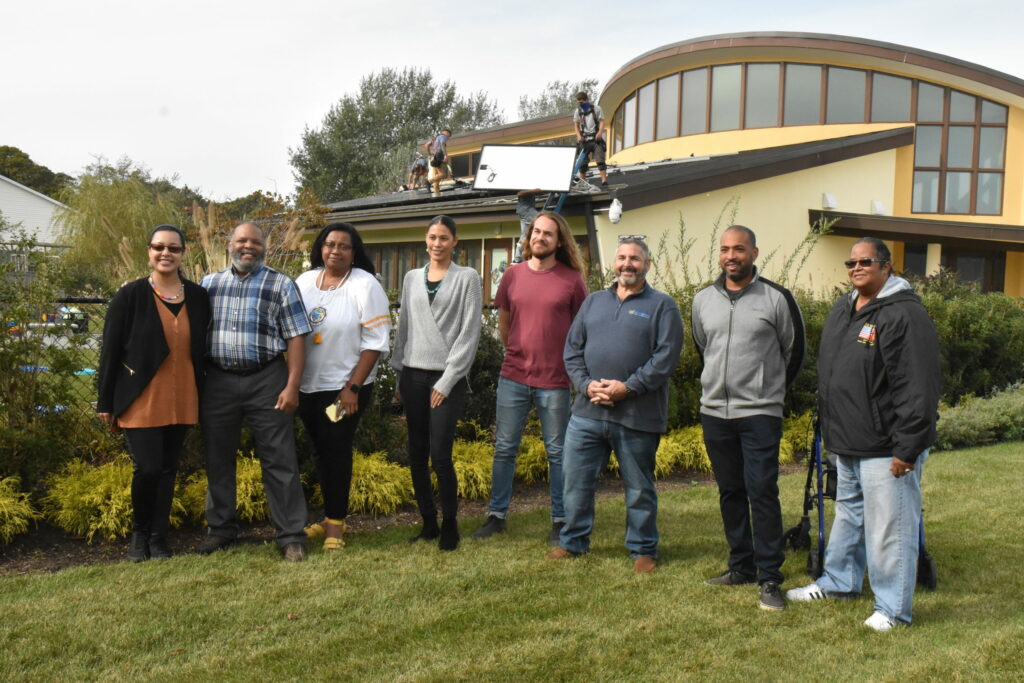 Members of the Shinnecock Indian Nation stand alongside representatives from SUNation and the Long Island Progressive Coalition celebrating the installation of solar panels at the Wuneechanunk Shinnecock Preschool. Credit: Stephen J. Kota

Renewables in the U.S. have become a growing part of the energy sector. Solar capacity, in particular, has grown by nearly 300 percent since 2008, partly due to a nearly 70 percent drop in installation price since 2014. The price and availability of solar now make it well-positioned to expand beyond wealthy, suburban homeowners.

Tribal Nations around the country have started exploring solar energy use and production and developments like the Arrow Canyon Solar Project, on the Moapa Band of Paiutes Indian Reservation in Nevada, are starting to pop up across the West. In the Northeast, however, one solar project on tribal lands could provide a model for future Indigenous solar projects.

According to Scott Maskin, SUNation Solar Systems CEO, Residents Energy already had a relationship with the Shinnecock. Now there was a project SUNation could help with: solar retrofitting the Wuneechanunk Shinnecock Preschool. SUNation, through its non-profit division, SUNation Cares, has a history of donating solar energy systems to different causes and communities.

“We built a company that can give back regularly,” Maskin said. “We typically donate systems to veteran families.”

Working with the Shinnecock people to upgrade a school seemed like an excellent opportunity. The Nation was also on board. Denise Williams, then-Interim Director of the Wuneechanunk Shinnecock Preschool, described the collaboration as aligning with the environmental goals of the Nation.

“We’re always looking for new ways to further our goals of the Shinnecock Nation in restoring back to more holistic, natural ways, and to be more green and lessen our footprint,” she explained.

Additionally, SUNation’s reputation among the Shinnecock made it the best company to optimize the Wuneechanunk Shinnecock Preschool. Williams explained that, “because SUNation owners are very Native-friendly and aware of the Tribal Nation out here in Southampton,” tribal leadership and the larger community was comfortable with SUNation doing the installation.

The installation process — ultimately culminating in the operation of a 12.29-kilowatt system — began with paperwork. According to Williams, a project like this (despite only affecting the preschool) had to go through multiple offices throughout the Nation. Additionally, despite energy for the school coming from its solar panels, billing would still go through the Nation’s electric utility, PSEG. That process partly required tracking down old electric bills for the school.

With the pre-construction logistics sorted, SUNation conducted site visits at the preschool. These visits would be to determine how the solar panels would be installed and oriented. One concern from the Shinnecock, however, was the aesthetic of the panel array.

“Solar can be ugly,” Williams explained. “We have this beautiful modern building that is shaped like a turtle, because that’s historically relevant to us, so anything that anybody is going to do that involves the structure I take into consideration.”

Pleased with the ultimate layout of the solar array, the Wuneechanunk Shinnecock Preschool is now poised to realize some of the energy savings.

At the beginning of 2021, right before the solar panel array was operational, electric bills were about $2,000 per month. With a fully operational solar panel system, prices for the beginning of 2022 have dropped to just over $300. The energy savings were more of a positive externality than a direct goal for the community, however. Williams noted that the “cost difference is beneficial, but that wasn’t the motivating factor.” In fact, Williams highlighted that retrofitting the Wuneechanunk Shinnecock Preschool was actually meant to seed other renewable developments for the Nation. One such idea is providing solar energy storage systems that would be the foundation for recharging stations for electric vehicles and even electric generators.

Although there is a growing appetite for solar, distributing solar more broadly across the Shinnecock Nation is not a streamlined process. Because energy retrofits of this nature can affect tribal offices ranging from housing to procurement to education, the approval process can be slow as each office needs to sign-off on the project. This means that projects like this often have unanimous support across the Nation, but can be time-consuming to execute. For example, SUNation Solar proposed a renewable energy retrofit for the signs along Sunrise Highway, but that project has yet to materialize. Though even with just solar operating on the preschool, broader positive impacts on the community can be seen.

The location of the Wuneechanunk Shinnecock Preschool, directly across from the Indian Education Center and the Boys and Girls Club, could make the preschool a de facto center for solar technical education. According to Williams, the Nation is “always looking for vocational opportunities.” Fortunately, SUNation has expressed interest in providing apprenticeships and internships for young people interested in the solar industry. Not only does this eventually give the Shinnecock Nation more agency in how its energy is distributed, it also demonstrates that SUNation is the kind of partner the Nation would like to keep.

Williams asks, “If you’re coming here, and you’re non-Native, what are you bringing to teach our community so you leave us stronger?”

This framework for vetting good outside partners is one that Williams would recommend to other Tribal Nations interested in building out their solar infrastructure. She also recommends looking into solar incentives from either state or federal entities. Maskin also believes that solar incentives would make these projects more viable. He did, however, lament diminishing federal and state support for the burgeoning solar industry. While New York State provides a $5,000 residential solar tax credit, commercial tax incentives only exist at the federal level. Tax credit increases are something SUNation would love to see, as they would have benefits for the industry and consumers — like the Shinnecock.

“We’d like tax credits to increase or at least stay the same,” he explained. “There’s incredible benefits, not just to the environment.”

More tax credits not only make solar more affordable to consumers, but Maskin also sees it as a path toward more energy autonomy.

Even if it just starts with a preschool, the energy choice that Shinnecock Nation now has allows them to define a more diverse energy future.

Chad Small is a New York City based freelance reporter who principally covers community-led and policy-driven solutions to the climate crisis, as well as the economic, social, and public health

Chad Small is a New York City based freelance reporter who principally covers community-led and policy-driven solutions to the climate crisis, as well as the economic, social, and public health effects of Environmental Racism. His work has appeared in Grist, Gothamist, Reasons To Be Cheerful, and other publications. He is a Data Fellow at Grist, and a former New Economies Reporting Project‘s Finance Solutions Fellows with the New Economy Coalition. Follow Chad on Twitter to see more of his work.