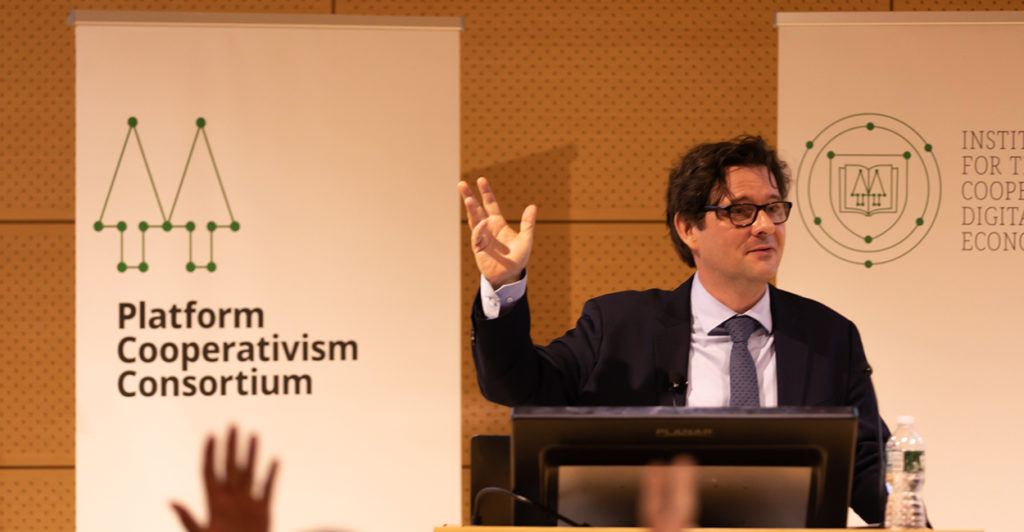 Despite growing awareness that the current platform economy — dominated by companies like Uber, Facebook, Amazon and Doordash — is exploiting workers and users, alongside the emergence of some platform cooperative successes like Stocksy, Up & Go, and Resonate, platform cooperatives remain mostly an idea. Today, most users around the world still cannot easily use a platform cooperative alternative for any service they rely on.

That could soon change.

New entities are creating toolkits and models for start-up platform cooperatives to more easily tackle the existing legal, financial and technical barriers to entry in the digital economy. One of the first was Platform Cooperative Consortium, founded in November 2016, which counts 17 members in its circle of cooperatives, and now has affiliates in six countries around the world.

More recently, the brand new Institute for the Cooperative Digital Economy (ICDE), launched this past May at the New School in New York City, where the first Platform Cooperativism Conference was held in 2015. The ICDE is focused on creating actionable research and knowledge, examining digital businesses and projects that are owned and governed by workers and users.

Firstly, tell me – what led to the founding of the ICDE? What gaps does it aim to fill, and how will it connect with Platform Cooperativism Consortium (PCC)?

Trebor Scholz- The Institute is the research arm of the PCC. We founded the Consortium a few years ago in response to people approaching us on a daily basis requesting our support, advice, policy analysis, seeking partners for collaboration on research projects. We simply couldn’t respond to all of these requests; there had to be a more collective response.

We helped people in the movement find others, and we did a lot of advocacy to introduce people around the world to this ecosystem. But we quickly realized that there is a need for research — research that formulates, builds and explores new visions for what a cooperative future of work could look like. And we need research that is unafraid to take a starting position which states that today’s digital economy is unfair to workers, but that together with other movements we can build a fairer future. Instead of examining the latest apps coming out of Silicon Valley, let’s visit Detroit, Barcelona, Ahmedabad, Zurich and Bendigo to research experiments in self-sufficiency and democratic enterprise for clues about what might scale.

What is the Institute doing for the wider platform cooperative movement in a tangible way?

We are starting with four priorities. First, there is our Research Fellowship Program. The fellows are working on reports, which they’ll present in November at our conference. We will also start publishing a series on Public Seminar. We will have a vertical for that on our site, where we’ll will publish in groups of short accessible pieces on particular topics that are relevant to the community.

We also will be starting to work with ICDE-affiliated faculty at The New School. We’ll start affiliating New School students in the fall as well, and in the spring of 2020, I’ll be teaching a course on platform cooperativism.

Beyond that, there are many other projects but at this point we will limit ourselves to these activities. Unsurprisingly, the scope of our research hinges on the funds that we’ll be able to raise.

Besides research, how will the Center produce something tangible for cooperative practitioners?

In our statement of purpose, we are very clear that we’ll focus on producing knowledge that will be helpful to people in the movement. The idea is to have accessible material that can then be circulated and used.

There are some really urgent needs. For example, figuring out an investment fund for platform cooperatives, which is so sorely needed. One of our fellows is thinking this through for her report. That will be another of our areas of focus.

In general, the platform cooperative movement has some fundamental challenges – like how to raise capital and how to scale; how will the ICDE play a role in addressing those challenges?

Economically, platform cooperatives are quite marginal still. There are some groups that have moderate success, like Stocksy and Smart, but many are struggling — and obviously start-up capital is the main challenge.

So while there’s a lot of energy, and many many groups around the world are starting to work on this and commit themselves, and culturally the concept is definitely succeeding, economically we will have to see.

Think about the history of Mondragon. It started in 1941 with a technical college where the Jesuit Priest José María Arizmendiarrieta, the founder, introduced ideas of cooperation, humanism and solidarity to people in Mondragón, Spain. More than a decade later they started the first cooperatives. It takes time.

Has the growing awareness of platform ownership and privacy allowed for more discussion of cooperative alternatives?

It has definitely become much more mainstream. Data breaches, privacy violations, and the public awareness of the concentration of platform ownership, is so much clearer now. Also, the antitrust discussion has really taken several steps forward, so maybe there is some hope that the likes of Facebook or others will split up, and one of those companies will become a cooperative.

There are much more concrete talks about conversions as well. Here in New York, there’s Juno, a tertiary app-based company owned by Gett. Gett is trying to sell it, and now there are drivers thinking about purchasing it and turning it into a co-op. Things are becoming much more within reach.

The PCC has just launched a new website that aims to be a hub for knowledge and resources on platform cooperativism around the world. You can also get monthly updates through their mailing list here. This interview has been edited for length and clarity.