Mondragon Corporation: A Manufacturer of Equality - Shareable
Skip to content 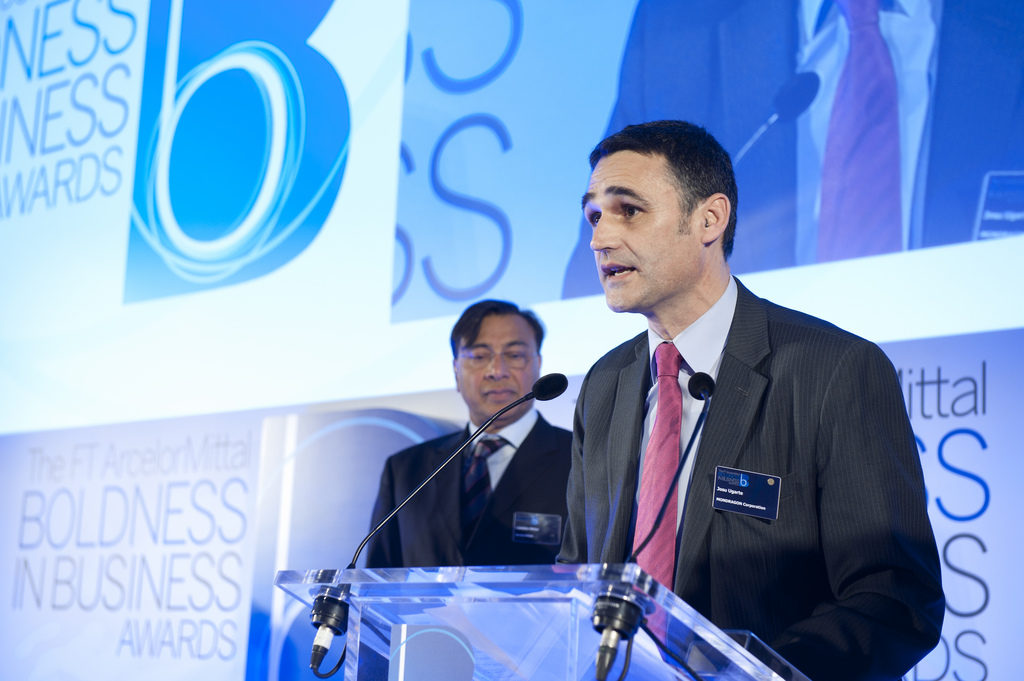 Those “social norms,” cheerleaders for our current corporate order insist, simply reflect economic reality. In a globalized world where corporations tally sales and profits in the many billions, their argument goes, no modern major business could possibly survive — let alone thrive — without shelling out top executive pay that stretches into the many millions.

The owners of one of the largest businesses in Spain would beg to disagree.

Their nearly 60-year-old enterprise — named Mondragon for the Basque town in northern Spain that gave it birth — has nearly 75,000 employees working in everything from heavy industry and retail to banking and education. A big-league business, in other words, by any metric.

Yet Mondragon doesn’t shell out millions to any of its top executives. No executive at Mondragon makes anything close to even a single million.

How could that be? Mondragon just happens to operate as a cooperative and may be, many analysts believe, the world’s most significant worker-owned business.

Josu Ugarte, the president of Mondragon International, spent a chunk of last month touring the United States, as part of the co-op’s ongoing outreach to people and groups looking for alternatives to corporate business as usual. What alternative for corporate compensation does Mondragon offer? Too Much editor Sam Pizzigati caught up with Ugarte in Washington, D.C. and explored that question with him.

How long have you been with Mondragon?

I’ve worked at Mondragon for 27 years ago, and I’ve been the president of Mondragon International, our global operation, for seven years.

How are manager-worker pay differentials determined within the various Mondragon cooperative enterprises?

We have limits in all our co-ops. No manager within any co-op can make more than six times the salary of any worker in the co-op. We have another limit between co-ops, with the maximum difference between one co-op’s compensation and another’s at 38 percent.

Yes, the maximum difference could be 38 percent. But the maximum pay differential inside any individual co-op can be no more than one to six.

The lowest-paid Mondragon associate in Spain is making about what?

Why do you all in Mondragon pay attention to the gap between top and bottom compensation?

Because at Mondragon we are the owners. Every associate is an owner of the company, and we consider a maximum acceptable pay difference one of our solidarity tools.

And why is solidarity important? Here in the United States, no executives at General Motors or Microsoft would say that their enterprises value solidarity. Why does solidarity matter to you?

We are a cooperative. We are different. For us, people are our most important asset.

One of our most important newspapers in Spain, El Pais, just calculated the CEO-worker pay differential at the Spanish corporations listed in the IBEX 35, our stock market index. The difference between the highest and the lowest pay at these Spanish corporations averages 105 times. In our case, just six times.

The latest figures place the differential at top U.S. companies at 374 to one.

Inside Mondragon, we give a lot of training for our people, and, unlike other companies, our hierarchical structure is very flat. We also keep information within Mondragon very transparent. All associates can access basic financial information about the company — because we are the owners.

In this environment, we get all our executives from inside. We promote from within. We have more than 100 Mondragon cooperative companies and over 240 associated entities, so we have a lot of opportunities in different companies to promote. 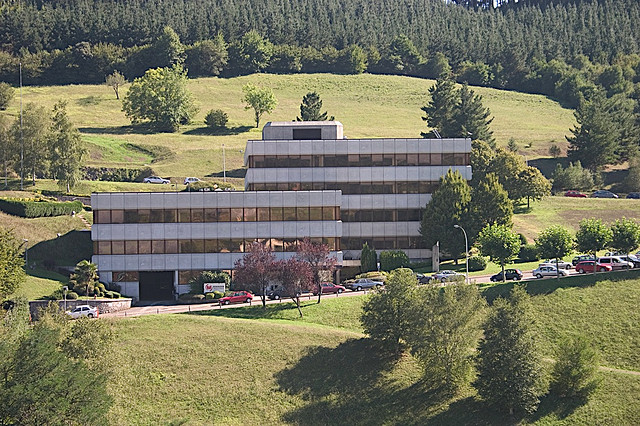 People will go from one Mondragon enterprise to another?

We have many people moving inside Mondragon. I’ve moved between different companies. This helps managers at Mondragon understand our different sectors, from automotive and capital goods to construction and services and so on.

Defenders of the current corporate order in the United States like to claim that you can’t effectively run a major modern business enterprise without paying top executives great gobs of compensation. At Mondragon, you clearly disagree.

We are not losing out for managerial talent because of our pay limits. For us, it is difficult to understand huge pay differences.

So the question is how much is enough? And this question becomes very locally relative, especially when you feel that the values and the solidarity of your organization give you a kind of wealth that doesn’t express itself in money.

What sort of wealth?

We want to transform our society. We want to have a more equal society. Researchers have a measure for inequality, the Gini Index. The higher the value between 0 and 1, the more unequal the society. The USA’s Gini sits around 0.5. Norway, the most equal society by the Gini Index, is at 0.22. Here in the Basque country, the base of Mondragon, we are at 0.24. So we are near the best society in terms of equality, and for us that is really important.

Mondragon operates within a globalized world economy. What would happen if executives within Mondragon started arguing that your enterprise could no longer be globally competitive with a one-to-six pay gap?

To modify the gap would take a vote in the General Assembly, our cooperative’s congress. So it would not be easy to have the congress of Mondragon approving this kind of modification. This is an important issue. To make any change would require one and a half to two years of discussion.

But we think we are already globally competitive. We are following what we call a “multilocalization” strategy. We don’t “delocalize.” To delocalize is to take an asset from one country to another country, destroying employment in the origin country. We are not doing that.

We do invest abroad, especially in emerging markets. We have, for example, 18 factories in China. We have 122 factories abroad. Our companies that invest abroad, they increase their sales, they add value and employment at home.

In the factories that you run abroad, how do you handle compensation?

For the worker salaries, we pay higher than the local society norm. We always pay higher than the prevailing wage. And we offer for our companies abroad the possibility of organizing as a cooperative, but they haven’t wanted to choose that option yet.

No, I think because to become a cooperativist, you need to make some tough decisions in tough times that may involve cutting the salaries or increasing the hours of fellow workers, including your own, when times demand it. In the co-ops of Mondragon, if we are losing money, we decrease our salaries, our anticipation of results.

And the salaries are reduced by your one-to-six ratio?

Yes, we always maintain this ratio.

So if there is sacrifice, people at the top make sacrifices, as well?

Yes, we want to be in for the long-term. We are all owners. As cooperativists, we all have capital, equity, in our company. This equity starts now with 15,000 euros we each put into the company to become an associate. The company allows you to pay this 15,000 over 24 months, taking out a little bit from each salary paycheck.

This equity grows over time, as our enterprises within Mondragon have profits. So we have, in effect, three kinds of income at Mondragon: our salaries, the growth in our equity in the company, and the interest Mondragon pays on that equity.

When you look ahead five or 10 years, where do you hope Mondragon will be? What do you hope to accomplish over that period?

I imagine Mondragon will be more international. I see Mondragon in a new complexity, where we’re trying to integrate people that we have abroad into our cooperative philosophy. That’s quite complicated because every culture is completely different.

But I think that all people want to participate. People want to have a lot of information about their company, about their future. So when we are going abroad, we bring with us our management model. When we are able to get that adopted universally, I think we will be stronger in the world and stronger at home.

Sam Pizzigati edits Too Much, the Institute for Policy Studies online monthly on excess and inequality. His latest book: The Rich Don’t Always Win: The Forgotten Triumph over Plutocracy that Created the American Middle Class (Seven Stories Press).

Each and every month, Too Much explores excess and inequality, in the United States and throughout the world. We cover a wide swatch of territory, everything from the latest executive pay outrage

Each and every month, Too Much explores excess and inequality, in the United States and throughout the world. We cover a wide swatch of territory, everything from the latest executive pay outrage to the most current research insights on how staggering income and wealth divides are impacting our health and our happiness.

A project of the Program on Inequality and the Common Good of the Washington, D.C.-based Institute for Policy Studies, Too Much began publication in 1995 as a print quarterly, became an online weekly nine years later, and now appears monthly.

Too Much, ever since its inception, has been edited by labor journalist Sam Pizzigati, the author, most recently, of The Rich Don’t Always Win: The Forgotten Triumph over Plutocracy that Created the American Middle Class, 1900-1970 (Seven Stories Press).