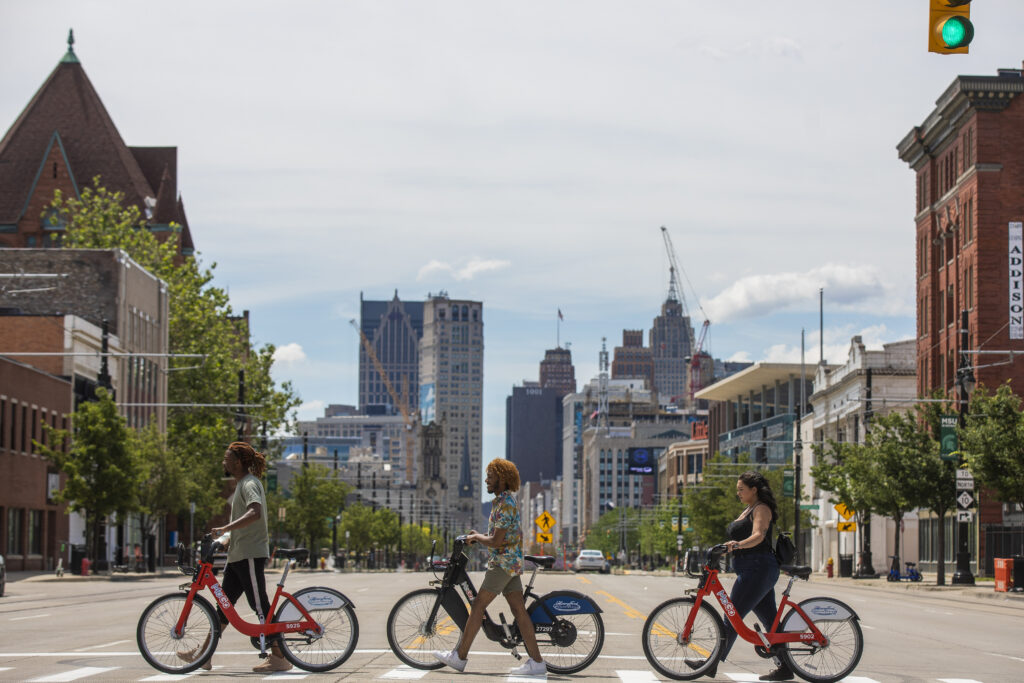 The city of Detroit provides a system of transit services for its citizens and visitors, including buses, street cars, and even an automated rail system.

With only buses as a public option, city-wide transportation remains a challenge for members of Detroit’s 66,000 carless households. Even with its various options, DDOT’s services are not seen as the most reliable, and service closures due to the pandemic haven’t helped.

“Biking is a cheaper, more reliable transit option in most cases,” he says. “Some of the biggest complaints here in Detroit about using other forms of transit are ‘will they show up’ or ‘are they going to get here on time.’ The bike share model offers a bike at all times. There are always going to be bikes at our stations. Our riders depend on that.”

Although “transportation equity” — ensuring that all people have access to these bikes — is part of MoGo’s mission, Thornton said he has encountered some hesitation among typically disenfranchised communities.

That’s because new services or amenities in low-income neighborhoods, where many of those 66,000 carless households are located, are seen as precursors to gentrification and displacement.

He says Mogo is using creative promotions, partnership, and education as ways to reverse suspicion and distrust of bike sharing services often seen as a “white man’s convenience.”

Thornton addressed this and other bike sharing issues and opportunities in the below interview, which has been edited for length and clarity.

Shareable:  MoGo collaborated with Nathan McNeil to conduct the “Breaking Barriers to Bike Share” study, which found that people of color or from impoverished neighborhoods may have been less likely to embrace bike share as a transit option because of a perception issue. They did not want to seem too poor to afford a car, or they saw biking as purely recreational. How did you change their mindsets?

In Detroit we had the first paved roads in the U.S., but what people don’t know is that those roads were actually made for bikes, not for cars. Detroit was a bike city in the 1800s before it was a motor city. In the past five to ten years, we’ve been returning to biking as something more than recreation. That’s very lofty thinking and when you go to the “hood” where people have been using bikes as transportation for decades. There is a belief that if you are using a bike, it’s because you can’t afford a car. So, owning a car, over a bike, is a status thing despite the fact that you have people living in darn-near huts but driving Cadillac Escalades.

Part of what will help people change that dynamic is our focus on the health benefits of riding a bike. It’s exercise. In dealing with a predominantly African American community, where most folks suffer from high blood pressure, diabetes, or obesity — there are a lot of health issues we face. If they get on a bike, period, then that is a win. We’re trying to convince people that if you work within three to five miles from where you live, a better, healthier option for you will be to ride a bike or a MoGo to work and back. We also talk to residents and invite them to do bike rides. Before we expand into an area, we hold community meetings to acquaint them with MoGo and to get their input on where stations should go. It’s one of those things where the more you activate in a neighborhood and the more your presence is prevalent, the more you see suspicion ease and people buying into biking as a transit alternative.

Shareable: MoGo has some creative ways of marketing its services to synergize its impact and benefits. Can you elaborate?

MoGo’s main objective is to provide equitable and accessible transportation to folks in Detroit and the region. We launched in May 2017 with our access pass, which is a big piece of the equity and access piece. The access pass is an annual pass that allows the users to have access to the bikes 24-7, 365 days of the year. It’s hugely discounted. It’s $5 a year if you receive state benefits. This pass is normally $90 and is discounted $85.

We really didn’t want the price for bike share to be a barrier for anyone who needed transportation or even just to run errands or to get to school, especially in a city like Detroit where so many people don’t have access to cars or maybe cannot afford some of the other forms of transportation.

We also use classes, riders’ perks, and partnerships to help riders experience MoGo benefits. Our street skills class really is essentially where we teach people how to ride a bike in urban environments. One is called “Biking 101.” We have people who don’t know how to ride a bike, and by the time they complete the class, they do. It’s been truly transformative for some of the people who have come there. The other one is “Confident City Cycling.” This class is for people who already know how to ride a bike but don’t feel as confident riding a bike in traffic or in urban environments. They learn hand signals or the right way to merge. Those two classes, especially where it relates to communities of color, are important. Detroit is a car city, so those two things really do make a difference for folks, making that jump from biking as purely recreational to biking as transit.

MoGo’s rider perks program is another way to get community members engaged. MoGo partners with local businesses who offer MoGo riders a discount on certain products and services. Anecdotally, local business owners have mentioned an increase in people, who were MoGo riders, coming through the door and using the perk. It’s been a good system so far.

In addition to Henry Ford Health System, HAP (Health Alliance Plan), and local business owners, we have a great partnership with Wayne State University where they are giving many of the students and faculty MoGo passes. This is designed to help students get around campus but also to and from the university.

As a result of “Living Lab” grant from the Better Bike Share Partnership, MoGo has a two-and-a-half-year grant to explore how we can create a system where traditional and bike transit systems are all connected, so that if riders get bus passes, then they can essentially use MoGo as well and vice-versa.  We just began exploring this year. We are preparing to do surveys to see what some of the barriers are for getting off a bike and onto a bus and vice versa. In 2018, we did a pilot where a rider purchasing a bi-weekly or monthly transit pass also received a monthly pass from MoGo. We wanted to encourage people to get off the bus and onto a bike for that last mile connection. But right now, there is no direct connection between MoGo and city transit services.

Shareable: What challenges remain for getting Detroit to choose biking over cars, and why is that a priority?

The biggest challenge is the continued fascination with the car and the car-centric infrastructure. Having a car is still looked at as a status symbol, while biking is viewed as recreational, or worse, looked at as what you have to use because you can’t afford a car. If we can create a paradigm shift in how biking is viewed, like focusing on health or the environment, we’ll start to see a true shift. As a bike share system, MoGo can help create that shift.

Check out this related article: