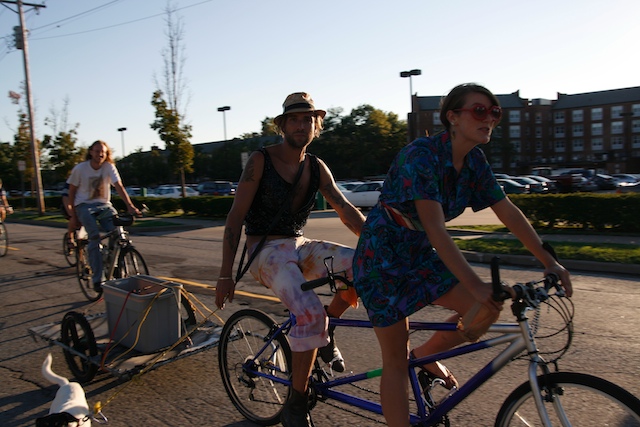 It is a paradox of our times that, no matter how many resources we consume, we never seem to have enough – we always are in a condition of perceived scarcity. Such perennial scarcity is very profitable for companies selling what we think we need. In order to keep these profits high, a variety of “scarcity-generating institutions” manipulate supply and demand and thereby keep “the economy” going at the cost of individual freedom, social equity, and environmental sustainability (for more on this, see the following piece in shareable, as well as my book). Prominent among these scarcity-generating institutions is the complex of urban and transportation planning, advertising, the real-estate market and other economic and cultural institutions geared to keep us hooked to the car, the most resource-consuming and expensive mode of daily transport in existence. After going on a group bike ride about town to celebrate World Car Free Day, workshop participants met at the Kirksville Permaculture Education Center to explore how we can reduce our addiction to cars and thus generate abundance in the Kirksville, Missouri context.

What is “scarce” about the car-dominated transportation system? First, when cities are sprawled, traffic is hazardous, routes for walking and cycling are unpleasant or worse, and we are consequently constrained in our choices, we are pushed to use the car rather than other forms of mobility. This represents a curtailment of freedom of choice. Second, transportation by private car is expensive – Americans on average spend 18 percent of their hard-earned income on transport (most of it on car transport), in contrast to, for example, the Dutch, who cycle much more and spend only 10 percent of their income on transport (for houshold expenditures in the EU, see p. 24 of a 2005 Eurostat report). Third, lots of people are unable to use the car – due to expense, or because they are too young (can’t have a license yet), or too old or ill (their reflexes are no longer fast enough to drive safely), or handicapped (e.g., blind people) – meaning that even in the richest countries, a large section of the population is not served by the car. Fourth, cars cause all kinds of environmental problems, including local air pollution and a large share of global warming.

An “abundant” mobility system provides options for everybody, and promotes the cheapest, most resource conserving, and least environmentally destructive modes of movement, especially walking, cycling, and public transport. The question is, how can we help bring that about? To discuss this in the context of Kirksville, workshop participants formed four working groups:

1. Transportation for the disenfranchised

These working groups were charged with discussing the following topics:

1. In which ways do the conditions in Kirksville already support abundant mobility in this respect (enabling people to get where they need to go, without consuming excessive resources)?

2. In which ways are the current conditions in Kirksville dominated by scarcity-generating institutions in this aspect of mobility (constraining choices in favor of transport by car)?

3. How could this aspect of mobility in Kirksville be made more abundant – either by doing things such as those listed under point one more effectively, or by finding ways of getting around the constraints listed under point two? 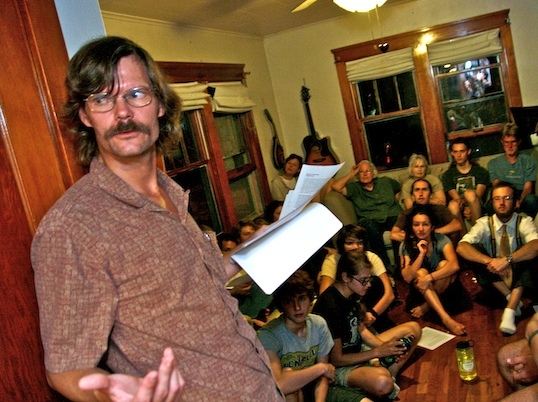 Kirksville already supports abundant mobility with its Disabled American Veterans Transport, the OATS/Kirk-Tran system of transport within town and to Columbia, taxis, school buses, ambulances, trips to Wal-Mart organized for international university students, and rideshare groups on Facebook, Truview, Craigslist and via fliers (none of which are well advertised). Kirksville is a town where many facilities are concentrated in or near downtown and can be reached walking by many residents – to check the walkability of your own neighborhood, check the walkscore website! Bicycles are available as a cheap mode of transport. Some people use lawn mowers as transport (no license required), and some use horse-drawn carriages (e.g., the Amish).

Choices of transport are constrained, however, because major grocery stores (Hy-Vee, Wal-Mart) are separated from most residential areas by Hwy 63, which is not walkable or bikeable. There is a stigma attached to non-car-owners. Some of the roads are narrow and without bike lanes, yet have fast-moving traffic, discouraging use by cyclists. Truman State University has been increasing its parking spaces for students, faculty, and staff, encouraging the increased use of cars.

To provide more options for the poor and handicapped, it would be appropriate to conduct a survey in order to learn more about their needs. Various new services could be provided using existing or new resources.  These could include: 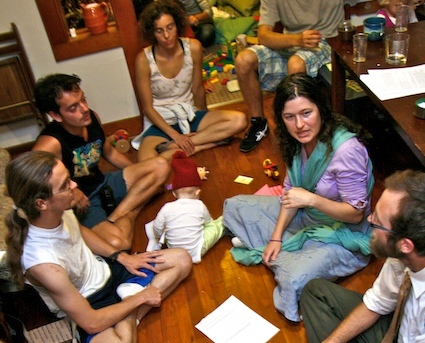 Kirksville already supports mobility by bicycling by virtue of being sufficiently small that one can get everywhere easily, having a street grid without cul-de-sacs or other features that force detours on cyclists, and by providing bike lanes along some streets. There are plans to add a bike trail to Thousand Hills State Park. Drivers are generally knowledgeable about how to pass a cyclist.

On the other hand, many parents fear about their kids’ safety if they go out cycling. Some of this fear may be in response to the fact that some streets and highways have narrow or non-existent shoulders, or are poorly maintained, increasing risks for cyclists. Where infrastructure improvements are needed, some property owners are unwilling to grant easements to help make them possible. Finally, many people depend on Wal-Mart to buy things, and are deterred from cycling there because of the distance (and because the main way to get there is along Highway 63).

Suggestions for improvement included the following: 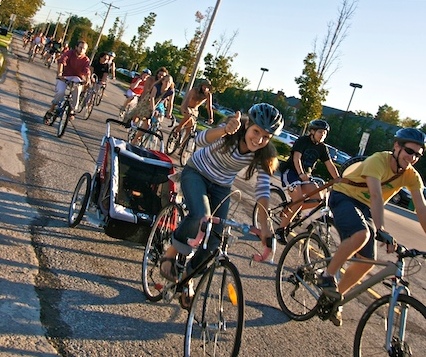 To travel to other cities from Kirksville without a car, there are a few options. OATS/Kirktran buses provide services to Columbia twice a week, there is Amtrak service from La Plate (once daily in each direction, Chicago or Kansas City) and from Quincy, Mo-X shuttles provide service to St. Louis and Kansas City airports from Columbia. Locals are friendly to hitch-hikers (several workshop participants have had good experiences hitch-hiking). One can ride-share via Facebook, Truman.edu rideshare, and Craig’s list (see links under the first working group). Highway 63 has a wide shoulder on which cyclists can bike; rural roads also allow cycling in/through the countryside. Finally, one can rent a car.

However, these options are rather limited. there is no true public transportation with services from Kirksville. To improve its services, OATS/Kirktran would have to offer daily services, on more routes, and publicize its services much more. There are no bike racks on its buses. There are no long-distance buses stopping here, and no light rail. The Amtrak station in La Plata does not allow any checked baggage.

In order to make these services more attractive, the group made the following suggestions:

Kirksville has an abundance of cars, which are unused for most of the day, or are not used to full capacity when they are in use (as when only one or two persons are using a car). As indicated by the first working group, there are some ride-share systems in use, but they reach a rather small number of people. The question is how to expand the use of such alternatives. Next to lack of knowledge about their existence, another major barrier is fear and lack of trust about either the person getting a ride/using one’s car, or about the person offering a ride.

During the discussion at the end of the workshop, organized hitch-hiking and a pedicab system generated a lot of enthusiasm. Several people felt that there would easily be enough volunteers to run a pedicab system. Some talked about their positive experiences hitchhiking (see also this post from San Francisco). There was some discussion about OATS/Kirktran, which is rather poorly known and understood even among many of the workshop participants, and about the extent of its rural routes. Todd Kuhns provided information about this, as well as about some of the other issues the City of Kirksville faces. The workshop showed that there are a lot of possibilities to promote more abundant mobility in Kirksville – but to do it, individuals, organizations, businesses, and local government will have to work together!

photos courtesy of the author