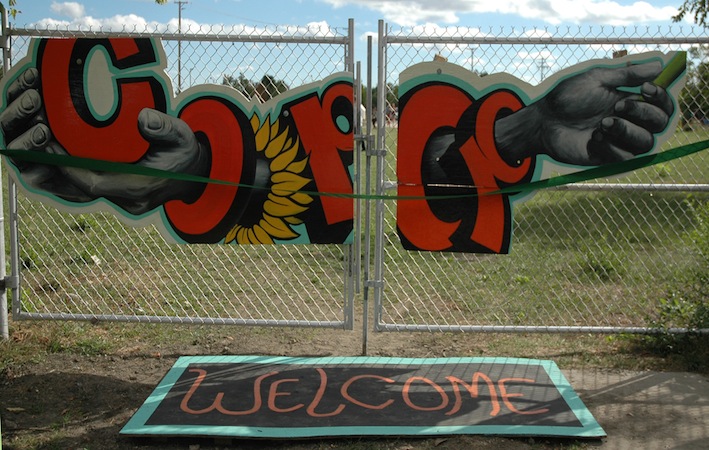 “Communication, collaboration, cooperation—those are skills, not just words,” said Salim Al-Nurridinn, founder of the Healthcare Consortium of Illinois, while standing at the gate of the Cooperation Operation (Coop Op). As the sun slowly began to set on Chicago’s South Side, more than 100 people were gathered in front of a fence surrounding a brand new community garden. “You can’t have community without cooperation,” he continued. “Everybody here should be proud of this day.” Al-Nurridinn then cut the green ribbon at the gate. 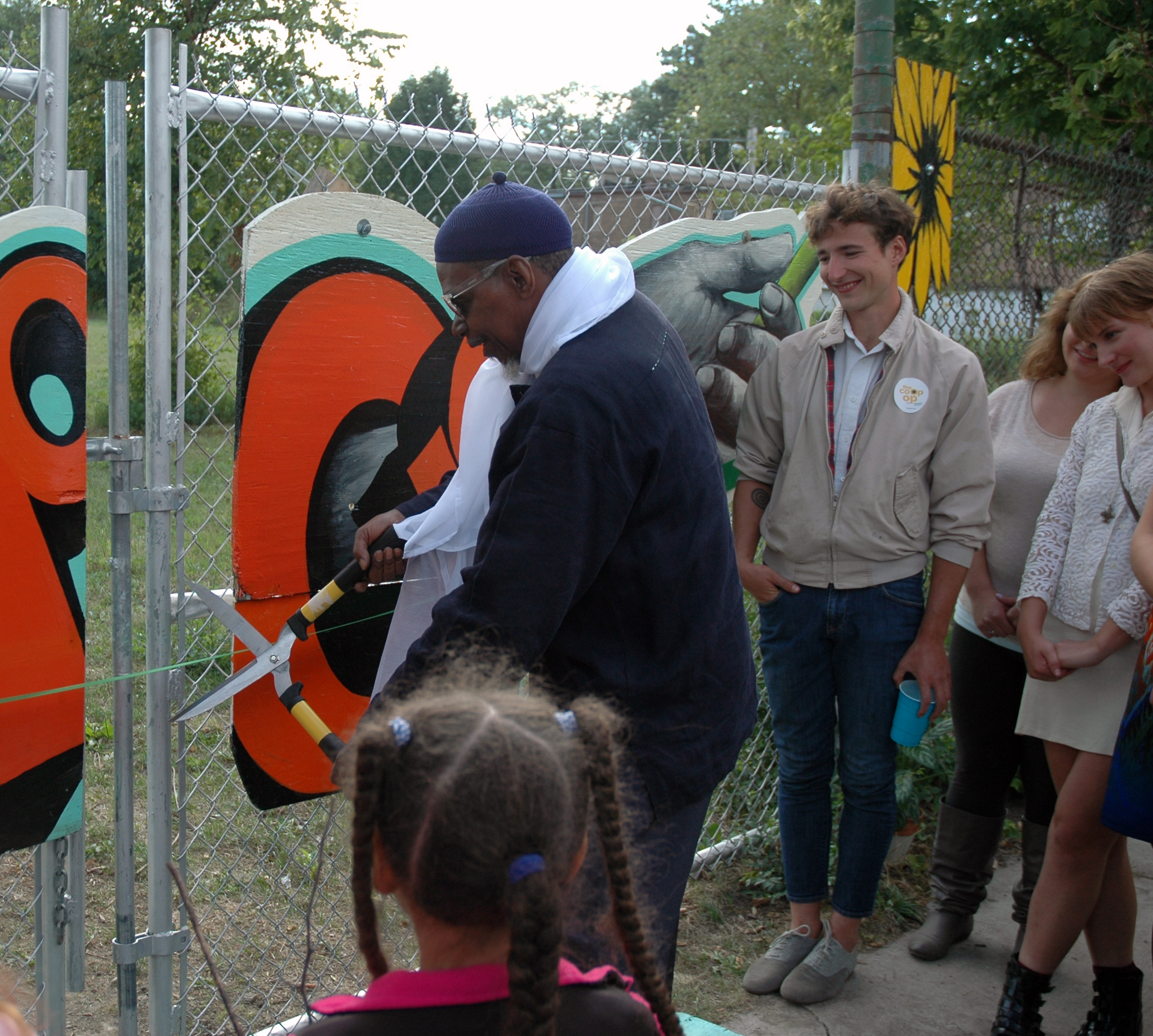 In 2003, the Environmental Protection Agency remediated a piece of vacant land in the Pullman neighborhood, which is located on the far South Side of Chicago near the Indiana border. The area was left vacant after a Sherwin Williams processing plant closed, and the building burnt down in the 1990’s. Like many vacant lots in cities across America, the land at 114th and Langley became a haven for crime and was contaminated with toxic chemicals. That is until Sunday, September 22nd when members and supporters of the Coop Op unveiled their new garden and community resource. 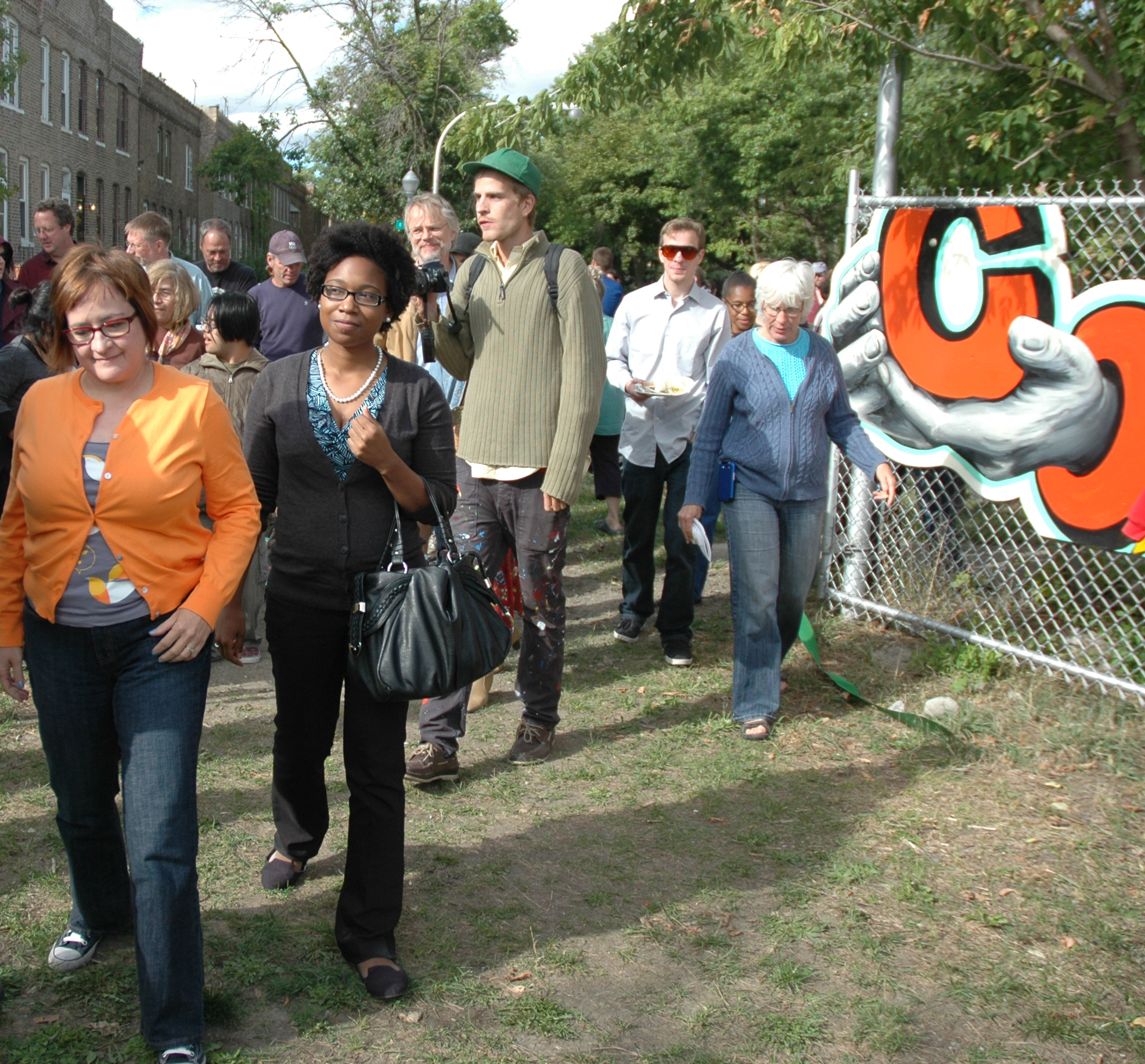 Guests of the ribbon cutting ceremony enter the new garden

“This site has been empty my entire life. I used to come back here as a kid, light fires, and do bad things,” said Justin Booz, the building and design chairperson and one of many founding members of the Coop Op. Booz grew up in the neighborhood, moved away for a time but came back just as Chicago’s version of Occupy Wall Street was beginning. Connie Lange, Justin’s mother, said the family moved to the neighborhood in the late 1980’s. Lange lives in a house near the 23,000 square foot plot of land, and now Justin and three other members of the Coop Op live nearby as well.

What was once a toxic vacant lot is now home to raised garden beds filled with kale, basil, tomatoes, cabbage, carrots, and even a few stalks of corn. Many of the beds are made from repurposed boats donated by a nearby marina, a partnership that another local community organization called Friends of Pullman helped to broker. Jessica Gorse, who helps the group host events and is working on an education plan for community members, explained how the garden gets many items it needs from the neighborhood: “The community has really helped and come through for us. Anytime we need supplies, we’ll send a list out and people will get cinder blocks and wood. Our tool shed is built out of old dock wood.” 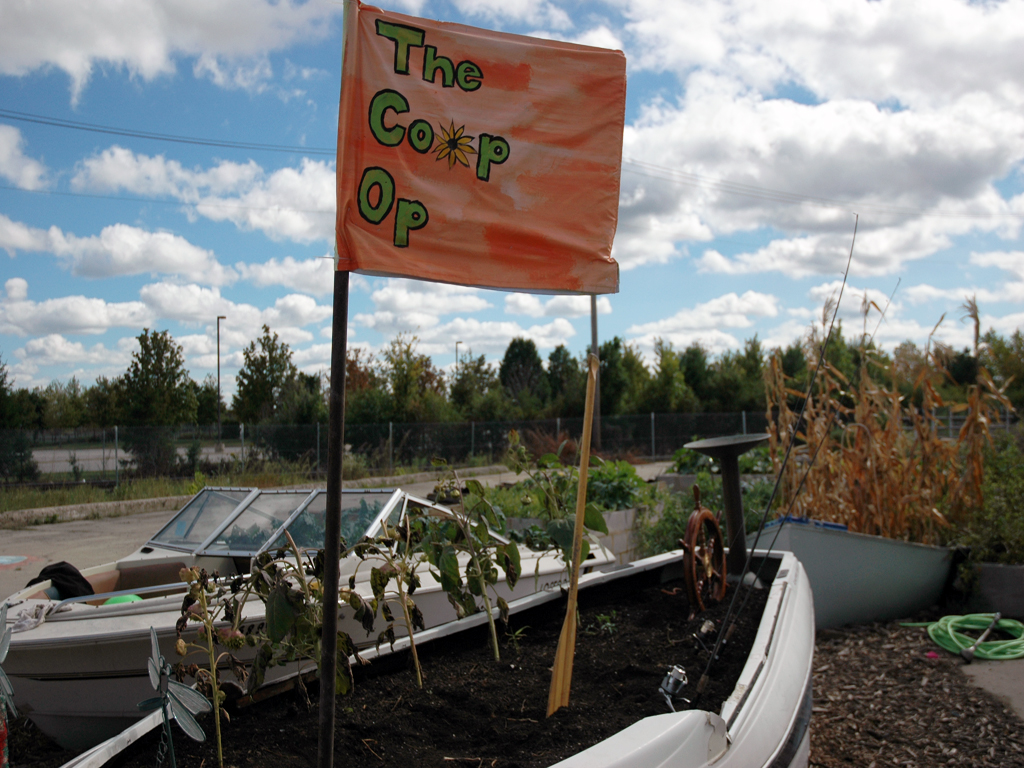 Since the group began building the garden, long time residents of the Pullman Neighborhood have been a part of the process. Charles Winston, who has lived in the neighborhood for decades, said he began volunteering his time from the beginning. “I just came on over,” he said. “I saw people over here so much and said ‘I should be over here volunteering my services too.’ If we can get everybody to do that, it’d be a wonderful thing.” Other neighbors saw the work being done and decided to lend their skills as well. “When we were converting our first donated boat into a raised bed, our neighbor Hakim from across the street came over,” said Monica Wizgird, the Coop Op’s secretary. “He’s lived in Pullman forever. He worked on the railroad for about 30 years and he schooled us on how to swing a sledgehammer. He’s at the lot all the time and brings his grandkids and dogs over to walk through. Some days he helps us work, others just to relax.”

Kim Haddon, another neighbor who lives on the next block, started volunteering her time at the beginning as well. In addition to teaching high school, Haddon has worked to merge her burgeoning catering business in the area with another resident named Lorraine Borchu. The pair used vegetables grown in the garden to prepare a large meal that included several salads, squash soup, potstickers, and a peach cobbler. “If you don’t know each other, you get to know each other with these kind of events,” Haddon said.

To get the project to this point, the group has put in more than nine months of work. After identifying the site and working with the local Alderman to secure the lot, members of the Coop Op donated money first from their own pockets to get things going. After hosting an initial fundraising event, the group turned to crowdfunding.

“We realized early on that we needed something a little bit more substantial to make the project possible,” said Wizgird. In a 25-day Kickstarter campaign, the Coop Op managed to raise $10,000. Crowdfunding a project like the Coop Op has also been a way for the group to work with their community of supporters, she said. “With crowdfunding, there’s this element of faith. If there are enough people who believe in you, you’re going to make your goal. There’s power behind that. If 188 people thought that what we were doing was worth it enough to donate, that kind of feedback gives us the knowledge that what we’re doing is worthwhile.”

In addition to working with the local community and reaching out to supportive people online, the group also works to be inclusive within itself. “This is where Occupy comes in,” said Booz. “Everything is horizontal. There’s no ‘leader,’ we’re all leaders in our own way. We all tag team on different projects when we need to. We make sure we provide a safe environment and safe discourse for people to get involved.” He added, “We lean on each other and make cooperative decisions.”

The biggest tie-in to the community, however, is the food. Pullman is one of Chicago’s many food deserts—areas where residents often have to travel miles outside of the neighborhood to find a grocery store. The Coop Op gives food grown in the garden away for free to anyone who wants it. “All of our produce is open to anybody in the community or any volunteers that come work with us. They can always just take whatever we have,” said Wizgird. She also said the Coop Op participates in farmer’s markets in the area, sometimes taking sliding scale donations that go back into local community organizations or the garden itself. 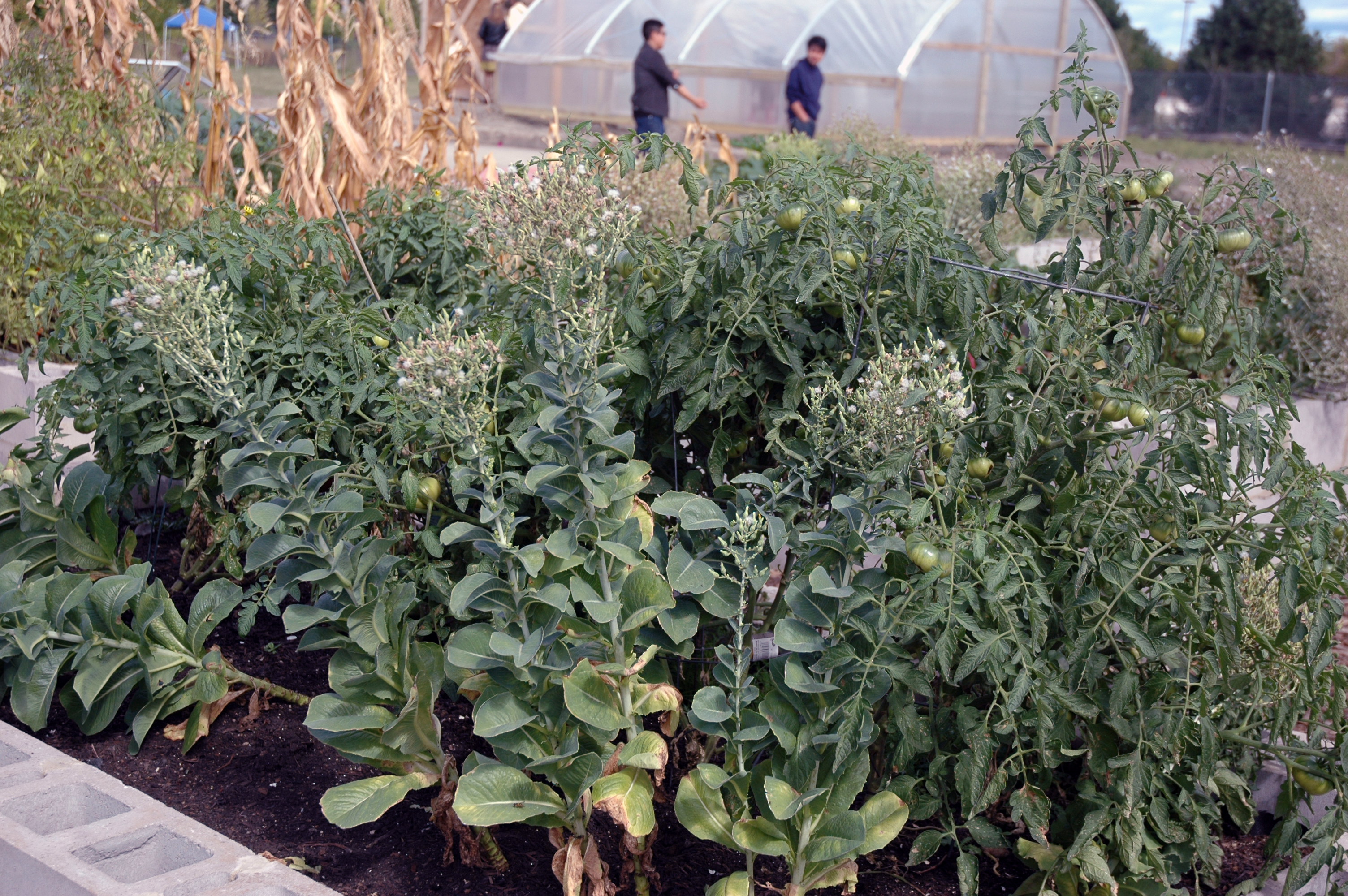 Produce in the garden is available to all neighborhood residents

Charles Winston said being in the garden has given him a new taste for healthier food options he might not have tried otherwise. “Since I’ve been over here now my cholesterol has been down,” said Winston. “That’s what I need, something different, instead of starchy foods, high cholesterol foods. It’s a start for me.” He added that the group was teaching him how to cook new things. “They’re going to teach me as I go along,” he said. 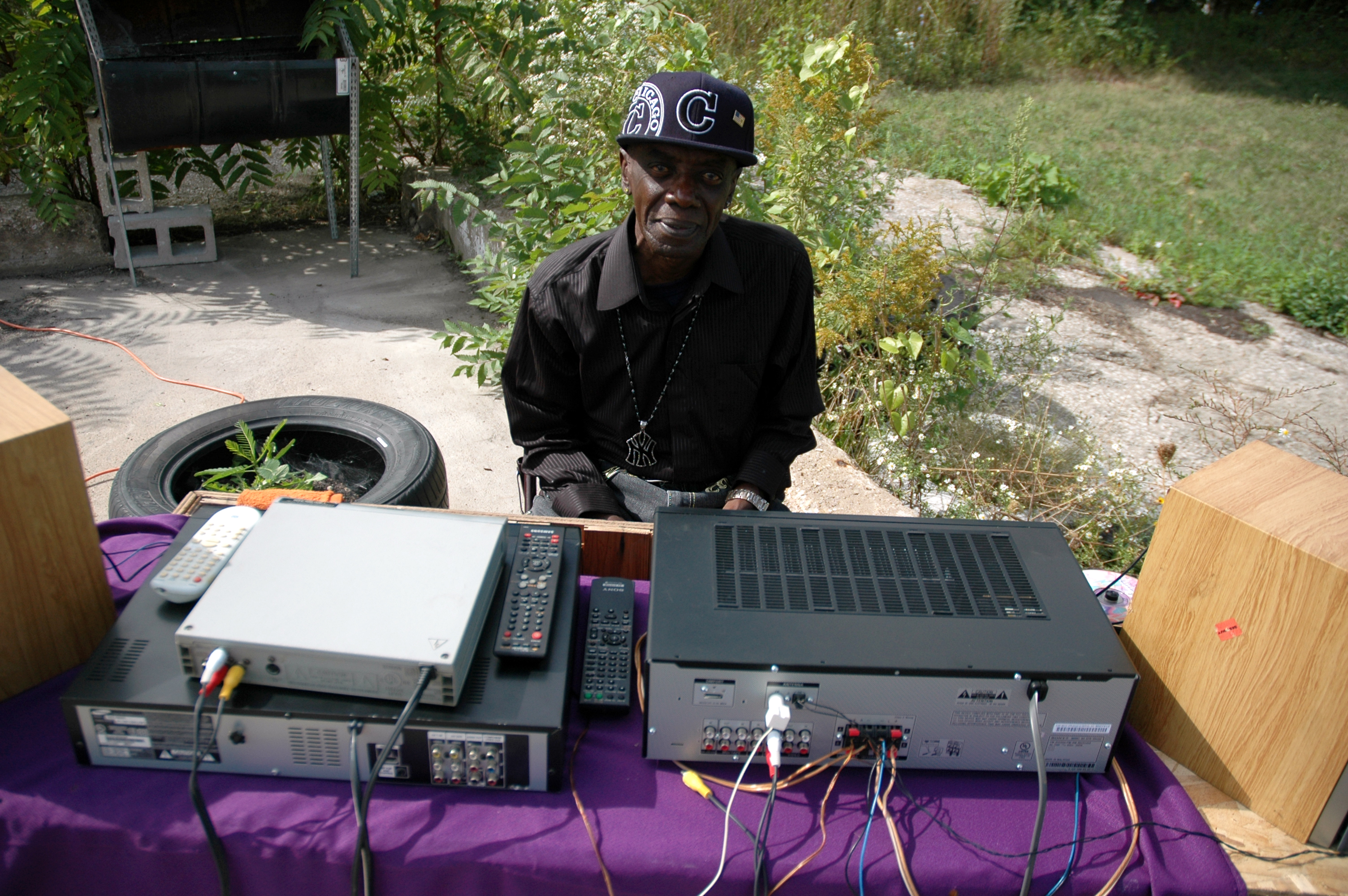 Charles Winston at the Coop Op

While community gardens are not a novel concept, the amount of outreach and involvement the Coop Op has had with the Pullman community and the greater Roseland area can potentially provide a model for others to reclaim long abandoned spaces. In fact, the Coop Op members hope to do just that in the future. Wizgird explains: “The idea is that this is the first of many green ribbons cut, the first of many greener spaces made out of abandoned lots. We’re trying to see those spaces as opportunities to keep doing what we’re doing and involve more people.”

(The author would like to note that, unfortunately, Mr. Winston passed away earlier this month.)

Aaron Cynic is the founder of Diatribe Media, an independent cooperative that since 2003 has featured and created content in forms ranging from zines to panel discussions and

Aaron Cynic is the founder of Diatribe Media, an independent cooperative that since 2003 has featured and created content in forms ranging from zines to panel discussions and podcasts highlighting independent voices and interests. He also produces various zines, and contributes regularly to Chicagoist along with many other outlets such as Truthout, Disinformation, The Occupied Chicago Tribune and others.