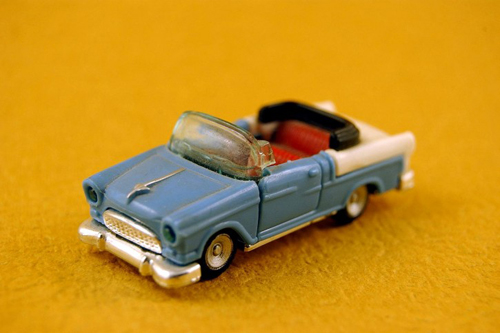 Liz Fong-Jones joined car sharing program Relay Rides because her car was sitting parked most of the time. An environmentally-minded M.I.T student and one-time Google employee, she saw that by renting it out, she could maximize the car’s use and potentially lessen the number of cars on the road. What she didn’t see was that she was about to become the subject of a debate about insurance and liability in the sharing economy. The man who rented Fong-Jones’s car was found at fault in an accident in which he was killed and four people in the other car were seriously injured. Insurance claims may exceed Relay Rides’ million dollar policy.

Commercial use of a personal vehicle is generally not covered by basic auto insurance and in most places, companies reserve the right to cancel or non-renew customers who rent their vehicles out. California, Washington and Oregon have all passed legislation that specifically prohibits insurance companies from canceling insurance policies and takes liability off of car owners who are car sharing. In states where no legislation has been passed, liability enters a grey area if insurance doesn’t cover car sharing and a claim exceeds the car sharing company’s insurance.

Shelby Clark, founder and chief community officer of Relay Rides feels that an accident in a car sharing vehicle would be treated like an accident in any other vehicle; that liability would rest on who was at fault. In such a case, when damages exceed coverage, one of two things happens: there’s a settlement for the insurance limit or else they go after the person at fault’s estate, which may result in the claim going unpaid or the creation of a payment plan.

Using a personal car for commercial purposes is nothing new in the insurance world. Pizza delivery businesses and real estate agents do it all the time – the individuals or businesses simply add additional coverage to their policy. What is new is the idea of people renting out their vehicles. Insurance companies don’t prohibit you from renting your vehicle, they just don’t cover it, and they reserve the right to cancel or non-renew insurance policies if a personal vehicle is being rented out.

There is no independent data being collected on this right now, but according to Clark, insurance companies are not canceling or non-renewing policies of customer who rent their personal cars out.

“People are already using their cars for commercial purposes and they’re not canceling insurance policies, mainly because it’s for a risk that they don’t cover,” he says. “Why would you turn away paying customers over a risk that you don’t have exposure to? An insurance company has the right to cancel your insurance policy if you rent out your car, but we think it’s very unlikely that that would happen.” 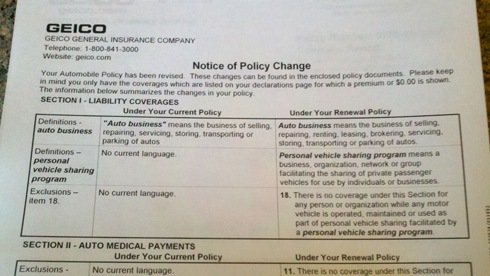 Insurance giant Geico recently modified its policy to state that car sharing is not covered; a move that Clark applauds, as he says it clarifies what is already being practiced. By excluding it, Geico is saying that it is not taking on any additional risk so there’s no reason to cancel the insurance policy of someone who is sharing their car.

Pete Moraga, spokesman for the Insurance Information Network of California speculates that other companies will follow Geico’s lead. “If Geico is doing that now, he says, “I guarantee you that there will be other insurance companies who will do that immediately, if they're not doing it already.”

Gaurav Kohli, founder and CTO of vehicle sharing company JustShareIt, takes a more conservative stance. JustShareIt also has a one million dollar insurance policy but they are only expanding into the three states that have legislation stating that the car owner cannot be held liable, plus Texas and Illinois, where insurance law doesn’t prohibit people from sharing their vehicles. JustShareIt won’t pursue the other states until legislation is passed in them.

“We’re going to markets where there is not too much liability,” he says. “In other places, if you use your car for commercial purposes, which basically is car sharing, then if any liability happens, the yes, the owner and others can have problems."

Despite the differing approaches among vehicle sharing companies, there is little evidence of policy cancellations. No one I spoke with in the insurance industry could say whether policies were being cancelled or not. With Geico modifying its policy and states creating legislation to prohibit insurance companies from dropping those enrolled in car sharing programs, the trend appears to be moving away from cancellations.

Clark reports that they have not had one person’s policy cancelled or non-renewed in their two-plus years of operation and that cars are oftentimes better insured when they’re being rented out than they are when they’re being driven by the owner.

“Our cars are some of the best insured cars on the road,” he says. “Our limits are many times higher than the state minimums. Our insurance limits are quite generous,” he continues, “but it’s sort of how our legal system and our insurance system work, that damages could exceed the claim limits and the claim would go unpaid.”

One possible reason policies haven’t been cancelled is that insurance companies have no way of knowing that a car is in a car sharing program unless it’s in an accident. Even then, Moraga says there would be communication between the insurer and the owner, detailing changes to the policy and providing the owner an opportunity to either leave the car sharing program or find a new insurer.

Something that Kohli and Clark agree upon is that the insurance arrangement for peer-to-peer car sharing in the U.S. could be much better.

In the insurance world, the personalized market and the commercial market rarely cross, but the sharing economy has changed this.

“The thing that’s so unique to sharing is that it really modifies ownership and liability,” says Julie K. Davis, vice president of brokerage, research and social media manager for Heffernan Insurance Brokers. “Traditional insurance products, whether commercialized or personalized, were all built on ownership and liability connecting together. Sharing modifies the concept.”

Unlike health care, which is regulated at the federal level, property and casualty insurance is regulated on a state-by-state basis. What this means for insurance companies is that they have to get insurance commissioners in each state to approve policy changes.

“Every state has their own legal issues and their own nuances,” says Davis. “Insurance carriers have to invest a lot of money to deal with all these attorneys and all these state legislative people. You have to look at it from their side,” she continues. “If they're being asked to spend an enormous amount of budget to get policy forms approved, they turn around and say, well how much of a premium is this going to generate for me. If it’s not going to generate a whole lot of premium for it, they don't really want to make a lot of effort to do it.”

She says that a lot of insurance carriers have had interest in the sharing economy and that some companies even have products in research and development.

“The best place to create the marketplace is on the commercialized side,” she says, noting that the sharing economy provides an opportunity for insurers to create a new insurance product that covers the owner, the car sharing company and the driver.

Like car sharing, home rentals through peer-to-peer platforms such as Airbnb are also in new territory when it comes to insurance. Basic homeowners and renters insurance doesn’t generally cover home rentals, but many companies will let you buy additional insurance. Airbnb has a million dollar Host Guarantee but the company stresses that it doesn’t replace homeowners or renters insurance but acts more like a product guarantee or warranty. In the event that your home is damaged by an Airbnb renter, the guarantee covers it.

The company’s terms of service states that personal liability and stolen goods are not covered by its Host Guarantee. This is typical of basic homeowners or renters insurance. If you want additional coverage, you can add it into your policy. Airbnb encourages its hosts to work, transparently, with their insurance providers so that they know what is covered in their policy.

According to Emily Joffrion, director of consumer strategy and insights at Airbnb, they have booked over 10 million guest nights and have not seen any cases of an insurance company dropping a host. In fact, the opposite has proven true. “We’ve seen the insurance industry open up to peer-to-peer insurance products,” she says, “because it is an area of growth for the industry.” She adds that Airbnb is “actively working with the insurance industry to develop unique products,” and is exploring options to offer liability insurance for hosts.

As with vehicle sharing, there are different models regarding home rental insurance. Couchsurfing is a free travel network with no money exchanged. Its terms of use states that it shall not be liable for damages of any kind.

Tripping, a community platform, connects travelers with people and aggregates home rentals from companies including Flipkey, Homeaway and Airbnb. The company relies on its partner sites for guarantees and/or insurance for both hosts and travelers. Tripping, like other peer-to-peer organizations also focuses on educating its community members on communication, safe traveling and protecting property.

“The way that we look at it and the way a lot of these companies look at it,” says Tripping founder and CEO Jen O’Neal, “is that we’re going to be here for a long time so we need to not only set up the infrastructure now but make sure that users feel comfortable using sites like this so that we can propel the sharing economy overall.”

When it comes to insurance within the sharing economy, the community is taking the lead and the insurance industry is trying to figure out how to follow. Many insurance companies seem to be taking the wait-and-see approach, but a great opportunity has presented itself to them to get in early on a rapidly-growing economic platform.

TrustCloud, a tool that measures your virtuous online behaviors and transactions to build a TrustScore for use in the sharing economy, has been collaborating with multiple insurance carriers to tailor products for the sharing economy using their TrustCard distribution platform. According to CEO Xin Chung, they've been solicited by multiple carriers.

"We can't disclose names," he says, "but we can confidently say we have solutions ready to address sharing risk at the transactional level, transforming our partners' risk from a cost center to a revenue generator."

“There’s a huge opportunity for insurance companies here,” says Clark, noting that Relay Rides has also had conversations with a number of companies. “For an insurance company, personalized vehicle policies are their bread and butter,” he continues, “but the nature of these relationships is changing. People want to buy mobility instead of a car. I think that insurance companies will have no choice but to recognize that consumer preferences are changing.”