Global Coworking Survey 2012: It's All About Having Fun - Shareable
Skip to content 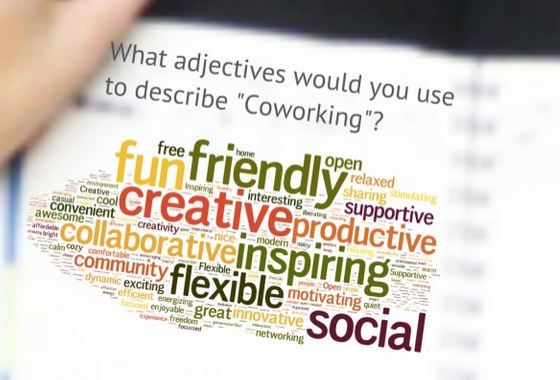 Since its birth almost eight years ago, the coworking movement has reinvented a completely new style of work focused around community, collaboration, and most of all, personal joy.

In its 3rd annual survey of mobile professionals from around the world, Deskmag found that despite explosive growth on almost every continent, the ever-evolving coworking community has remained true to its original principals. No matter what the size, shape, or location of the space, coworkers are forging new relationships, collaborating on projects, supporting each other, and growing the economy with nothing but a laptop and a smile.

Number of Spaces Continues To Grow

This year's survey attracted 2,007 coworking space owners, current and past coworking space members, and mobile workers interested in coworking. Respondents hailed from countries around the globe. Based on results and previous research, Deskmag estimates there are now 2,072 coworking spaces around the world–a 245% growth since the first 2010 survey.

As one might expect, this year's survey revealed the continued benefit of working in a coworking space instead of a home office or coffee shop. Seventy-one percent of the survey's 2,007 respondents said their creativity had increased since joining, and 62% said their standard of work had improved. Contrary to what you might think about flexible work spaces, 68 percent percent they're able to focus better when coworking, compared to 12 percent who said the opposite. Sixty-four percent said they were more likely to complete tasks on time if they were coworking.

In this year's survey – unlike in previous instances – participants were asked to choose words that best describe their coworking experience. Some of the top results were; fun, friendly, creative, inpsiring, productive, flexible, social and collaborative.

Most coworkers are so content with their workspace that they don't plan to leave. Sixty-nine percent said they have no plans to leave their current coworking space, while less than 5 percent will stay just for one month, disproving the notion that coworking is for traveling professionals only.

Coworking: Not Just For Freelancers Anymore 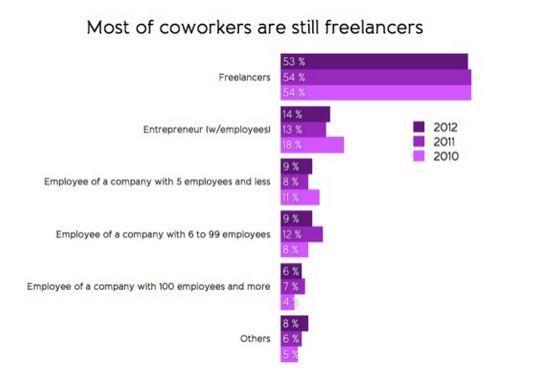 Also, while most individuals working at a coworking space still self-identify as freelancers (53%), other demographics are embracing the shared-workspace concept as well. The Survey found that 14 percent of coworkers are entrepreneurs with employees of their own, while approximately 24 percent are employees of a company.

Want to learn more? Check this slideshow of Global Coworking Survey 2012 results which was presented at the Coworking Europe Conference this week.