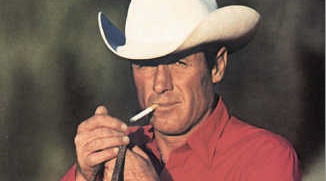 In response to my first post Vlad Solodovnyk writes:

How's that for a statement? We share a planet, languages, ideas. Individualism in extreme forms is self-deception: nobody can claim their life to be somehow independent from their mother, society, friends, and neither would it have been desirable in any way.

Individualism is self-deception. How true. 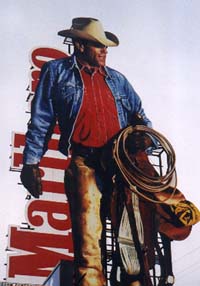 “No man is an island,” and yet America’s values have recently appeared to support the opposite. We Americans often identify as card-carrying members of the cult of the individual, virtual Marlboro ads stepped of the magazine page. This is a well-worn observation to be sure, yet a passing glance at the recent actions on Wall Street makes it more truism than cliché.

In fact we’ve never been lone operators. Our strongest successes are group-based. (Read Made in America for more on this topic.) But our individualistic mindset — a relatively recent invention — holds. The iconoic ‘lone operator’ image is part of a grand marketing scheme (yes, that Marlboro Man again…): It was created for us mid-20th century by advertisers in order to sell us products like the surburban mecca Levittown. For a taste read advertising guru Jerry Della Femina’s cult 1970 bestseller From Those Wonderful Folks Who Gave You Pearl Harbor.

So perhaps our individualistic tendencies are less about “self-deception” (apologies to Vlad) and more about the powerful marketing strategies that have bombarded us for 70+ years.

Of course, there have been groups who’ve fought against these manufactured-by-Mad-Men values (the ‘60s counter-culture comes to mind), but lasting change has been elusive. Yet, if our nascent movement is any indication, more of us appear to be ready to debunk the myth of individualism, unravel the past 70 years of me-focused behavior, rewrite the script, and get into a different, more collective mindset.

The first step, as they say in therapy, is acknowledging that we have a problem. Let’s acknowledge that deeply ingrained patterns of individualistic behavior are now second nature for many of us. We’ve lost those social sharing patterns that historically we’ve relied on to keep a healthy balance between us individuals and the groups we interact with.

I remember working with neighbors in Los Angeles cul-de-sacs to help them begin to share resources (childcare co-ops and car pools, leveraged buying power, etc). Invariably someone would speak up in an early meeting – often a little sheepishly – and ask: “Isn’t there an iPhone app we can use to do this!?” The thought of spending tons of time with neighbors, or even borrowing a cup of sugar, can simply seem overwhelming for many people, myself included. Not our fault. As I said, we’ve been marketed to.

So how do we go about fixing the problem? How do we start to reinstate those social sharing patterns? Do we need to mitigate the time drain and social uncertainties of sharing with digital tools like iPhone apps? Or will this undermine the human bonds that form when groups undergo adversity? Shall we simply sidestep the problem altogether and, like ZipCar’s approach, share anonymously?

Whose got thoughts, ideas or tips on balancing the individual with the group??