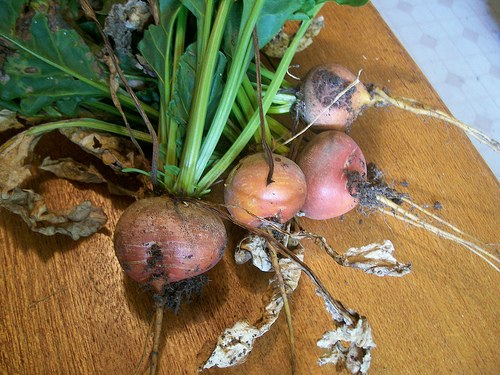 This piece was originally published by SF Public Press, a nonprofit news organization in San Francisco that aims to do for print and Web journalism what public broadcasting has done for radio and television.

Sweet potato bourbons, lemon meyer meringues and upside-down caramelized pear tarts. These are the three varieties of organic pies Jessica Stinnett is selling on a recent Thursday evening in the back room of a Mission District Victorian in San Francisco. The pear tarts are almost sold out so it’s a good night for her budding business venture, the Golden Crust.

Stinnett is one of a dozen vendors selected from 29 applicants for a spot in the first-ever underground farmers market organized by Iso Rabins, founder of ForageSF, a wild foods gathering cooperative. Much to the delight of local foodies — and to the chagrin of health department inspectors and regulators — ForageSF delivers local, wild-harvested food to restaurants and city dwellers.

The underground farmers market shares the same focus of Rabins’ primary venture — it’s a community-based approach to food. Rabins created the market because he wanted to give an opportunity for small vendors to sell their food without facing the steep price of a spot in San Francisco’s official farmers market, which can cost $500 plus a percentage of profits.

The market vendors hope to form small businesses — and ideally careers — out of their food enterprises.

“I think that there are many people in the city who are making really good food at a professional level but don’t have the resources to get a commercial kitchen or to get licensed,” Rabins said. “If you just want to sell jam, you have to get a business license, then a canning license, and then you need a commercial kitchen.”

Rabins added that while regulations are there for a purpose, many people can’t afford to follow them. “I thought it would be cool to create an environment where those people could get some exposure, get a leg up and take that first step,” Rabins said. The vendors at his market are experienced, according to his Web site, and typically share their products with friends. This is their first opportunity to sell goods to the wider community. 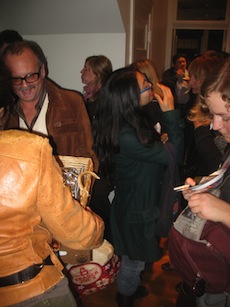 The market itself is somewhat surreal. It’s an in-home foods bazaar that’s like a dinner party, house party and street fair combined into one. Vendors stake claim to strategic spots in the empty second-floor flat. Some sell honey from a half bathroom, others sell home-brewed beer from a kitchen corner. Rabins is relaxed through it all, gathering donations and stopping to chat with enthusiastic visitors.

There are risks to forming underground markets. A health department official makes a brief appearance, briefcase and intimidating scowl in tow, before dispensing some generous, useful advice. If Rabins plans to organize a similar event in the future, he will be better off calling it a “club” rather than a “market.” Markets, it turns out, are susceptible to tighter regulations.

Rabins plans to organize another underground market sometime in February. The venue will most likely be improvised. Check his Web site and blog for further information: www.foragesf.com.