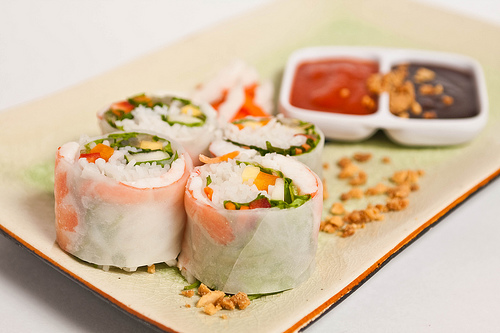 In 2009, Iso Rabins, founder of forageSF, began an experiment in San Francisco's Mission District. Operating out of a house, Rabins gathered seven food vendors to open the Underground Market – a place where newbie food entrepreneurs could test their wares on a willing audience of some 150 mouths. Over the course of the past year and a half, those numbers have grown exponentially, with more than 400 vendors and 50,000 eaters eagerly passing through the Market's door.

On June 11 of this year, the city's health department – bowing to pressure from the state – issued a cease and desist order on the grounds that the Underground Market could no longer be considered a private event. That “private event” designation had originally been utilized by Rabins on the advice of the very same health department. He organized the Market with sign-up sheets and memberships in order to color within those lines. Now, Rabins has requested a meeting with the city attorney to gain clarity on the private/public event guidelines so that the Market can be reorganized – and reopened – in an appropriate format.

Rabins knew there was no way the Underground Market's popularity boom would go unnoticed by the powers that be. With 30-50 new vendors applying to participate each month, it has also become crystal clear that a void exists within San Francisco's food world and, quite likely, in other cities where makers of all sorts flourish. This situation also puts in high relief the limits that the current policy regime around food, which favors large enterprises, puts on innovation and job growth.

In a letter announcing the closure, Rabins outlined his vision emphasizing the market's role in hatching new, innovative food enterprises:

We would like to see the market continue to exist much as it has because we feel that it provides a necessary venue for people starting new food businesses. We’re interested in providing a space for entrepreneurs who for a myriad of reasons are not able to abide by the regulations put in place. The regulations, upfront costs, red tape, and lack of clarity in procedures all too often stop amazing food from ever being eaten.

The market is used in different ways by different people. Some are home cooks that have always wanted to sell, but for various reasons have not been able. Cocotutti is a prime example. She sold her first chocolates at the market over a year ago, and has since won national awards, moved into a commercial kitchen, and is approaching markets to stock her goods. KitchenSidecar worked at a bio-consulting job, with a food blog on the side, before she found the market. Now she cooks full-time, caters, holds her own dinners, and collaborates on a Vietnamese pop-up restaurant called Rice Paper Scissors with another vendor, Little Knock. Nosh This was working as an architect before he was laid off and turned to the world of candy. Following his recent appearances in the New York Times, his wholesale accounts have exploded, he has moved into a commercial kitchen, and is working to make “Bacon Crack” a household name.

These are a few examples of people whose business, and some would say lives, have been changed because of their exposure at the market. People who have been able to earn money for themselves instead of populating the unemployment rolls. People who are contributing to the local economy while at the same time expanding the local food community.

We want the Underground Market to be a space for food entrepreneurs to get started on a small scale. And we want to continue to offer them more resources to move forward. We have seen the need for some time to have a space where vendors can produce their wares commercially. A space where we can hold classes on food safety/business, have commercial kitchen space for vendor use, retail space for them to sell, and café space with rotating chefs for them to cook. This space will be a hub, a place where people can come together around the wealth of food being produced in our city. We are starting work on looking for a space/getting details together on the project, and will send more information out soon.

This shutdown is an opportunity to find a workable model that can help not only The Underground Market in San Francisco, but similar markets all over the country. The precedent we set here will ripple across the country. It will effect not only San Francisco vendors, but vendors nationwide. From cottage food laws to street food, we’ve seen an explosion of opportunity for small entrepreneur food businesses pop up over the last several years. We will continue to move forward toward our goal of keeping the market open, and our struggle can be an opportunity to find yet another way to help this movement grow.

Read the full statement released by Rabins and get information on how to get involved.