Feed the Locavore in You - Shareable
Skip to content 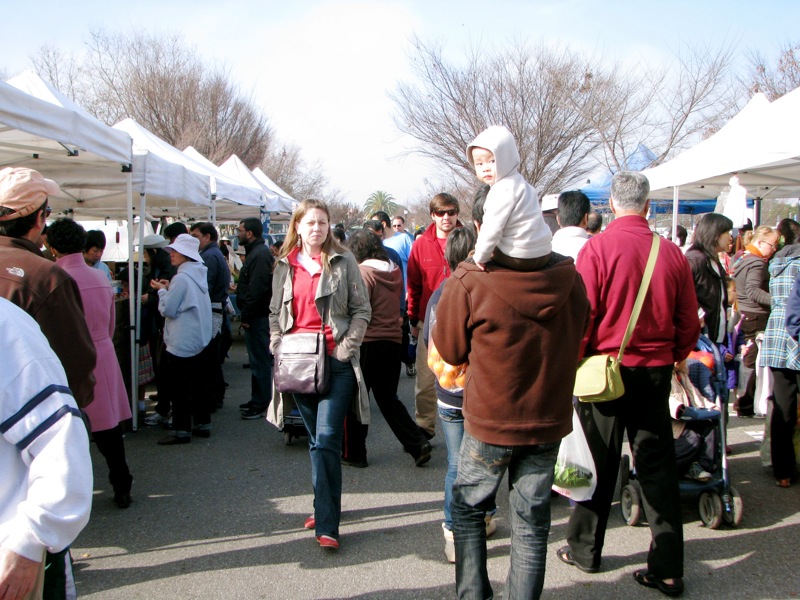 You've heard the old saying, "you are what you eat." Let's consider that for a moment. I think if we took that phrase literally and promised to answer honestly, very few of us could claim to be a raw fruit or vegetable these days. In fact, most Americans would have to admit to being artificial cheese or high-fructose corn syrup. However, and here’s the good news, perhaps a small but growing number of us would hold our heads higher and proudly affirm our existence as a locally-sourced food product.

If buying organic was at the top of our to-do lists over the last few years, there is now an even stronger movement that’s been gaining momentum recently. That movement is buying local. Urged by the economic recession to reevaluate our priorities and encouraged by the need to reconnect with our communities, many of us are frequenting farmers’ markets instead of large grocers, trading in Club Cards for community-supported agriculture (CSA) memberships, and choosing to support nearby farmers and local produce over food that has traveled in some cases thousands of unnecessary miles to reach us.

The San Francisco Public Library recently hosted an event as part of their series Farm to Table, investigating how local and organically grown produce shapes and influences future dining, specifically in San Francisco and on a national scale as well.

Among the list of inspiring panelists was Sam Mogannam, owner of Bi-Rite Market in San Francisco’s Mission District, who expressed his excitement that people are finally realizing exactly how important food is, not just to our health and our land but to our overall quality of life as well.

There used to be a direct relationship between the quality of food and its price, but, as most of us have realized, that relationship has drastically changed over the years. People demanded cheaper food and, sure enough, cheaper food was what they got. Artificially cheaper food, that is. Sure, they had extra income to spend more on other stuff (hence our unsustainable period of hyper-consumerism) but it was at the expense of the quality of their food, their health and, Sam would argue, their happiness. “Now those who are paying attention to where their food comes from are slowing down, getting inspired to cook more, to buy raw ingredients from local farmers and to share the food that they make with others.”

Another panelist, Dave Stockdale, Executive Director for the Center for Urban Education about Sustainable Agriculture (CUESA) offered insight from the farmer's perspective. “For a farmer,” he says, “selling directly to the consumer is much more economically viable.” The USDA followed the breakdown of a “food dollar” and released some interesting findings.

At a typical grocery store, whose costs include things such as rent, utilities, packaging, storage, and labor, the farmer may only see 20-30 cents of each $1 that the consumer spends on food. At a farmers market, on the other hand, farmers see a much larger percentage, as much as 90 cents on the dollar in some cases. As a result, consumers are quick to get behind farmers and support their local economies. More families are dedicating their outings to farmers markets, visiting their favorite stands and connecting their food with the face behind it. And they’re not the only ones. Restaurants are jumping on board as well and finding interesting ways to partner with local farms.

One of these restaurants is Spruce, headed up by Chef Mark Sullivan, who makes an effort to feature locally-sourced products on his menu. At Farm to Table, Mark spoke about Spruce’s relationship with SMIP Ranch, where the farmers grow vegetables to the chefs’ specifications. Mark enjoys getting his hands dirty and helps in the planting and harvesting of the organic vegetables that make it to Spruce. “It gives you a tremendous amount of respect for the product that is grown,” he says. “Sourcing your own raw products, being connected to the earth where it grows, being involved in the process, from crop selection to seeding to harvest, is every chef ’s dream,” says Mark. “The closer the produce is to harvest, the better it tastes, and the guests at our restaurants really notice that when the farm is in full swing.”

While it’s historically been easier for restaurants to negotiate better deals with farms, some communities have started using their own collective bargaining power on a local level as well. One example is communities who join together in purchasing an entire animal. Others participate in foraging or gleaning, two popular ways to collaborate.

Collaboration can be seen on the cooking sides of things as well. More and more chefs are joining shared kitchens, like the Mission’s La Cocina, to gain access to a commercially licensed space where they're able to cook their food.

With the multitude of trends we’re exposed to on a regular basis, some may be quick to peg buying local as yet another one. Jeannette Ferrary, a food writer and historian who also had a seat on the panel, attests, however, that the devotion to food in California dates back quite a ways. She tells of a movement back to community markets, back to the days when every household had a butcher, a produce stand, a bakery and so on. “Now with technology,” she says, “we’re given the necessary tools and information to cook different types of local and seasonal produce.”

Along those same lines, she mentioned the importance of being informed about the farm bill and discussed the Facebook page devoted to helping others understand the legislation behind it.

It's true that technology has come a long way in helping us become aware of our options and alternatives. The same goes for education. Every panelist present on Tuesday, as well as the moderator, Dava Guthmiller of Slow Food San Francisco, expressed their dedication to education programs. Slow Food helps to support school gardens and teaches kids how to value farming. “It’s the coolest thing to see a kid pick a leaf of kale from a plant that he or she grew and eat it right then and there out of sheer excitement.”

The term “locavore” refers to people who pay attention to where their food comes from and commit to eating local food as often as possible. This is one bandwagon that you’ll definitely want to jump on and there’s no better time than right now. Good Food Month runs from January 14 – February 20, and features grassroots events that showcase a myriad of food crafters creating tasty, authentic and responsible food, and the agricultural communities they are tied to. From farm visits to hands on pickling demonstrations to special menus about town, it will be a good time for the whole family. You might just turn around to find your little one nibbling on some kale.

After finishing school in Charleston, SC and spending a few years in Santiago, Chile and Florianópolis, Brazil, Cameron has most recently lived in our nation's great capital working for the

After finishing school in Charleston, SC and spending a few years in Santiago, Chile and Florianópolis, Brazil, Cameron has most recently lived in our nation's great capital working for the Brazilian government. A conversation, however, and a few months of planning with a good friend from life, Des, would send her in an entirely different direction, this time West to California. This next adventure would certainly challenge her in many ways but also deliver on exactly what she had been craving-- a movement back to the community. Based on their love for food, and the firm belief that sharing is clearly the way to go, Cam and Des created Grubly, an online, community-driven marketplace for the buying and selling of local, homemade food.

Things I share: Currently books, rides, and hopefully a bike very soon- just in time to enjoy the spring weather. :-) Oh and of course (my favorite), food! Yum! Come over anytime for a Grubly meal!