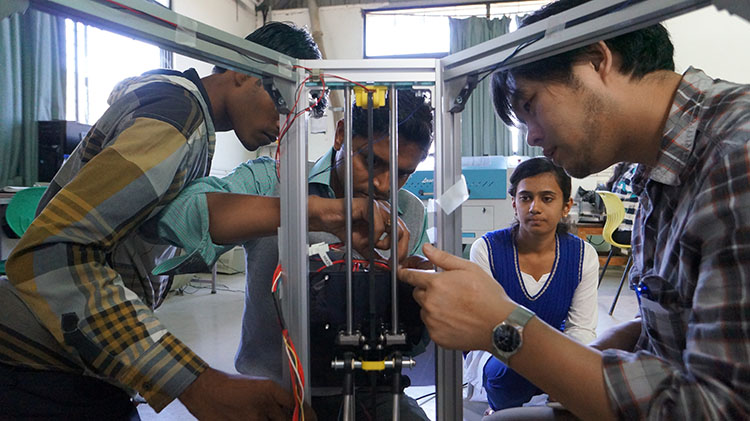 Here's the problem: How can consumers become producers? The shift from consumer culture to maker culture is often described in terms of a synthesis between consumers and producers —"prosumers." What practical steps can be taken for people to become prosumers?

Here's how one organization is working on the problem: In 2002, Neil Gershenfeld, from the Massachusetts Institute of Technology (MIT), visited India to teach and explore projects that overlap with his work on fabrication labs or "Fab Labs." Responding to the challenges facing the local community, Gershenfeld suggested developing a Fab Lab in Vigyan Ashram, an education center for science located in Pabal, India. The organization has been working with the local community of Pabal since 1983 to solve problems in the region with the help of low-cost materials and traditional tools. With a focus on self-managed sustainability, it has enabled the development of new models of peer production and local entrepreneurship.

The first Fab Lab outside of MIT, the Vigyan Ashram Fab Lab worked with MIT in procuring the latest tools and machines for collaborative production, rather than relying on ready-made solutions. Since then, several Fab Labs have been created worldwide.

Indeed, today there are some 665 Fab Labs in 65 countries. Taken as a whole, Fab Lab is a distributed international network of scientific researchers and community inventors who define, conduct, and apply new discoveries and inventions for the benefit of both researchers and the local community. Fab Labs support a global design commons where members design, code, share knowledge, and create digital instruction manuals using open-source principles. What gets designed in one lab can theoretically be fabricated in another lab, anywhere in the world.

The projects at the Vigyan Ashram Fab Lab emerge either from local researchers or the local community. Once projects are conceived, the organization passes them to its students and opens a global discussion within the larger network of Fab Labs to leverage open designs and shared knowledge. Several prototypes are made locally and tested within the community using shared assets (space, knowledge, tools) until the final design is developed.