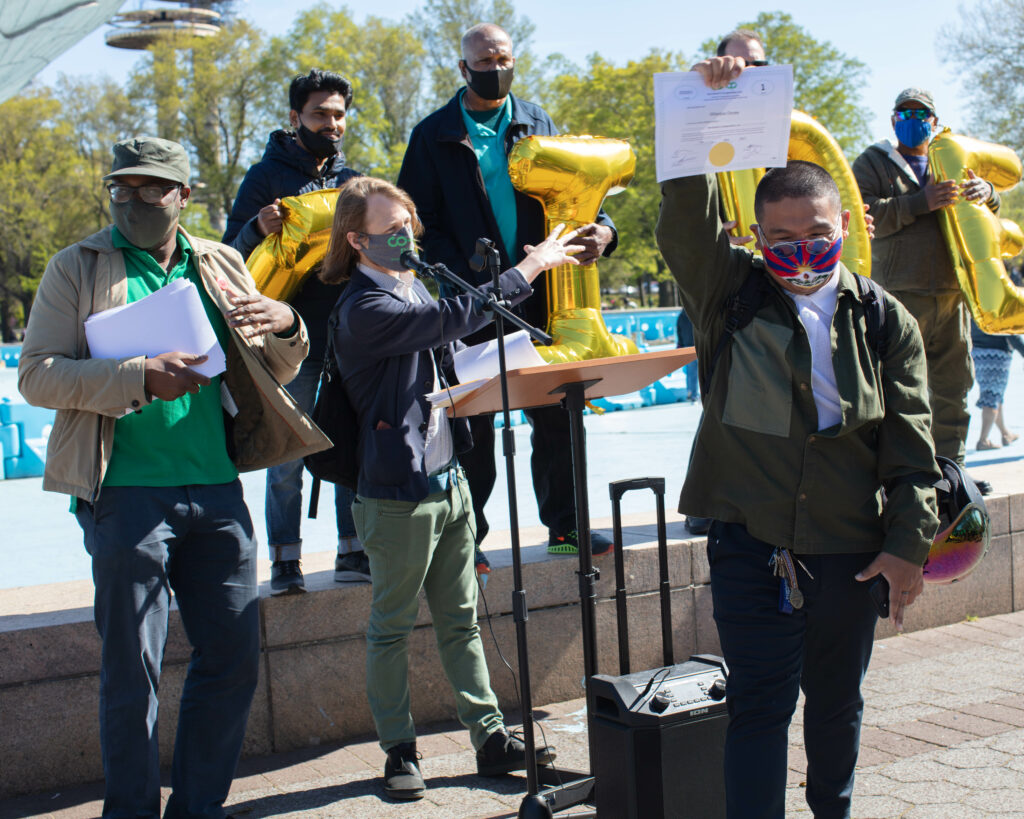 Member-owners of The Driver Cooperative ceremoniously gather to receive their respective shares of the operation.

Earlier this year, The Drivers Cooperative gained national attention when it launched a New York City-based ride-hailing app, Co-op Ride, which operates as an alternative to industry heavyweights like Uber and Lyft. What differentiates The Drivers Cooperative is its structure and business model: the platform is owned and operated by the drivers themselves.

The Drivers Cooperative isn’t the first worker-owned transportation company in the United States, but public awareness about how the COVID-19 pandemic has disproportionately harmed lower income communities and communities of color—while increasing the wealth of the ultra-rich—is generating new interest in business models that can help close the wealth and income gap.

The cooperative sector has been getting an upgrade in a multitude of ways, from efforts to change federal policy to innovative organizational structures and collaboration between business sectors. These advancements will make it possible for more worker-owned companies like the Drivers Cooperative to challenge the old ways of doing business and create a formidable cooperative economy where wealth and decision-making power are shared by those who are doing the work.

Addressing gaps in funding and mentorship

One promising development is the influx of money into the cooperative ecosystem, which could increase the prevalence of worker-owned companies. A 2020 study by the nonprofit Democracy Collaborative found a dozen new or emerging investment funds focusing on employee ownership transitions, said Karen Kahn, editor at Employee Ownership News, a site operated by the Democracy Collaborative.

One way businesses can access this capital is by working with incubators and other organizations that help start or convert existing businesses to an employee-owned model. Project Equity helps educate and transition traditional businesses to cooperative ownership.

“We have about half of small businesses in the country with baby boomer owners who are older than the age of 55 and this is going to create an enormous transition of businesses over the next decade or two,” Kahn said.

As it stands, a majority of aging business owners do not have a succession plan for what to do with their businesses when they retire. This problem also presents an opportunity, in Kahn’s view, since the employees of these businesses already understand the business and industry that they work in.

Then there are co-op incubators like Start.coop. Currently accepting its fourth cohort of businesses, Start.coop offers MBA-level workshops and coaching to up-and-coming cooperatives, linking them with an established network of alumni and potential funding sources.

“There is a huge generation divide in the cooperative movement,” said Nathan Schneider, founding board member of Start.coop.

Let’s give them support — and that doesn’t just mean financial investment, it also means mentorship. — Nathan Schneider, founding board member of Start.coop.

There is considerable wealth and power in the co-op movement, Schneider said, but he believes that those who have worked for some time in well-established co-ops need to find ways to support the younger generation.

“Let’s give them support— and that doesn’t just mean financial investment, it also means mentorship,” Schneider said. “There’s a pretty small number of people out there who really know how to scale cooperatives and who have done it.”

One of the older forms of worker-ownership is the employee stock ownership plan or ESOPs. These are programs where employees acquire shares in the company they work for.

But ESOPs are somewhat limited in that they do not typically give employees much say in how the business gets run or in how to divide up profits. “There’s certainly many examples of ESOPs that are basically just a retirement plan,” explains Kahn.

A newer development is an ESOP holding company. This is where a single entity buys many different companies and then gives employees ownership shares in all the companies in the holding company. One example of this is Empowered Ventures.

It diversifies the ESOP, Kahn said. “One of the criticisms of ESOPs is that people have all of their retirement dollars in this one company (although the good ones will also have 401K) but in this case, it’s diversified by having maybe a dozen different companies become a part of it,” she said.

In another shift, a growing number of companies are moving to an Employee Ownership Trust or EOT. This is similar to an ESOP, but EOTs allow workers to increase their income if the company becomes more profitable instead of only being able to access that money at retirement.

“What employees get is a profit sharing amount every year,” says Kahn. “So it increases their income substantially.”

There has also been some action on the policy front. Recently, the House Small Business Committee passed a $25 billion bill that would make it easier for those wishing to start employee-owned businesses to get loans from the Small Business Association. It would do this by eliminating the personal guarantee requirement, meaning entrepreneurs could access loans without having to use their own collateral to guarantee the SBA loan. This opens up those loans to systemically disadvantaged groups. The bill is part of the Build Back Better Act, which, at the time of writing, is still making its way through Congress.

Schneider contends that doing away with the personal guarantee requirement would be one step toward putting employee owned businesses on more equal footing with other businesses.

In Baltimore, an organization is using a mechanism not typically thought of as being a part of the solidarity economy: leveraged buyouts.

The Obran Cooperative uses investment money and loans to buy small and medium sized businesses, and then integrates those businesses and workers into a larger cooperative. This business structure allows Obran to diversify the risk at that business, explains Joseph Cureton, the company’s chief coordinating officer. “And it helps to increase the profitability because of economies of scope and economies of scale that we can achieve at the cooperative itself.”

The way worker-owned businesses have been internally managed hasn’t evolved much over the past decades. However, in the cryptocurrency community, there has been an explosion of decentralized autonomous organizations in the past five years. DAOs are often large, geographically-disparate digital collectives with specific goals, and in many ways, they resemble cooperatives.

DAOs and other cryptocurrency projects have also been experimenting with different forms of internal governance, using decision-making mechanisms and voting systems for many thousands of members.

“It feels like there’s a new voting system being invented every week in that community,” Schneider said of DAOs.

Traditional co-ops could learn from what works and doesn’t work in how projects are managed in DAOs.

“Whereas in the cooperative world, people are generally using the same kinds of governance practices that people used a hundred years ago, which is fine but probably not sufficient in the context of a rapidly changing world,” Schneider said.

Individuals who belong to a DAO can also hold a specific cryptocurrency associated with that particular project. The cryptocurrency has a tradeable market value and gives those who hold it some form of equity. All this makes DAOs functionally similar to ESOPs, but tech-enabled—and less regulated, for better or worse.

Schneider believes it is important to see worker-owned businesses as part of a larger cooperative ecosystem, where producer co-ops, purchasing co-ops, and worker co-ops all mutually reinforce each other.

“I really think that when people think about employee ownership, they need to recognize that employee ownership could be much more powerful if we combine it with other forms of cooperative ownership,” said Schneider, who has been active in the co-op space for some time and has written a book about it.

Even a single co-op can be more than just worker owned; its decision making can also include end-users, producers, and others. Those same stakeholders can also share the profits of what the co-op produces. Co-ops that operate like this are known as multiple-stakeholder cooperatives. One example of a multi-stakeholder co-op is Resonate, an alternative to the music streaming platform Spotify. Profits from the platform are shared between musicians, listeners and workers. Co-op members together decide the direction and future of the platform.

Another example of multi-stakeholder cooperatives is Amicus Solar out of Colorado, which started as a purchasing co-op for solar companies. Rather than a worker co-op, this type of cooperative enables smaller solar companies to band together and purchase solar equipment at a lower cost in order to be competitive with larger solar energy installers. Over time, Amicus started assisting its members to work toward employee-ownership, and today 17 out of 63 member businesses are in some way employee-owned.

Amicus also set up a national credit union called the Clean Energy Credit Union to address a lack of financing options for customers wanting to install solar. One of the founders of Amicus also had previously started an investment cooperative that invests in sustainable energy and cooperative businesses, so that created a new channel of funding for this ecosystem.

“So they’ve created a kind of ecosystem of multiple stakeholder classes that presents a model for scaling that isn’t dependent on any one kind of cooperative,” says Schneider, “but is about using the cooperative model in creative ways to address specific problems.”

For the latest trends in the worker-ownership, check out these related features: