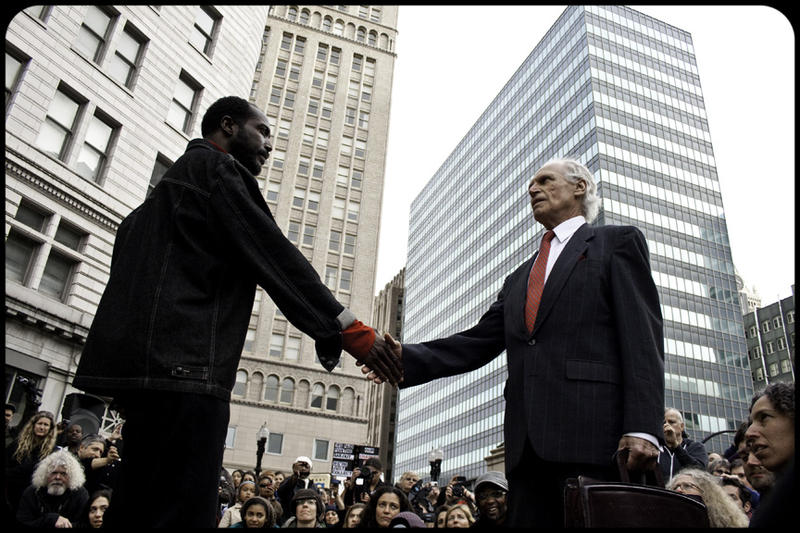 A day of hard rain and wind could not dampen the spirits of activists representing the 99% as they gathered at Justin Herman Plaza (dubbed Bradley Manning Plaza by locals) in San Francisco on Friday, January 20th, 2012, to mark the dark anniversary of the Citizens United Supreme Court decision with a day of action. Organized by a coalition of over 55 Bay Area organizations and dozens of OccupySF affinity groups, protestors disrupted business as usual with demands that banks end predatory evictions and foreclosures and that corporations lose the rights of personhood.

The day was called Occupy Wall Street West (OWSW), alluding to the power of the SF financial district and state in the global market – California is the 9th largest economy in the world. Activists executed plans for traditional nonviolent direct action to block the doors to big banks, effectively shutting down Wells Fargo Corporate Headquarters and occupying Bank of America’s main branch. And then came a surprise tactic: dance.

A flash mob called “One People” converged on the plaza affront the building that houses Bank of America and Goldman Sachs and commenced with a freeze. A single dancer called out “Mic check!” and the group responded, “Mic check!” and commenced a piercing scream of anguish, which collapsed into a die-in and then transformed into an upbeat dance. The dance gave a positive message for our collective future with creative prowess, illustrating a cry of pain against oppression and injustice, and, through street theater, invoking a powerful bridge of reconciliation between the 1% and the 99%. This is a bridge that can only span the chasm of class divide through significant financial reform and the recognition of shared humanity. The dance finished with a chorus singing “Now is the Time,” words from Dr. Martin Luther King’s iconic “I Have a Dream” speech, apropos to the actual time, since Dr. King’s birthday was observed a few days earlier. 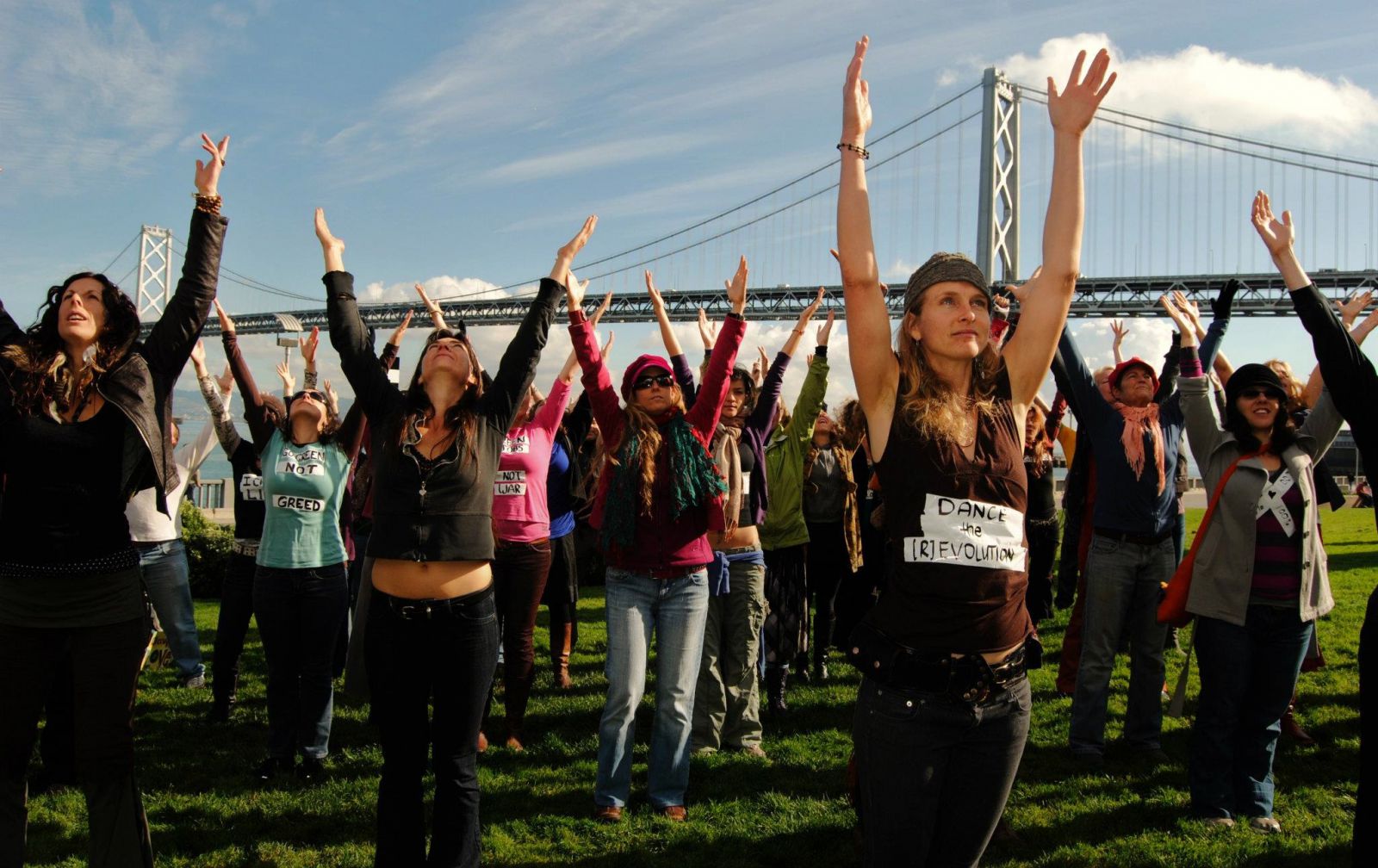 “The flash mob gives the opportunity for people across generations and walks of life to voice their rage and dreams for the future through public art,” said Magalie Bonneau-Marcil, who produced the flash mob and founded Dancing Without Borders. Former world-class athlete Bonneau-Marcil is using the organizing skills she learned from collaborative training for the Olympics to work for social justice. She started Dancing without Borders in August, 2011, to reclaim the healing and unifying power of free-form dance and flash mob as a ritual, community-building and empowerment vehicle for real change.

The One People flash mob appealed to many who felt an urge to support the message behind Occupy but were not inspired by picketing and marching. It brought together dozens of dancers between 8 and 80 years old, of all socio-economic backgrounds. For many, this was their first direct action and their first time dancing in the streets. It also brought together three women-led organizations: Dancing Without Borders, CODEPINK, and the San Francisco chapter of the National Organization for Women (NOW). Leaders of these groups believe that the power of the feminine is essential in cultivating this new movement, and sought to emphasize the role of women’s creative leadership through their collaboration on this project. CODEPINK has started a network of women across Occupies to weave this connection even further (see www.womenoccupy.org).

“Dance illustrates that it will take creativity and collective action to uplift American society and redirect our precious financial resources away from corporate greed and war profiteering and into green jobs creation, education, health care and renewable energy,” said Rae Abileah, co-director of CODEPINK Women for Peace. “We are the ones we’ve been waiting for. And we’re not waiting anymore!”

Flash mobs leverage the power of social media, art and collective participation, drawing attention to the essential messages of Occupy. A film showing footage of a recent performance of the One People flash mob had 150,000+ views on YouTube within a mere few weeks. Queer activists with SF Pride at Work created the “Occupy Telephone” flash mob in the lead-up to OWSW, to protest Wells Fargo’s role in the economic and housing crisis, and their video has also been seen by thousands on YouTube. From the massive “I Will Survive Capitalism” parody flash mob during the Occupy Oakland General Strike to the “Democracy is Dead” shopping mall die-in flash mob from Occupy Sydney, Australia, footage of flash mob actions is creating a visual declaration of accessible, celebratory, and action-oriented art.

“The Occupy Movement is not a war against evil,” said Bonneau-Marcil. “And if that’s how we frame it, it will never produce the results that we seek. This is a movement that’s about accelerating the shift of consciousness away from separation and scarcity.” The OWSW Day of Action raised awareness by engaging hundreds of people in action; generating major mainstream media coverage of the myriad of colorful protests, arrests, and creative disruptions; and putting big banks and investment firms on red alert. Many reporters and politicians have asked what the demands of the Occupy Movement are; this flash mob responded to those questions by embodying solutionary thinking and revealing a new narrative of reconciliation.

Dancing is not the answer, but it is an important tool to reveal and amplify the vitality, dignity and resilience of this growing global movement. As Bonneau-Marcil proclaimed, “You can’t evict an idea that has been embodied.”

This article was written by Rae Abileah, codirector of CODEPINK, rae@codepink.org, with contributions by Sharon Shay Sloan, Eva Lyons, and Magalie Bonneau-Marcil. The One People flash mob was organized by Magalie Bonneau-Marcil, founder of Dancing without Borders, who lives in El Cerrito, CA and can be reached at m@dancingwithoutborders.org.

Quebecois native based in northern California, Magalie produces and directs public interactive dance for social change including flash mobs. She is the founder of Dancing without Borders. Magalie deeply believes

Quebecois native based in northern California, Magalie produces and directs public interactive dance for social change including flash mobs. She is the founder of Dancing without Borders. Magalie deeply believes in the power of collective healing, celebration and embodied human spirit. Through dance and rituals she invites everyone to rise, to love and to be who we really are through our bodies. Magalie has a background in life coaching, yoga, ecstatic dance, world-class sailing, transformational leadership and spiritual activism. She is a certified professional coach and passionate about integrating her experience in personal development with rituals, world music and weaving community.