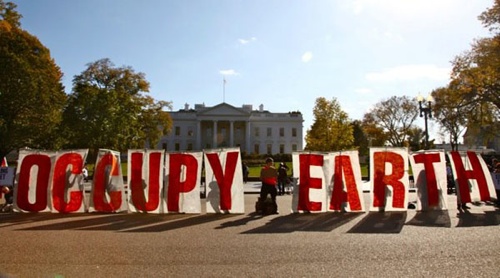 The Occupy Movement continues to capture the hearts and minds of the precariat, and is provoking a reconsideration of more than just the inequities of the current global economic system. Occupy is operating as a lab in which to test new ways of thinking about horizontal organizing, collaborative decision-making, and even the dynamics of interpersonal relations.

In the view of filmmaker Velcrow Ripper, director of the documentary Occupy Love, at its core the Occupy Movement is based upon the very simple but fundamental principles of compassion, interdependence, and yes, love for your fellow human beings. Velcrow Ripper is in the process of filming the documentary, and has already lined up an impressive roster of interviews with vocal activists in the movement and widely-appreciated supporters, including Naomi Klein, Marina Sitrin, Rebecca Solnit, The Yes Men, Angaanaq, Clayton Thomas Muller, Malik from Occupy the Hood, Rebecca Solnit, Asmaa Mahfouz, Bill McKibben, Penny Livingston Stark, Rob Hopkins, and many more.

In the following teaser clip of Occupy Love, Ascent of Humanity author, and Shareable contributor Charles Eisenstein speaks about the Occupy Movement’s potential to transform not only how we think about the economy and social justice, but also the fundamentals of human interaction, exclaiming, “This movement isn’t about the 99% defeating or toppling the 1%. You know the next chapter of that story, which is that the 99% create a new 1%. That’s not what it’s about. What we want to create is the more beautiful world our hearts tell us is possible. A sacred world. A world that works for everybody. A world that is healing. A world of peace.”

The filmmakers are soliciting contributions from people who want to become “community film producers”. To support the production on the film, head over to IndieGoGo and donate.