Dog Parks, Humans and the Commons - Shareable
Skip to content 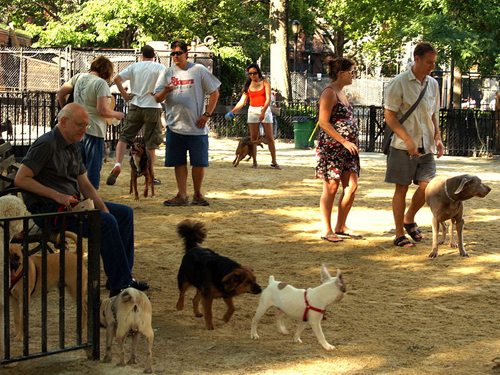 Dog parks are popping up everywhere. They’re among the most popular urban amenities and demand for them has been steadily increasing since the first one was introduced in Berkeley, California in 1983. In 2010 there were 569 dog parks in the 100 largest U.S. cities and the popularity of dog parks continues to grow They offer dogs a place to play off-leash, get some exercise and socialize, and they’re good for humans too. Dog parks provide us an opportunity to get outside, meet our neighbors and spend quality time with our pets. And it turns out that they can teach us something about the commons.

A recent study conducted by Daniel Matisoff and Douglas Noonan of the Georgia Institute of Technology was set up to “test the relationship between the perception of the park as a successfully governed common resource pool (CRP), and behaviour which contributes to collective action, such as contributing time, money, or to the upkeep of the park and developing a sense of community.” In other words, they wanted to know if people were more likely to get involved in the maintenance and community of a dog park if it appeared to them to be a well-maintained dog park with a strong community. There’s a bit of chicken-or-egg thing here, but the results prove interesting and shed some light on commons of all kinds.

Researchers focused on the Piedmont Park Dog Park in Atlanta, Georgia where they surveyed 298 park users about their use of, perception of and participation in the park and its community of users. They tested the park against Nobel prize-winning political scientist Elinor Ostrom’s design rules of CRP effectiveness, which include such guidelines as setting clear boundaries of use, providing self-determination to the community, having ways for users to participate in rule-making and having an affordable and convenient conflict resolution mechanism.

What they found was a connection between perceived involvement in rule-making and volunteerism. It seems that when it is made clear that community involvement is necessary or desired, that people are more likely to get involved. But interestingly, when the idea of having sanctioning mechanisms was presented, people reported that they would be less likely to be involved; that they prefered the self-governance that emerged naturally. The sense among survey participants was that the community of regular park users was able to handle, with peer pressure, or if necessary, park official involvement, any disputes or disagreements that arose. The study found that the park is generally self-regulating with “a core group of people who reinforce norms, monitor, and sanction.”

In keeping with the complexities of the commons, the study also revealed that some people had issues with the park and the way it was run. For instance, some reported having problems with aggressive dogs, going through a costly dispute-resolution, and not feeling part of the rule-making process. But reports of these instances are rare and there are “nearly universal” reports of park user self-monitoring, in addition to an informal governance by the “sense of community.”

While this particular study is limited by only looking at one dog park in one city, it reflects a way of thinking that is demonstrated in parks all over: people tend to take care of those amenities that they value and feel a part of. With relatively little official oversight, park users clean up after their dogs, deal with problematic situations and have respect for the park, the dogs and each other.

Sounds like a pretty good model for the commons to me.